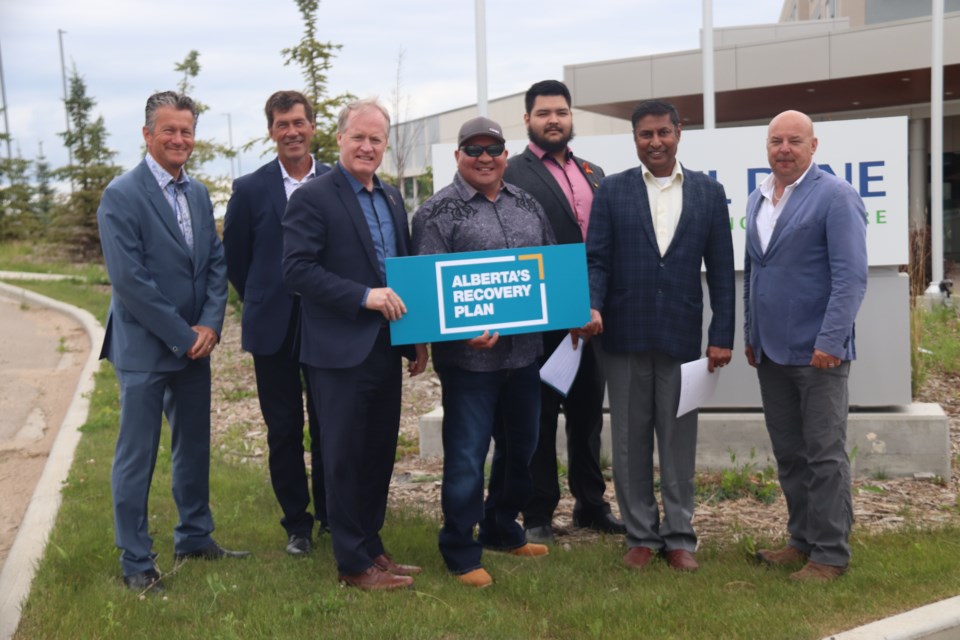 COLD LAKE - Those living and working in Cold Lake First Nations (CLFN) will have better access to something that is no longer considered a luxury, but an essential.

Alberta's Minister of Infrastructure, Prasad Panda, was in Cold Lake this week to announce the provincial government would be financially assisting the local First Nations community in their LTE Fixed Wireless Upgrade Project to a tune of $361,066.

The project, which is funded through the Investing in Canada Infrastructure Program (ICIP) is expected to start later this year, once all regulatory and financial requirements are met, said Marten.

“After the pandemic, all of us realized everyone requires reliable and stable Internet to do their day-to-day activities, whether that’s working from home or for students to do learning from home. It’s an essential, it’s no longer a luxury,” Panda stated during Tuesday's announcement outside of Casino Dene.

Bonnyville-Cold Lake-St. Paul MLA David Hanson said, “We learned quite a bit during the pandemic. We shut down schools and kids without connectivity were on the losing end of that. We need to ensure we have connectivity for everybody, that includes the kids on CLFN.”

Through the federal government's ICIP, the province has roughly $3.66 billion in federal dollars to invest in infrastructure projects that strengthen economy and build resilient communities, something Marten believes the CLFN wireless upgrade will do.

“Beyond the economic opportunities this project will provide, we are proud to be improving overall community and wellbeing through this increased Internet capacity.”

“As we evolve, seeing that transition toward reliance on technology for meeting every day, it’s definitely brought it into a light where it’s a necessity not just a luxury for a lot of people,” he expressed. “With it being the 21st century and that huge jump in technological advance, it’s going to be that much more needed going into the future and a very key and vital part of people’s lives."

"Their area here is huge, and I think the ability for everybody to have Internet no matter where you live on CLFN is fantastic," he expressed. “This is just going to improve the quality of life that much more."

"It’s good news for CLFN. I know going through the whole process of having kids at home and trying to have them all connected that this is going to be a benefit, certainly in regards to business opportunities for the nation as well,” MD of Bonnyville Reeve Greg Sawchuk noted.

This is one of many projects approved for ICIP dollars throughout the Cold Lake region.

The total cost of the ICIP projects in Cold Lake rings in at approximately $3.9 million, with a total of 22 jobs created - two through the CLFN project, four through the fleet enhancement, and five from the trail network upgrades.