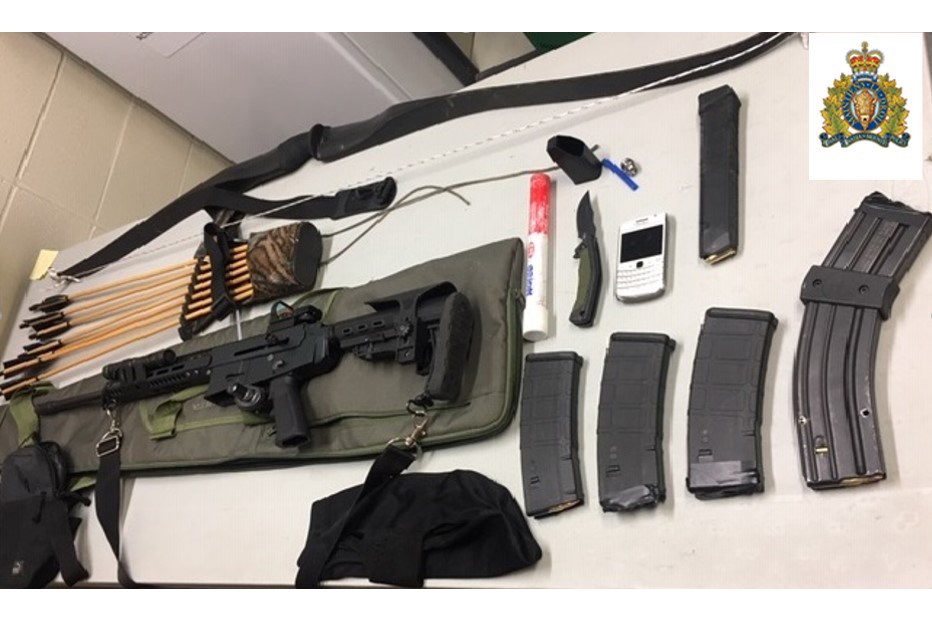 A number of items were seized following a police pursuit on Oct. 27. RCMP photo.

On Oct. 27, 2020, at about 2:30 a.m., a Cold Lake RCMP officer noticed a suspicious vehicle with a stolen license plate. The officer initiated a traffic stop, but the truck fled the scene at a high rate of speed.

The vehicle entered a field, where it got stuck and the suspects continued to flee on foot, according to RCMP. The RCMP Police Dog Service was deployed and three suspects were arrested.

One suspect did suffer a minor injury from a dog bite. PDS located a loaded AR-15 style firearm and a duffle bag with several loaded magazines, near the truck.

James Lees, 22, was charged with 33 offences, some of which include flight from police, dangerous operation of a motor vehicle, driving while prohibited, possession of stolen property, and more.

Lees was remanded into custody and is set to appear in Bonnyville Provincial Court on Nov. 3.

Myles Desjarlais, 40, was charged with 17 offences, some of which include flight from police, dangerous operation of a motor vehicle, possession of stolen property under $5,000, and possession of a prohibited weapon, along with other charges.

Desjarlais was released and set to appear in Cold Lake Provincial Court Dec. 8.

Miah Hartley, 18, also faces a number of similar charges in relation to the incident. Hartley was released and set to appear in Cold Lake Provincial Court on Dec. 8.

COVID-19 case confirmed at Cold Lake Lodge
Nov 20, 2020 11:45 AM
Comments
We welcome your feedback and encourage you to share your thoughts. We ask that you be respectful of others and their points of view, refrain from personal attacks and stay on topic. To learn about our commenting policies and how we moderate, please read our Community Guidelines.