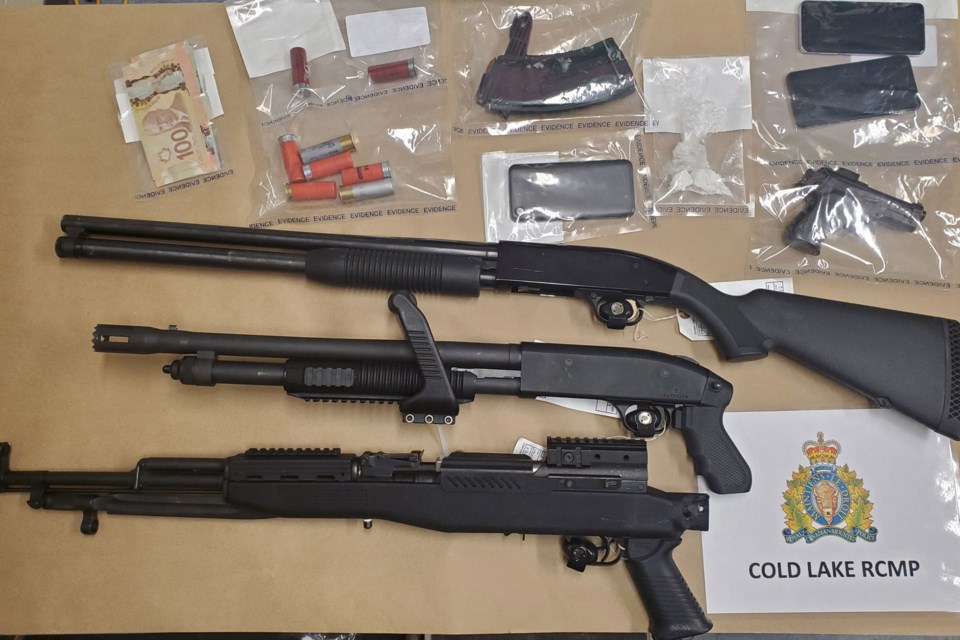 Police seized a two-pump action shotgun, an SKS rifle, crack cocaine, Canadian currency, and an imitation handgun as a result of their investigation. Photo provided by RCMP.

COLD LAKE - Three suspects have been arrested and charged in relation to a Jan. 7 home invasion.

Justin Michael Kellerman, 37 of Ardmore, Jason James Cardinal, 32 of the Elizabeth Métis Settlement, and a third suspect that has been arrested but name wasn't released by RCMP at this time, are in custody following a Jan. 7 home invasion where three armed males forced their way into a Brady Heights residence in Cold Lake south.

Two of the suspects were taken into custody without incident while the third suspect fled from police in a stolen vehicle before turning himself into RCMP the following day. He was arrested for unrelated charges after the stolen vehicle was located at his residence.

Kellerman is facing 22 charges including robbery with a firearm, break and enter with intent, pointing a firearm, possession of a weapon for a dangerous purpose, uttering threats, possession of cocaine for the purpose of trafficking, assault, and disobeying a court order.

Cardinal has been charged with 17 offences including robbery with a firearm, break and enter with intent, pointing a firearm, possession of a weapon for a dangerous purpose, uttering threats, assault, and disobeying a court order.

Both males remain in police custody and will be appearing in Cold Lake court Jan. 22.

The RCMP won't be providing any further details as this matter is now before the courts.

NLPS one step closer to addressing high enrolment in Cold Lake
Feb 16, 2020 3:00 PM
Comments
We welcome your feedback and encourage you to share your thoughts on this story. We ask that you be respectful of others and their points of view, refrain from personal attacks and stay on topic. To learn about our commenting policies and how we moderate, please read our Community Guidelines.