Clippers are looking forward to getting on the ice again 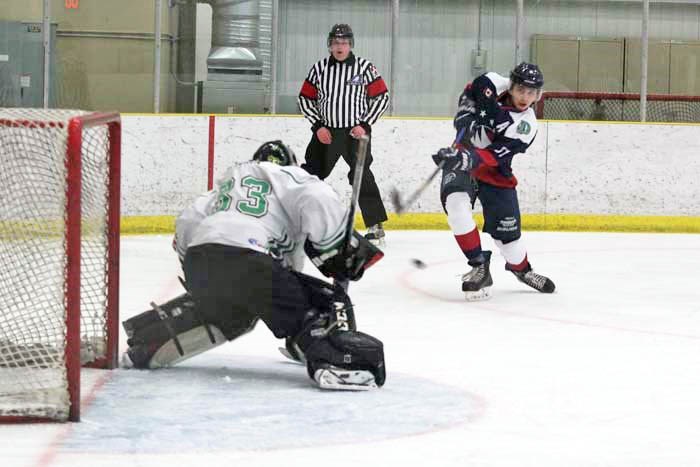 Final-season Clipper Dawson Boucher, seen here shooting on net in a file photo, is looking forward to competiton of league play — even with COVID challenges.

Lac La Biche Junior B Clippers fourth time returning player, Dawson Boucher, is excited to get back on the ice again for the teams first game of the season this weekend.

It’s his final year playing right wing for the Clippers, and Boucher is wanting to finish his last year strong. Although the Junior B teams are only able to play 12 games this season, as opposed to their usual 32 because of COVID-19, Boucher is just wanting to play the sport that he loves.

Since the COVID-19 pandemic halted the team’s post-season championship series with St. Paul in March, and has now delayed the new season’s start, it’s been a long time between games, says Boucher.

“I’m just looking forward to playing hockey again, and to play with the guys that I’ve always played with. We’ve been having practices every Tuesday and Thursday, and this past weekend we played an inter-squad game to get ready and get into game form, so the boys are pretty excited,” said Boucher.

The major COVID-19 changes made to the Junior B season is that now teams have to play in cohorts. Each cohort will have one away game and one home game against the selected team, and then they will have to wait 14 days to play another team. Players' temperatures will be checked before entering the building, and they will also have to fill out the COVID-19 health screening questionnaire to see if they are fit to play.

While it’s his last season with the local Junior B squad, Boucher says there are a lot of up-and-coming players ready for this season and the ones that follow.

Boucher says the Clippers have a lot of new faces this year, with only a handful of returning players, which means as an older player, he will be looking out for the younger players.

“We have a pretty young team this year, so with the new players we have to mesh them into the league a little bit because they are going to be the future of the team, so we just have to be leaders for the younger guys. The goal is to improve as a team and try to win the championships,” Boucher.

Last season, the Clippers climbed the rankings all the way to the championship finals to play against the St. Paul Canadiens, but because of COVID-19, all sports had to be cancelled. To the dismay of Boucher and the rest of the team, the finals were never rescheduled, so there is and never will be a clear winner for the 2019/2020 Junior B Hockey season.

“Hearing that the finals were cancelled was pretty tough. We were all looking forward to it, and we knew it was our year to pretty much win it all,” said Boucher.

“With the players, managers, and coaches together we had a well-rounded team, and for the season to come up short was pretty heartbreaking.”

While the Clippers are lined up to play the Canadiens in their first round of home-and-home cohort games starting this Sunday in St. Paul, the game isn’t officially being seen as a re-match of last season’s championship series.

In the 2019/2020 season, the Canadiens and Clippers faced-off six times in league play, with the Clippers winning five of those games. Going into last season’s playoffs, the Clippers were in top spot in the Northeastern Alberta Junior B Hockey League, nine points ahead of third place St.Paul. Leading to what should have been their championship series, the Clippers and Canadiens had similar playoff records, with each team sweeping their quarter-final opponents and winning their semifinal series in five games, knocking out Wainwright, Lloyd, Vermilion and Cold Lake.

The Canadiens have already played two games in the current season, beating the Vermilion Tigers in both games. The Canadiens are hosting the Clippers after a 14-day rest from those games.

After Sunday’s opening game, the first home game of the COVID-season for the Clippers is Tuesday, Nov. 17 at the Bold Center. The puck drops on home ice at 8 pm.

Coronavirus protocols will be in place at the Bold Center arena, limiting seating at the rink to just 100. Soial distancing measures are also in effect throughout the building.

For the game this Sunday, the Lac La Biche team is set to play an away game against St. Paul, and a home game the following Tuesday, November 17, at the Bold Center at 8 pm.

Lac La Biche RCMP want life-saving items returned
Nov 18, 2020 2:46 PM
Comments
We welcome your feedback and encourage you to share your thoughts. We ask that you be respectful of others and their points of view, refrain from personal attacks and stay on topic. To learn about our commenting policies and how we moderate, please read our Community Guidelines.