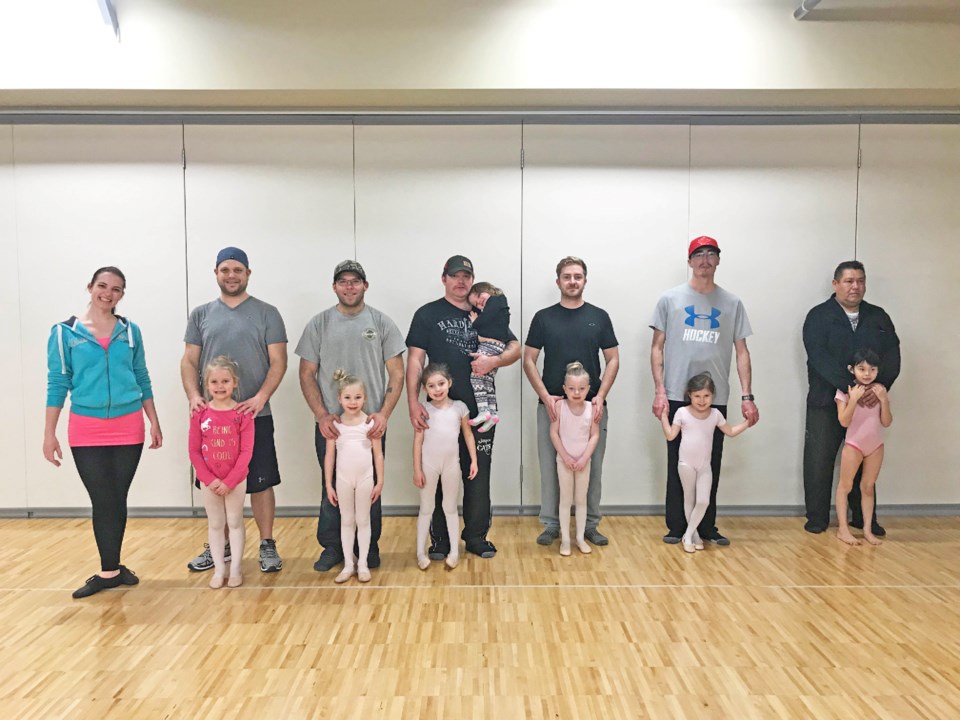 Instructor Lisa McKenzie from the County of Fife in Scotland was pleased to help out with the Northern Beat Dance Academy over the last few weeks. Here she&#8217;s with one of the Daddy Daughter Ballet classes created during her visit.

"The Daddy Daughter classes were more about having fun than performance, but hopefully the dads did leave with more respect for the athletic aspect of the genre," said Lisa McKenzie a ballet, tap and modern jazz instructor from the County of Fife in Scotland, who took over the special classes offered to NBDA members and their dads.

McKenzie, a friend of  NBDA's lead instructor, has a Bachelors Degree in Dance Performance, is a member of the Imperial Society of Teachers of Dance, and has a Masters Degree in Psychology — so she knows the body and mind of what she teaches.

"Many sportsmen attend ballet classes to increase strength and agility, so it's a shame that it's not started a trend in boys and men, because there are many benefits to ballet. Male dancers are extremely strong, but for some reason as soon as we say, "ballet," people think of little girls in pink tutus."

Nope. T-shirts, sweats and backwards baseball hats were the comfortable wardrobe pieces for the 'big guy' part of the dance couples during the week of workshops, leading to two final Daddy and Daughter Ballet classes at the end of the week.

"The classes were a hit," said McKenzie, explaining that 11 dad and daughter pairs took part in the classes which were split up between 5-6 year olds and eight and over. "The second class was non-stop laughter as the older kids thought their dads' dancing was hysterical."

Joking aside, the instructor gives credit to the big guys.

"All the dads did very well. I was impressed with how well they did," she said, but admitted with a laugh that the one-time event might have been as far as their ballet careers go. "Unfortunately, they weren't quite convinced to start adult ballet."

Aside from the dance aspect, the classes also helped on personal levels.

It's a great opportunity for parents to see what their children are learning in classes," said McKenzie "It's also a great class to spend some quality time together and it takes parents out of their comfort zone."

The dads and their young dance partners learned ballet techniques and dance imagery where they performed as soldiers and princesses or the characters in children's tales like Little Red Riding Hood.

McKenzie has stepped into a few classes during her month-long visit to the area. She says a change in instructors can give dance students a different and refreshing perspectives.

"Sometimes just having a different teacher say the same thing you've been saying over and over in a classes makes it stick," she said. "I hope each student has improved on at least one thing and can take that into their regular classes — but most of all, I hope they have had lots of fun."

The Scottish infusion and some new dance techniques can only help the dancers, says full-time NBDA instructor Shannon Subchuk.

"We try our best to bring in any guest artists whenever we have the opportunity to do so," she said, adding that the academy currently has 130 dance students in ballet, jazz, lyrical, hip hop, contemporary and Broadway styles.

Dancers range in age from three to adult.

When will McKenzie be back to see if more dads want to join the ballet?

"I am only here for one month, but Miss Shannon is my best friend, so I will definitely be back — and now that I know how awesome the students are here, I'd be more than happy to do more workshops when I next visit,"  McKenzie said.

The next chance to see the NBDA members on stage comes in 2019 with the annual recreation dance showcase scheduled for March 9 and the Year End Recital on April 6 and 7.