Emergency crews ready for mix of fire and ice responses

Transition season for Lakeland fire crews sees mix of fire and ice
Apr 28, 2021 2:32 PM By: Rob McKinley
Previous Next
1 / 1 April has already seen large southern Alberta grass fires. An Alpine Helicopter aerially assists firefighters on the ground as a wildfire burns near a residence off of Highway 1A, about one kilometre west of the The Wildcat Hills Gas Plant on Thursday (April 1). EVAN BUHLER RMO PHOTO
Expand
Previous Next

A brief but forceful dump of winter snow that blurred the horizon across Lac La Biche County on Tuesday morning — covered bike trails and playing fields that just a few days before were filled with residents enjoying double-digit temperatures and sunny skies — is a reminder to be wary of "fire and ice" at this time of year, says the regional fire chief.

"With the warmer weather arriving, we hope that the public will be diligent and remain cautious"

The transition period between winter weather and the warming spring temperatures can create dry grass hazards in one area, and ice-covered challenges in another, says John Kokotilo, the manager of Protective Services in Lac La Biche County. Municipal fire crews continue to maintain their ice-rescue equipment at the same time as their wildland fire tools. They also continue to issue cautions to the public during the changing seasons.

"Be diligent around all frozen water bodies," says Kokotilo. " As for wildfire preparedness, spring clean-up is a good time to help reduce the threat of wildfire that may affect your property. Remove or at least cut tall standing dry grass adjacent to your structures." 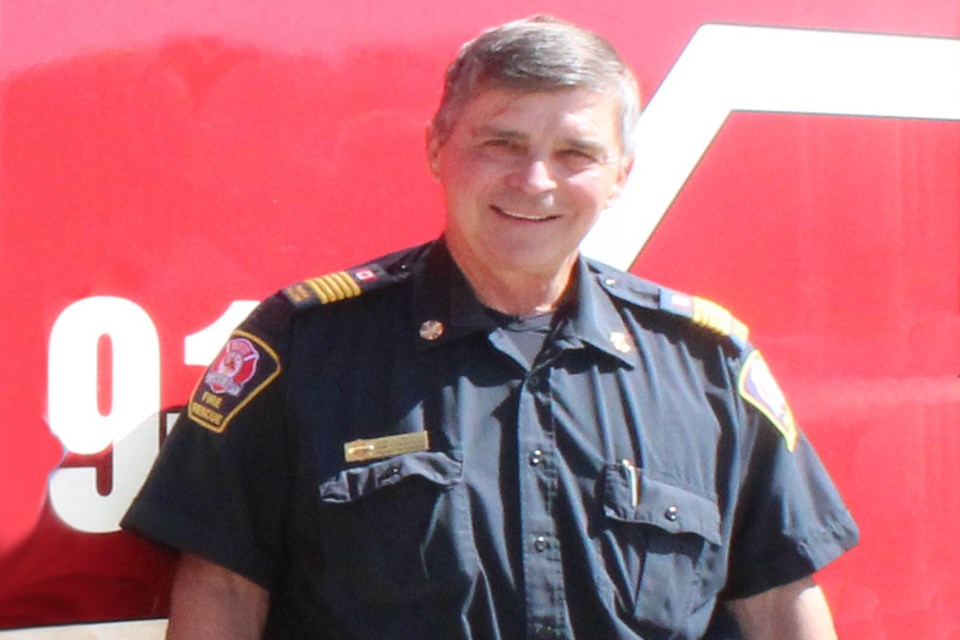 With threats from ice and fire overlapping, the fire chief is hoping residents and visitors pay extra caution to what Mother Nature has created.

"This year is a little out of the ordinary – our wet summer (last year) has left an excessive amount of tall standing dry grass – this is a concern," says the fire chief, adding that while a thin layer of ice still remains on many local water bodies, much of the area's snow cover has quickly melted. "At this time our snow-pack throughout the province has diminished very quickly, which has been evident of late with the wildfires that have occurred in the Southern part of the Province.  This trend  is evident mainly in the South but also extends northward and includes our area."

Although there have been no late season reports of incidents involving ice rescues, Kokotilo says in order to maintain that trend, residents must continue to use caution and common sense.

"With the warmer weather arriving, we hope that the public will be diligent and remain cautious," he said, sending a special reminder to pet owners in the wake of recent incidents reported in Edmonton, that included one man and one dog drowning after falling through ice on the North Saskatchewan River. "If you need to exercise your animal near a frozen water body ensure that they are on a leash."

With dry grasses posing risks for an early fire season in the Lakeland — the Lac La Biche Forest already has a provincial fire hazard of Moderate — Kokotilo said municipal officials are following the lead of Alberta Agriculture and Forestry when it comes to fire restrictions. So far, like provincial measures, municipal officials have restricted non-essential heavy fuel burning.

Heading towards the popular May long-weekend, Kokotilo was asked about the forecast for further fire restrictions. In past years, provincial fire bans have restricted all outdoor fires, including campfires, for the traditional starting weekend of the annual camping season. The fire chief couldn't give a prediction.

"We will follow Alberta Agriculture and Forestry's lead as we have in the past," he said.

For residents concerned about possible fire hazards, the municipality does offer a free-of-charge Fire Smart assessment at all properties.

"Our trained personnel will give you a detailed report providing information on areas of concern that the homeowner can mitigate to reduce the threat of wildfire," said the fire chief. "If the homeowner has wood refuse as a result,  the County will provide free wood-chipping and removal of the product."

Appointments for the Fire Smart appraisal can be made by calling the Lac La Biche County Protective Services department at 780-623-6774.

Efforts of firefighters limit damage to family home from wildfire off Highway 1A
Apr 9, 2021 4:00 PM

UPDATE: Residents evacuated from area near wildfire along Highway 1A
Apr 1, 2021 5:21 PM
Comments