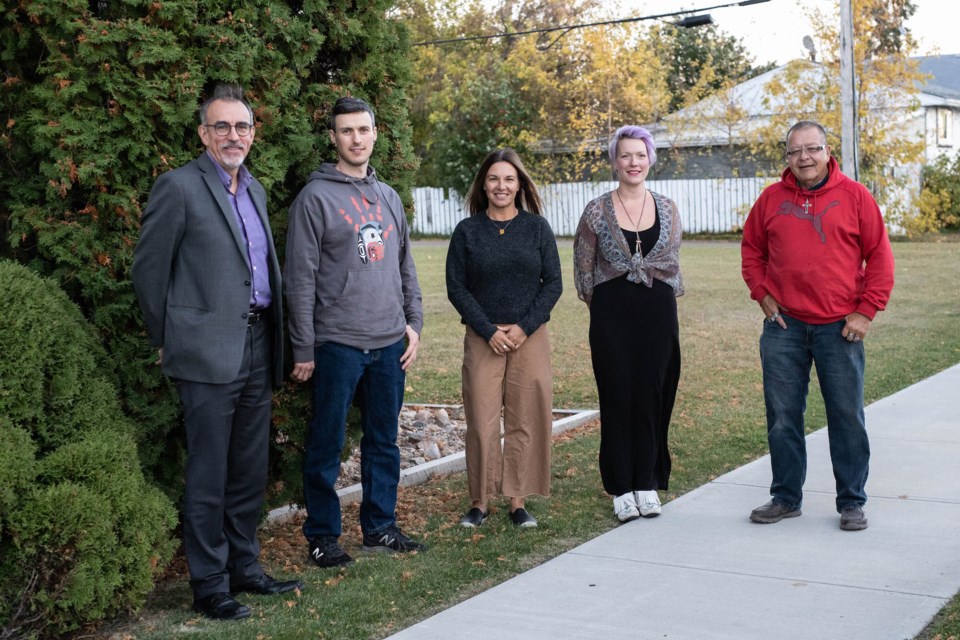 The recently released book, 'Restoring the History of St. Paul des Métis' was put together through by a team of authors, including: Pierre Lamoureux, Caleb Anacker, Tanya Fontaine, Megan Tucker, and Roy Missal. Not pictured is Goddy Nzonji. Janice Huser photo.

ST. PAUL - A book focused on sharing the unique stories of the Métis people from the St. Paul area is now available - but according to those involved with the project, it is just the first part of a larger project.

The book is called 'Restoring the History of St. Paul des Métis, Understanding Métis Perspectives' and is now available in hard copy and digitally. The book lists a number of authors - including Caleb Anacker, Tanya Fontaine, Megan Tucker, Pierre Lamoureux, Goddy Nzonji, and Roy Missal. But, as noted in the book's Author Note, there is an even longer list of people who were involved in creating the book.

The project was funded by the Alberta Culture & Tourism Anti-Racism Community Grant accessed in 2018. Anacker became involved in reconciliation efforts a few years ago, and following a couple years of doing reconciliation week events, the idea came up to apply for the grant in hope of taking on a different type of project. Anacker has been living in the St. Paul area for a number of years, and did much of the writing for the book.

The goal of the book is rather clear, "to improve relationships between indigenous and non-indigenous people in St. Paul." He acknowledges that there is often a "tension" around town. Sometimes, there are bigger "blow ups," but then things settle and people go about like nothing is going on.

Sometimes, it takes work to dig deep and find the positive relationships that exist, he says. Anacker believes there is a lot of unresolved anger on both sides, and misunderstanding of that anger also exists.

"There's a lot of work to be done," says Anacker.

Chapter one of the book offers bit of a disclaimer and explanation of how the project was approached. It reads: "Readers should know that we are not professional researchers nor historians. In collecting, analyzing, and explaining the research, an experienced social science researcher would have done things differently. Our first motivation was to have a better understanding - a better relationship with - the lived experiences of our local history and its continuing effects on racial tensions."

While the problems may seem hard to approach and solve, Anacker believes that the solutions just take time, and getting know people over and over again.

Lamoureux agrees, affirming the importance of the simple act of conversation - for the mere act of opening dialogue. Lamoureux took part in the project as a French-Canadian Catholic. He feels it's important to have the conversation about the disbanding of the Métis settlement, followed by the influx of settlers to the area. He adds it's important to "walk in the other person's shoes" and get people to remember there is another side to the story.

For Tucker, her involvement in the project was to "make sure we were hearing the voice of Métis descendents." Tucker facilitated sharing circles in Fishing Lake Métis Settlement, Elizabeth Métis Settlement, and St. Paul. She asked participants what their family experience was.

She noted that many people very much make the correlation between the displacement that was experienced, the feeling of not belonging, and negative things later on. But, there were also some positive stories shared, adds Tucker, who grew up in Fishing Lake herself. She notes that there was actually more displacement of the Métis people than she thought, with some families having to move "time and time again."

Fontaine was involved in the project on a few different levels, helping with some of the writing and administration tasks. She says her hope is that people come to know that Métis people contributed to the founding of the community. The Métis culture is "something to celebrate."

Her hope is that the community can come to understand how things happened, many years ago. She also believes one of the most important pieces of the project was that people got to share their stories, "and someone heard it."

A key piece to the completion of the book is the involvement of local Métis resident Roy Missal. He says that while many of his family members embraced their indigenous culture, he acknowledges that many Métis people did not feel comfortable sharing their culture.

"You didn't dare brag about your Métis culture," says Missal, when speaking about generations passed. But, "the Métis culture is embedded in us" and people should be proud of that, he says.

In the book, Missal states, "I have always had an underlying and deep-rooted desire to hear more about my Métis history, for what it really was and what it became. I have not always felt whole as a Métis person, but have become my own true person, who God has made me."

Tucker echos the notion that many people were afraid to admit they were Métis. She says she only found out about her family's background as an adult. Tucker says she always felt a connection to the culture, and for many years didn't know why.

When speaking further about the tensions that can exist between people, Missal acknowledges that when many of the settlers came to the area, they were unaware of what was happening, with the Métis settlement being disbanded. They were told the land was open to them, and there was a lack of communication.

Front-line hospital workers walk off the job
Oct 26, 2020 11:24 AM
Comments
We welcome your feedback and encourage you to share your thoughts. We ask that you be respectful of others and their points of view, refrain from personal attacks and stay on topic. To learn about our commenting policies and how we moderate, please read our Community Guidelines.