Lac La Biche County in the midst of a COVID outbreak

Lac La Biche has now topped the provincial rank of active cases of COVID-19 per capita
May 11, 2021 1:11 PM By: Jazmin Tremblay 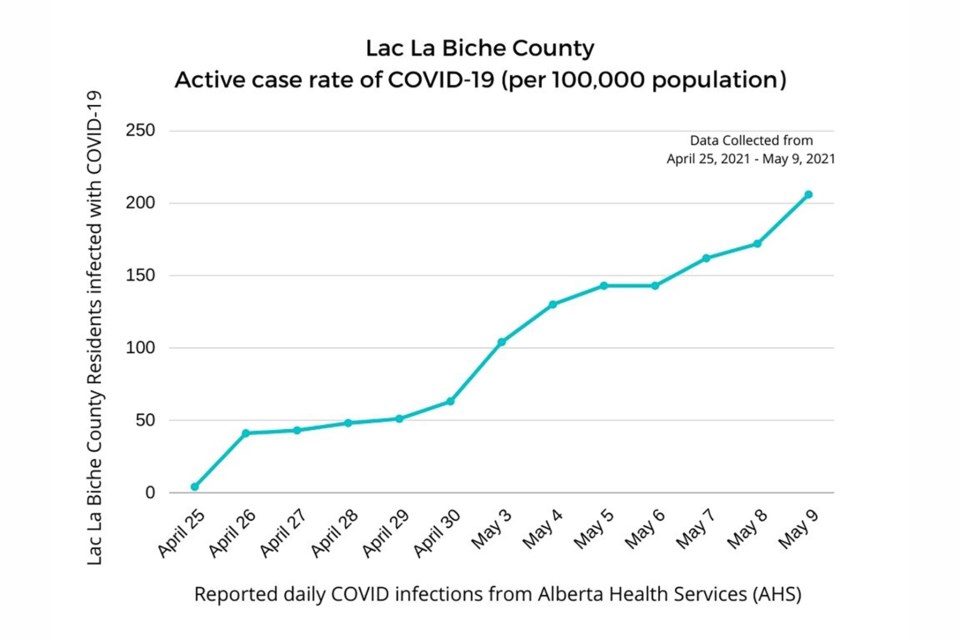 LAC LA BICHE - Lac La Biche County is leading the province in active cases per capita going into the weekend with a high-end tally of current cases showing 206 residents having tested positive.

“This is very concerning for the County,” said Lac La Biche Mayor Omer Moghrabi. “We will be looking at different alternatives really quickly. “

With unprecedented rates of COVID in the County, Moghrabi will now be consulting with other political leaders in the province.

In recent weeks, active cases reported by Alberta Health Services (AHS) have surged exponentially in the County. Since April 16, active cases in Lac La Biche and Plamondon and other rural areas in the municipality of 10,000 people have jumped from just four to more than 200.

Currently, just over two per cent of the population in Lac La Biche County — one in every 50 people — is infected with COVID-19.  The case rates are the highest in the province based on a 100,000 population base.

Not wanting to speculate on how the infection was able to spread so quickly through the community, Moghrabi said, “It’s water under the bridge at this point, now we just have to get the curve back down and get vaccines out.”

"The quickest way to get through this is... through isolation and vaccination,” he added.

Were Schools the warning bell

Even though schools have moved to online, AHS has continued to update school statuses.

Currently, École Plamondon has the highest cases of COVID-19 with more than 10 students and staff infected.

Ecole Beauséjour is the only school on alert, reporting under five cases to AHS.

Marjorie Charles, the president of Northern Lights local 15 of the Alberta Teachers Association (ATA) said, due to the rise of active cases in the county it had become difficult to find substitutes wanting to fill growing gaps caused by mandatory contact-tracing quarantine measures.

According to Charles, before the province transferred schools to home learning, teachers and support staff would go to work not knowing if that would be the day they would be sent home to isolate.

However, with students not set to return to classrooms until May 25 at the earliest, it is unclear whether this will be an ongoing issue.