'For me Remembrance Day is everyday,’ says Auschwitz survivor 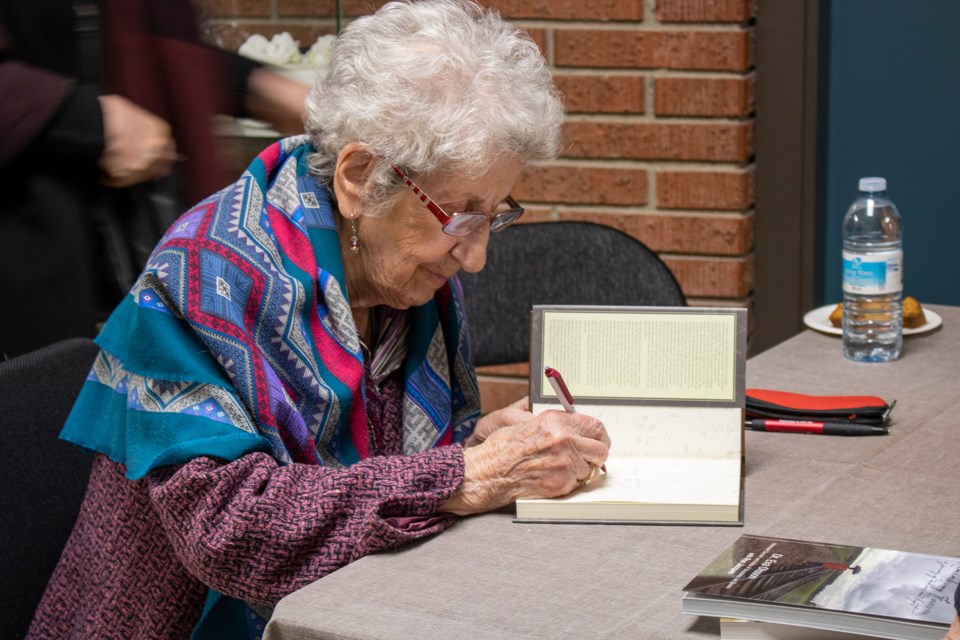 ST. PAUL - An acclaimed Canadian author and Holocaust survivor brought her horrific story of survival to about 300 people, who listened quietly, as she shared her story in riveting detail.

“For me, Remembrance Day is every day,” she told the audience gathered at Portage College on March 10.

Standing in front of the packed room, Dr. Eva Olsson, just 95 years young, showed a handful of grim grey slides in the auditorium at the college. Olsson is using her experiences in the Holocaust to speak about the power of hate and the need to stop it. She believes that several parents fail to speak about the Holocaust with their children since it’s a hard subject to bring up, however she thinks it’s essential for their future.

“Hate is a sickness and it’s important for children to know what hate is and still does,” she said.

The author and public speaker, based in Muskoka, Ont., spoke about surviving Nazi death camps as a slave labourer. Olsson lost most of her family during the Holocaust and referred it to tell the packed room about the danger of intolerance, bullying and the inaction of bystanders. It’s a talk she has given for years, beginning in 1996.

Olsson is the author of Unlocking the Doors: A Woman’s Struggle Against Intolerance and Remembering Forever: A Journey of Darkness and Light, and Every Step of the Way.

She was 19 when she and her family – including her parents and five siblings – were steered into cattle cars to be taken to Auschwitz from Hungary, in 1944. She and her younger sister would be the only two members of her family to survive.

Since 1996, Olsson has advocated against bullying, speaking mostly at schools to ensure bullying, racial slurs and choosing to be a bystander and doing nothing should not be tolerated.

Joan Brodziak is a retired teacher who heard Olsson speak six years ago.

“From then it was just an interest in the war,” she told the Journal after the event.

On Tuesday, she attended the talk with her husband, Ken.

“It’s a powerful message about tolerance, with Canada being a multicultural country, we need to tolerate everybody,” Ken said. “And as she said, ‘We bleed the same.’”

It’s a story everybody should hear because it’s a part of history, noted Sarah Looy, another audience member.

“We don’t need to hate people, we need to love people and be kind,” she added.