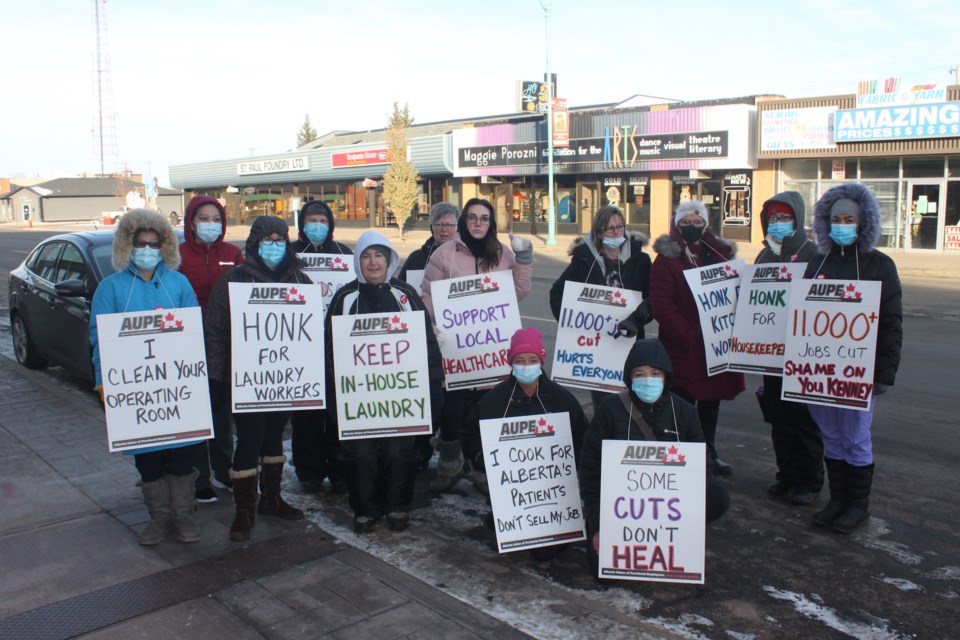 Hospital workers in St. Paul joined with others across the province last October in a public information picket to protest proposed job cuts. File photo
LAKELAND - Alberta Health Services is moving ahead with privatizing laundry services at its facilities across the province effectively removing 428 jobs from its payroll. In the Lakeland region, the job loss count at community health centres adds up this way: St. Paul -10, Two Hills - five, Cold Lake – eight, Elk Point – three and Lac La Biche – seven, according to numbers received from the Alberta Union of Provincial Employees (AUPE).

AHS has awarded the province-wide laundry contract to K-Bro Linen Systems claiming 68 per cent of laundry services is already provided by private companies and fully contracting out the service will “generate significant ongoing operating savings over the life of the contract.” AHS also cited an estimated $100 million in capital savings that would otherwise have been a needed investment to rebuild a replacement laundry system if AHS kept the service in-house.

“The hundreds of millions of dollars in cost avoidance and savings will be reinvested into top health care priorities including reducing wait times and improving mental health services,” said Tyler Shandro, Minister of Health in a statement announcing the move. “The former government’s opposition to contracting with a company to wash laundry would have cost taxpayers over $100 million. Fortunately, that will not happen under this government.”

However, AUPE regional vice-president Mike Dempsey isn’t buying the minister’s cost-saving argument, describing it instead as the “edge of the wedge” as the government moves ahead to privatize health care services in the province.

“What the heck is with this timing? Here we are in COVID - I suspect this government wants to minimize the amount of kickback in public demonstrations or pickets, or whatever. So, what do you do? You do it in the middle of COVID, during the height of the third wave. I wouldn’t be surprised if that’s why they pulled it right now.”

“They want to privatize health care and this is the beginning of it. You privatize the services such as laundry. We understand they are now looking at food services in hospitals. So, that is the next thing they want to put their attention on and security, they are starting to privatize security in hospitals. They are piece by piece by piece dismantling public health care. This is how it starts.”

While some Albertans might consider the number of jobs impacted in this latest move as insignificant, he said it must be put in context and considered as just part of the province’s larger announcement last fall to privatize laboratory, linen, cleaning and in-patient food services, among others, which potentially could impact upwards of 11,000 jobs.

“These jobs aren’t just being privatized, for the most part they are being moved out of rural areas. K-Bro will take these jobs and probably move them to centralize them in Edmonton or Calgary, or wherever they decide they are going to be,” he said, which impacts rural communities.

In October of 2020, front-line hospital workers walked off the job across the province in a one-day show of solidarity opposing the chaos they claimed the UCP government was bringing to a health care system already battling through the COVID-19 pandemic.

“When you privatize will there be any savings? It’s quite unlikely there will be. We’ve yet to see if there’s any savings but the costs usually go up because now you have a profit motive and higher paid management staff than there is in government looking after these contracts. It’s not a wise decision for the province and it is certainly going to be devastating for the employees that are going to lose their jobs,” Dempsey said.

“These Albertans are mostly women, mostly rural, and mostly people of colour,” David Shepherd, NDP Critic for Health, noted in a statement on the issue. “They have been changing and cleaning bed linens through the most difficult and dangerous time in Alberta’s history, and this is the thanks they get from Kenney and the UCP. They will either be left unemployed or forced to reapply to do the same job for less money for a private company.”

Shepherd claimed the government is pulling money out of family budgets and rural communities at the worst possible time.

Meanwhile, AHS has said it is committed to working with affected staff through the transition process and “anticipates there will be some opportunities for employment with the new vendor.”