LAC LA BICHE - A somber remembrance was held on Wednesday at the Lac La Biche Mission Historical Site to honour the lives of 215 children whose remains were found in unmarked graves at the site of a former residential school in Kamloops, BC.

The Mission, now a provincial and national. historic site just 10 kilometres from the Lac La Biche hamlet, was at one time the location of an Indian Residential School. Run by the Catholic Church and the federal government, the Mission's residential school, known then as Notre Dame des Victoires, operated for five years in the late 1800s. 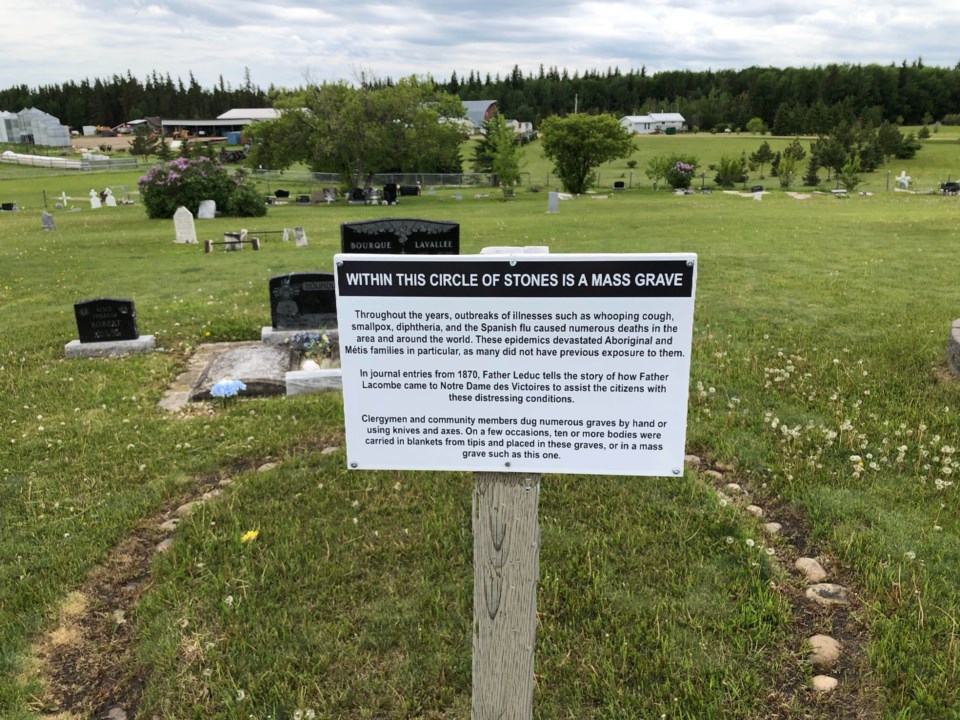 A sign in the Mission Cemetery acknowledges the mass grave site at the location.   - Lac La Biche POST

The schools had a federally-endorsed mandate of assimilating the Indigenous students into Christian beliefs, removing their language and culture while educating them.

The Métis Nation of Alberta organized Wednesday's event that featured guest speakers, traditional prayers and a commemorative lunch. A 215-seconds of silence tribute was also held.

Métis Nation of Alberta Region 1 President Jim Cardinal said he had dreams about where to hold the event, and in each of four dreams, he saw a chair at the Lac La Biche Mission site.

The afternoon event drew about 200 people. Organizers hope the ceremony will help to bring continued awareness and support towards the residential school system's victims and survivors.

The findings at the former Kamloops school have lead to a call for all former school sites to be explored for similar grave sites.

The Mission Cemetery located adjacent to the site does have a marker identifying a mass burial site. The marker says it was used during instances of fatal outbreaks of influenza and tuberculosis. The burial site — about 20 feet in diameter, is circled with rocks.

Indigenous officials say federal, provincial and local governments need to reconcile the dark history of the residential school system. The region's provincial MLA as well as the members of the municipal elected council were also guests at the event, and pledged their support.