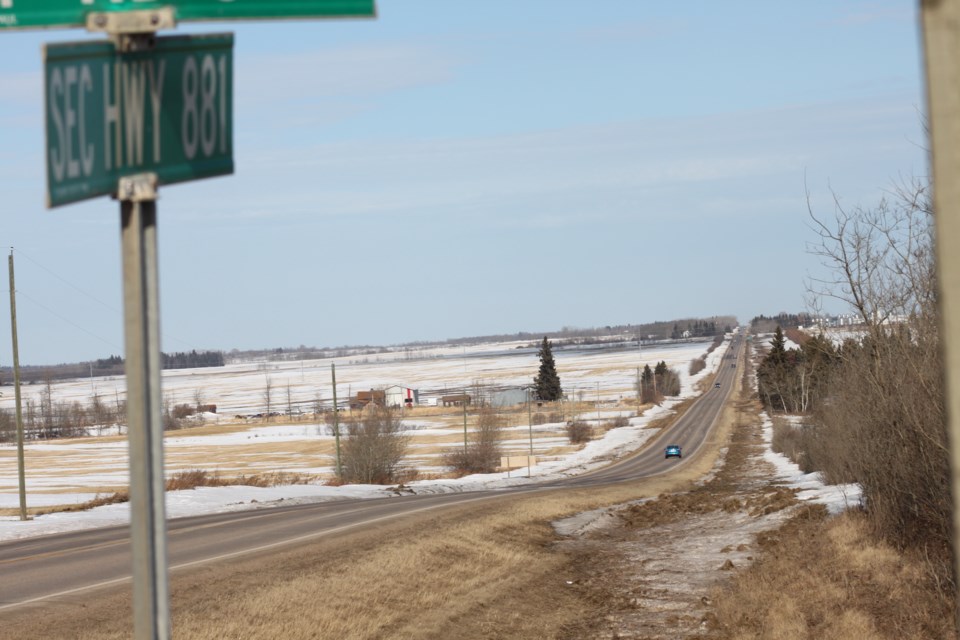 Sec. Hwy. 881 failed to make it onto the provincial government’s construction program again this year despite ongoing concerns over its state of disrepair between Hwy. 28 and St. Paul.
ST. PAUL - The section of Sec. Hwy. 881 between St. Paul and Hwy. 28 continues to get a failing grade from those who travel it on a regular basis. Once again it has also failed to make it on to the 2021 provincial construction program.

The stretch of highway has long been a bone of contention for many locals who travel it on a regular basis whether in passenger vehicles, school buses or transport trucks.

In 2018, MLA Dave Hanson shared a video of a bumpy school bus trip he took down the provincial highway in hopes of getting some government attention to the roadway. At the time, he expressed disappointment the highway was again not on the New Democrat’s construction list that year.

Three years later and he finds himself in the same spot and says he continues to get a rough ride from constituents who want to see it rebuilt. He agrees the roadwork needed to bring 881 up to snuff will be more than just a paving project.

“If I had my druthers it would be on the slate for this year but it’s not, unfortunately. I continue to push forward with Minister (Ric) McIver.”

At this time of year “with the frost heaving it just gets really nasty,” Hanson said, adding he’s heard the concerns about the toll it takes not only on drivers but also on the vehicles that travel it regularly.

“I know people are using the side roads to avoid it completely.”

However, Hanson said it is important people recognize that Alberta is a huge province with thousands of kilometres of highway that are in need of repair.

“I almost challenge some of these folks to go drive some of these other ones and see for themselves, that get a lot more traffic than we do. You are going to have to be patient. I’ve got it on the list and pushing for it every year.”

St. Paul Municipal Seed Cleaning Plant manager Ron Wirsta hears about the state of 881 on a regular basis from his customers and the truckers that are running heavy loads along the route.

“There’s trucks falling apart on this road. It is so hard on the big trucks coming into our facility,” he said, describing it as "absolutely horrible,” and suggesting it also poses a safety hazard.

“The roughness of that road is definitely going to cause a major accident one of these days.”

Wirsta would like to see the road widened and resurfaced.

“A lot of guys are using as many backroads as they can to get to me because of that highway.”

County of St. Paul Public Works Director Daniel Reid said he believes the last work done on 881 was paving in 1997. The fact that drivers are taking to the County backroads to avoid driving 881, is something he is well aware of.

“There is a substantial increase in traffic onto County roads in order to avoid Highway 881. For example, the County is banning a gravel road (RR94 south of HW 28) to 75 per cent in order to discourage this type of detouring onto our roadways. Heavy haul traffic is willing to take gravel and dust over a paved surface,” he noted in an email to Lakeland This Week.

“There is also a substantial increase in traffic down RR 95 into the Town of St. Paul limits due to highway 881’s current state. The County recently upgraded the correction line TWP 590 and that combined with the smooth state of RR 95 makes it inviting for traffic to come off Highway 36 or HW 881 shoot across to 95 and straight south into town without rattling their teeth out.”

St. Paul and District Chamber of Commerce president Brent Sandmeyer travels the route weekdays to work in St. Paul and is well aware of the bumps along the way. Asked if he felt the disrepair of 881 into St. Paul is a concern for the business community, Sandmeyer said he believes it is.

“I drive 881 south from Hwy. 29 and I know how rough it is, it’s terrible. I don’t know if there’s been any empirical studies that could tell you that it’s negatively effecting businesses, but I can tell you anecdotally people have told me they avoid that highway,” Sandmeyer said. “So, if they are avoiding that highway, it probably means unfortunately they may be avoiding St. Paul.”