“We live in a multicultural country and I think it’s important that we embrace and learn about each other's cultures,” Ang said.
0
Jan 2, 2020 2:00 PM By: Rushanthi Kesunathan 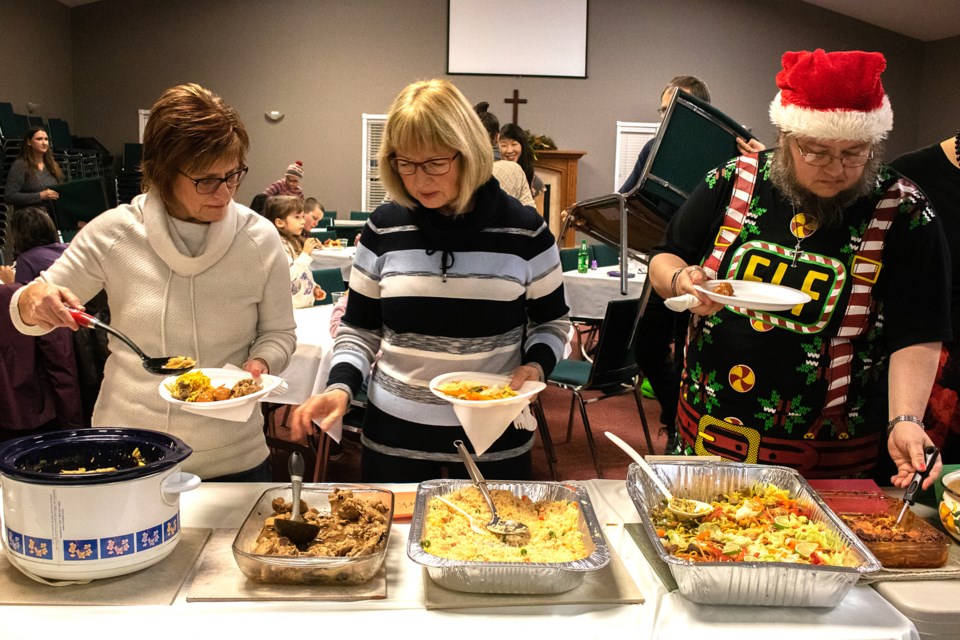 Christine Warkentin, Lucille Penz, and Daniel Burger enjoy a potluck dinner held at the Bethel Family Worship Centre on Dec. 22. The event was meant as a way to celebrate multiculturalism in St. Paul. Rushanthi Kesunathan photo

ST. PAUL - Ben Ang is one of many immigrant residents living in St. Paul. In an effort to bring together different backgrounds, Ang came up with the idea of organizing a multicultural community Christmas potluck, so people could come to celebrate the holiday and meet new friends.

The potluck, which took place at the Bethel Family Worship Centre on Dec. 22, saw about 30 people come together and share traditional food.

“We live in a multicultural country and I think it’s important that we embrace and learn about each other's cultures,” Ang said.

Ang, who moved to St. Paul in 2007 from the Philippines, says he wants to be more connected to the community. He posted his idea for a multicultural Christmas potluck in a Facebook group, which caught the attention of the Bethel centre, who offered space for the event, and Lynda Young, a dance and theatre teacher at the St. Paul and District Arts Foundation.

“This is great because it helps build a community and people will start knowing each other and different cultures,” Ang said. “And St. Paul is home to many people from different countries.”

Young, who helped Ang bring the event to life, said she was happy to see the turnout, and looks forward to getting to know more people, connect and build a support system for St. Paul’s newcomers.

“I’ve seen a growth in people coming to town from different parts of the world and the country, and a circle could provide support and I just hope to see that happen,” Young said.

The event saw locals from countries such as India, Bangladesh, and Guyana bring in their cultural dishes.

Anyone interested in volunteering for future events or provide suggestions on what they want to see organized is asked to connect with Young through the St. Paul Multicultural Circle Facebook page.

Humble but optimistic beginnings for seniors connection group
Jan 29, 2020 9:40 AM

Cold Lake RCMP seeking assistance locating missing woman
Jan 28, 2020 5:06 PM
Comments
We welcome your feedback and encourage you to share your thoughts on this story. We ask that you be respectful of others and their points of view, refrain from personal attacks and stay on topic. To learn about our commenting policies and how we moderate, please read our Community Guidelines.