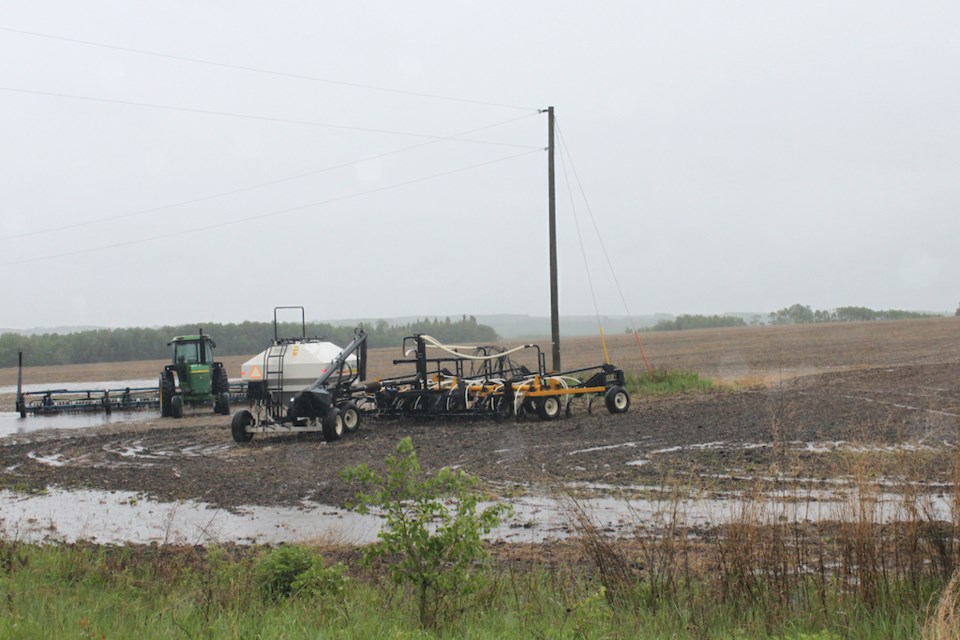 TOO MUCH OF A GOOD THING - Field work in the region ground to a halt last week as heavy rain moved into the region. Before the weekend, some areas had already recorded upwards of three and a half inches of rainfall but with the heavy rain continuing through Saturday and Sunday, low-lying area were filling up and the rain was quickly becoming too much of a good thing. Clare Gauvreau photo

ST. PAUL - Up until the rain clouds rolled into the northeast area last week, farmers were making the most of May’s clear skies to get spring seeding taken care of. By the first week of June, it was estimated about 94 per cent of this year’s crop was seeded in the region, slightly behind last year at this time when seeding was for the most part wrapped up.

County of St. Paul agricultural fieldman Keith Kornelsen said decent weather in May allowed for the combining of crops still on the ground from last fall’s dismal harvest season and then farmers move right on into seeding.

“From what I’ve heard and seen, I would say it’s mostly done. There is some seeding still to do but I think the pressure is somewhat off for the most part,” he said last Thursday.

Moisture levels have increased significantly with heavy rainfall experienced throughout the area with pastures and hay fields benefiting. In fact, across the province surface soil moisture conditions are rated for the most part as being good to excellent.

“It was getting very dry,” Kornelsen said. “Several counties had issued fire bans. We had actually stopped giving out permits for a while.”

Last week’s Alberta Crop Report indicated some parts of the northeast had received upwards of three and half inches of rain. Warm weather is now needed to permit what seeding remains to be completed and to get the crops growing.

Kornelsen said the county is continuing its clubroot monitoring program this year and said the good news is that tests on clubroot samples taken from 10 fields where it was detected in the county last year, have come back negative for any signs of mutation. New clubroot pathotypes with the potential to overcome disease-resistant canola have been dedicated in areas across Alberta in the last five years, which is causing some concern.

“We still have the old strains of clubroot here so in a way whatever we are doing seems to be working for that. There’s no mutating of the spores right now. The bad thing is they found it in Two Hills – so that is all we are really trying to do is stop that from coming into the county. The fact that it is in the surrounding counties is a bit concerning.”

For the past three years, every field in the county with canola has been checked by county staff for clubroot.

“When we find a suspect field then we will test it and then if it is positive we enforce the amount of years that they can’t grow canola on this field. Last year was the first year we sent samples away to see what kind of clubroot it was.

Kornelsen estimated about 600 canola fields are checked annually in the county. While it has been a big undertaking and ties up a couple of summer students for a good month at least each year, it has been worthwhile.

“It’s given us some pretty interesting information.”

As for priorities for his department over the next couple of months, Kornelsen said he fully expects beavers to cause a few headaches.

“I think some of our bigger issues will be water issues with the increased moisture there’s increased beaver activity. They are moving into areas that they’ve never been in before and creating issues for producers and us too with our roadways they are plugging up culverts maybe where we haven’t had issues before. Some of these sloughs and small lakes, water is at record levels and people are worried.”

Once things dry up, residents can expect to see the county crew out spraying for tree and weed control purposes in roadside ditches. He said they county works off a four-year plan where problem areas are sprayed every four years.

He said the staff doing the work are licensed by Alberta Environment and the county uses registered herbicides approved for use in Canada.

“Typically, we are looking for problem areas where the weeds or the brush is coming up on the road.”

Property owners who prefer ditches alongside their property not be sprayed can enter into an agreement whereby they take care of the weed and brush control themselves.

With cuts at the provincial level to highway maintenance, Kornelsen said nowadays the weed and brush control in provincially-maintained ditches involves little more than an annual top cut and it has started to show in some areas where trees and weeds are becoming an issue.

The concern with weed growth in ditches maintained by province is that it can spread into neighbouring areas that fall under county jurisdiction, which then becomes a county problem, Kornelsen explained. Since it’s “typically frowned upon” to give a weed notice to the province, he said he does what he can to work with the local highway maintenance staff to address the areas of concern.