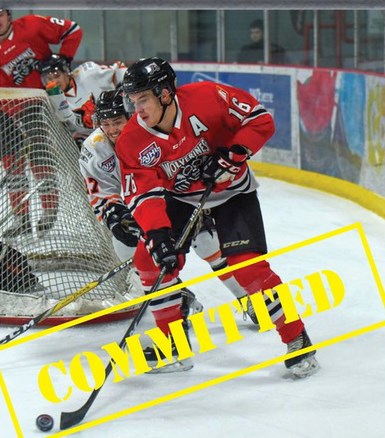 St. Paul's Brayden Labant has committed to playing with the NAIT Ooks for the 2020/21 hockey season. Photo supplied.

ST. PAUL - Brayden Labant will continue to play hockey while he pursues a post-secondary education at the Northern Alberta Institute of Technology (NAIT).

Last week, the NAIT Ooks men's hockey team announced that Labant, who is from St. Paul, has committed to the program for the 2020/21 season.

The 6'1, 195 lbs., right-shot forward was an assistant captain for the Whitecourt Wolverines of the Alberta Junior Hockey League (AJHL) this past season. He played a total of 238 games in the AJHL.

"We watched Brayden a lot this year and we liked his game more and more as the season progressed," said Tim Fragle, head coach of men's hockey at NAIT. "He has a good mixture of size and skill and produced for his team in important games down the stretch and in the playoffs."

"Most importantly, Brayden has strong character and comes from a good family, these traits always result in success in the classroom and on the ice as we put a big emphasis on recruiting character to continue our program's strong culture."

"Hockey has been part of my life for a long time, so when given the opportunity to continue playing while also getting an education, it was an easy decision," said Labant.

When speaking of the past season, Labant said his third season in Whitecourt went quite well.

"We had a great team and it would've been exciting to play out my last year and see how far we could make it in playoffs, knowing we had a chance to make a run for it. But, unfortunately it was cut short due to everything that's going on."