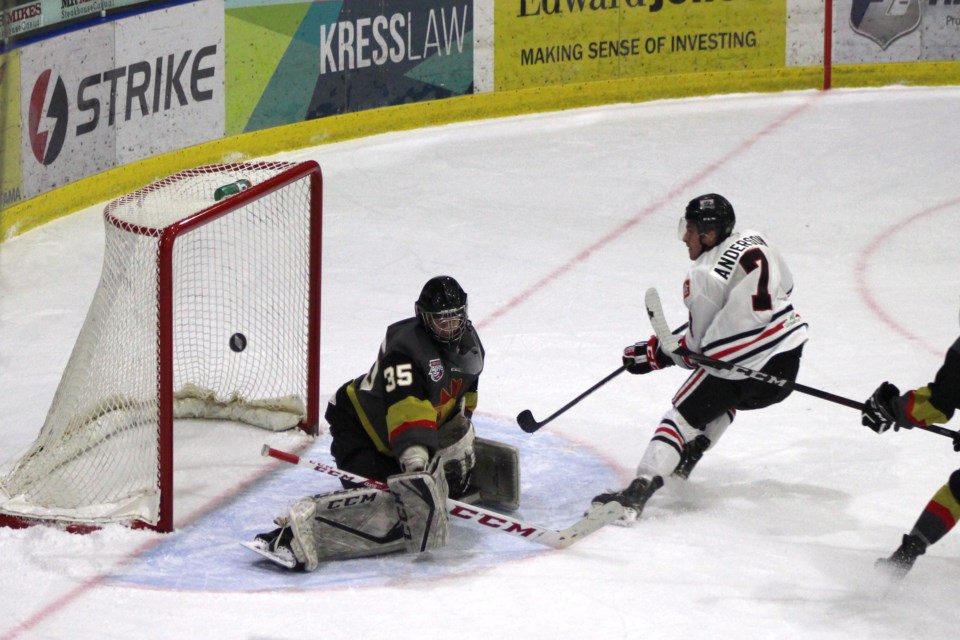 The Bonnyville Jr. A Pontiacs are benched after the league announced their season is paused for the time being. File photo.

BONNYVILLE – The Bonnyville Jr. A Pontiacs season is frozen due to provincial restrictions.

The Alberta Junior Hockey League (AJHL) announced on Nov. 24 that the regular season, which just started earlier in the month, is "on pause until existing limitations are lifted and we’re permitted to safely return."

“In a sense, there was a bit of an expectation based upon that number of cases that had been going on in Alberta,” he explained. “We were hoping, especially in the north division and with our organization, our guys have been doing exceptionally well making sure that we follow a very strong plan and we're doing what we’re supposed to be doing. We’ve minimized any risks from our organization and our players have been committed but we also understand that the province had to ensure that the safety was addressed.”

The regular season for the Pontiacs started with back-to-back games against the Grande Prairie Storm, where they had a win and a loss. The Whitecourt Wolverines were Bonnyville’s opponents for their first home series, which also ended with one in the Pontiacs’ favour and the other for the Wolverines.

What would have been the remaining games before the holiday break were cancelled as a result of the provincial protocols.

After having a meeting with players and staff, Swan said most of the Pontiacs have headed home since Bonnyville falls under the enhanced zone for the measures.

“Except for a few that are in different travel scenarios, like our American players,” he explained. “A few of the other ones don’t have the ability to train or stay connected physically for when the pause is finished in December. We talked about getting together weekly with some phone calls so we could stay connected as a group.”

The coaching staff will put a focus on staying connected with the team along with recruiting while they wait to hear what the league’s next move is.

“We’re going to really focus on our season prep for when we can get started up again and we’re going to focus on the marketing side with respect to our hockey team. There’s lots of things that we’ve set goals for and we’re excited and enthused about making sure that we do things at this time of the year that we normally couldn’t do. We’re going to make the best situation out of the scenario that everyone in the world has to deal with.”

The AJHL board of governors will reconvene on Dec. 19 to determine a timeline and updated protocols for return to play.