Bonnyville Pontiacs show a glimpse of what they can do

The Bonnyville Jr. A Pontiacs lost back-to-back games over the weekend to the Sherwood Park Crusaders
Mar 22, 2021 3:30 PM By: Robynne Henry 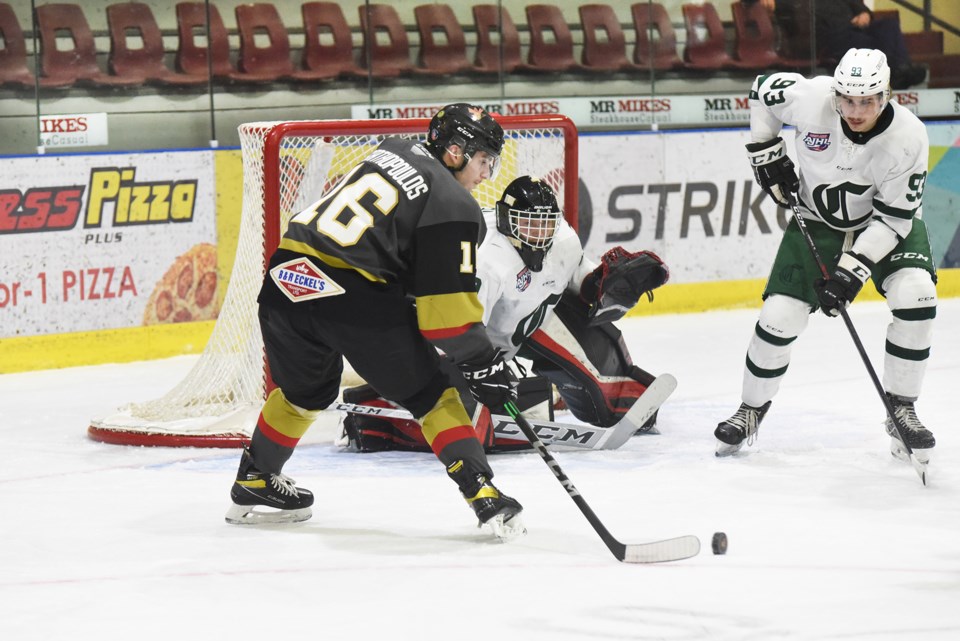 Bonnyville Pontiac Justin Stathopoulos tees up a shot against the Sherwood Park Crusaders during their Saturday, March 20 game. Photo by Game Ready Photography.

BONNYVILLE – Although the Bonnyville Jr. A Pontiacs didn’t have a successful weekend against the Sherwood Park Crusaders, assistant coach TJ Millar saw promising aspects from the team.

When the teams faced off on the weekend, the Crusaders came out on top in both games.

The Pontiacs fell to the Crusaders 5-3 in their barn on Friday, March 19.

Pontiac Justin Stathopoulos put Bonnyville on the scoreboard just over three minutes into the second period, but Sherwood Park answered with one of their own to bring the score to 4-1.

With Sherwood Park down a player due to a roughing penalty, Stathopolous got his second goal of the night during a power play.

According to Millar, this was Bonnyville’s first power play goal of the season.

“We got it because we were simplifying our playing and we were focusing on shooting the puck,” he continued. “We’ve been running into some situations lately where we’re passing as opposed to shooting and we’re just trying to tell our guys that we need to dumb it down a bit and take our opportunities to create changes when they’re coming.”

Pontiac Matthew Gerke kicked off the third with a goal to bring the score to 4-3, but that would be Bonnyville’s last point of the night.

Millar believes the team was "playing on their toes versus playing on your heels" during this period.

“We started to wear them down and (be) extremely physical... so they’re starting to create some mistakes and you see some guys, like Gerke awarded with a goal because he’s just, quite simply, working hard, and getting pucks to the net.”

Sherwood park added one more point to their lead to end the night 5-3 in their favour.

A standout for Millar during this game was goalie Bradley Mistol, who came in to relieve Hennessey in the third.

“He got his first glimpse of Alberta Junior Hockey League (AJHL) action,” he said about the St. Paul native. “It was great to see him go in there and do his job. He came in as relief and did exactly what was expected of him.”

It looked like Bonnyville might be able to finish the weekend on a high note when the Crusaders came to town on March 20.

The Pontiacs fought hard, but just missed the win by one when the Crusaders skated away with the 4-3 victory.

The home team came out of the locker room hot with Pontiac Chayce Schmidt finding the back of the Crusaders net less than a minute into the first.

Another point for Bonnyville came from Austin Saint, giving them a 2-0 lead.

Before the period was through, The Crusaders tied it up with back-to-back goals.

The Pontiacs were back in the lead in the second, with Mason Mantzavrakos getting the only point of the frame.

The final 20 minutes went to the Crusaders, where they got the last two goals of the evening for the 4-3 win.

Millar stressed the Pontiacs need to show consistently both in the defensive and offensive zones.

“We need to make sure that we need to help our defencemen out. You look at their two goals (in the first period), the second goal was simply because we didn’t commit to back checking and defence hard enough. There should never be a situation where they gain entry into our zone and drop the puck to their support option. We should make sure we have guys on them all the time.”

The Pontiacs look for redemption on Friday, March 26 and Saturday, March 27 against the Crusaders. Puck drop both nights is 7 p.m.