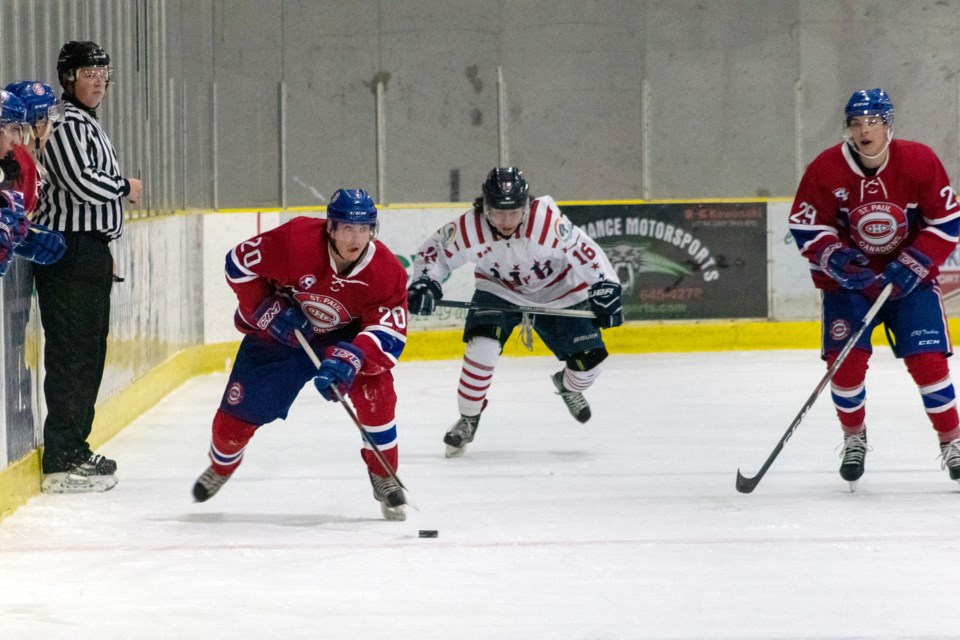 The Canadiens’ Dylan Lindal (#20) carries the puck up the ice during a Dec. 18 game against Lac La Biche.

The Jr. B St. Paul Canadiens played a hard game of the country’s national sport on Dec. 18, with players netting goals back-to-back while another skated out with help after taking a hit to the face.

The Canadiens played against the Lac La Biche Clippers, losing 8-5 at the Clancy Richard Arena.

During the first half of the first period, the boys played a tight game answering each of the Clippers' goals with their own. But eventually, the Clippers led by a score of 4-2.

The Clippers are sitting second in the league with the Wainwright Bisons in first. The Canadiens are in third place.

“We did not defend anywhere close enough to compete with them on Wednesday. We've given up way too much lately,” head coach Shawn Germain said. “(There were) too many hope plays on the defensive side and that's never a formula for success.”

Lane Wycotte netted a goal for the team during the first period in a power play with assists from Shane Witney and Jason Pashniak. The Clippers answered with two goals. The Canadiens' Orrie Wood tied the game with a goal, and assist from Brendan Levasseur, but again the Clippers’ Brody Rosychuk answered with two more goals.

Rosychuk netted four of the teams' goals that night.

Wood kept pushing, and scored another goal later on, unassisted. Brody Green netted two for the home team in period three with assists from Brayden Goulet, Zandro Luck-Palliotto and Wycotte.

The night also saw Nathan Degraves escorted off the ice after what looked like he took a hit to the mouth. Germain says Degraves is a little nicked up but will be fine. One of the Clippers' goals - which was made seconds after Degraves' hit - was disallowed. Though not certain, Germain believes the referee deemed that there was a check to the head before the goal went in.

The Canadiens attempted 38 shots throughout the game, while the Clippers tried for 40 shots.

The Canadiens play on Dec. 20 against the Cold Lake Ice. The team will play its first game into the New Year away on Jan. 3 against the Vegreville Rangers.

Ladies and men take to the ice for bonspiel
Jan 24, 2020 1:45 PM
Comments
We welcome your feedback and encourage you to share your thoughts on this story. We ask that you be respectful of others and their points of view, refrain from personal attacks and stay on topic. To learn about our commenting policies and how we moderate, please read our Community Guidelines.