The Bonnyville Jr. A Pontiacs only played one game over the weekend after a Sherwood Park Crusader player received a false positive test result
Mar 30, 2021 2:00 PM By: Robynne Henry 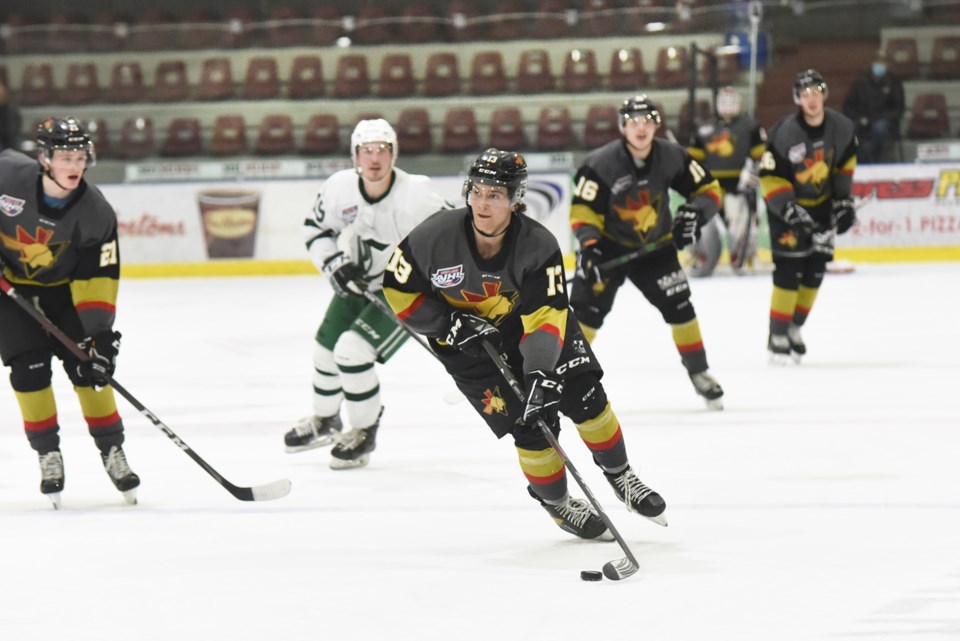 Bonnyville Pontiacs Chayce Schmidt heads up the ice to the Sherwood Park Crusaders zone during a March 28 game. Photo by Game Ready Photography.

BONNYVILLE – The Bonnyville Jr. A Pontiacs didn’t have the weekend they were expecting.

Instead of facing off against the Sherwood Park Crusaders for back-to-back action on Friday and Saturday, one of the games was postponed due to a member of the Crusaders receiving a false positive COVID-19 test. It will be rescheduled to a later date.

The Alberta Junior Hockey League (AJHL) announced the change in schedule on March 27 to "allow for the analysis of a COVID-19 test and to ensure the safety of the cohort."

According to Pontiacs head coach and general manager Rick Swan, a Sherwood Park Crusader had no symptoms before receiving one positive test result on Wednesday followed by two negatives on Thursday and Friday.

Swan stated the one game will be made up in Sherwood Park on Tuesday, April 6.

The other match-up was rescheduled to Sunday, March 28, where the Pontiacs fell 4-1 to Sherwood Park.

It was the Crusaders who got on the score sheet first in the first frame, taking and keeping the 1-0 lead until the clock ran out.

Swan said the Pontiacs' first part of the game was ‘our best start in the five games we’ve played so far,’ however, they lost their momentum as a result of penalties received by Pontiacs Mason Mantzavrakos for cross-checking and Austin Saint for high-sticking early on.

“I think that served Sherwood Park well because it gave them time to regroup a little bit, get off their heels, and allowed them to come into their game,” he noted.

While the Crusaders added another point to their lead in the second, Pontiac Alex Power added his name to the score sheet with less than five minutes left on the clock. It was, unfortunately, Bonnyville’s sole point of the evening.

The final period went to the Crusaders with a power play and empty-net goal that solidified their 4-1 win.

“I liked our effort, but it was inconsistent at times and I thought that certain players that took those penalties created a little bit of our momentum loss and that’s something that we’ve got to address as a coaching staff this week going into next week’s games,” stated Swan.

The next games in the series are scheduled for Friday, April 2 in Sherwood Park and Saturday, April 3 in Bonnyville. Puck drop both evenings is 7 p.m.