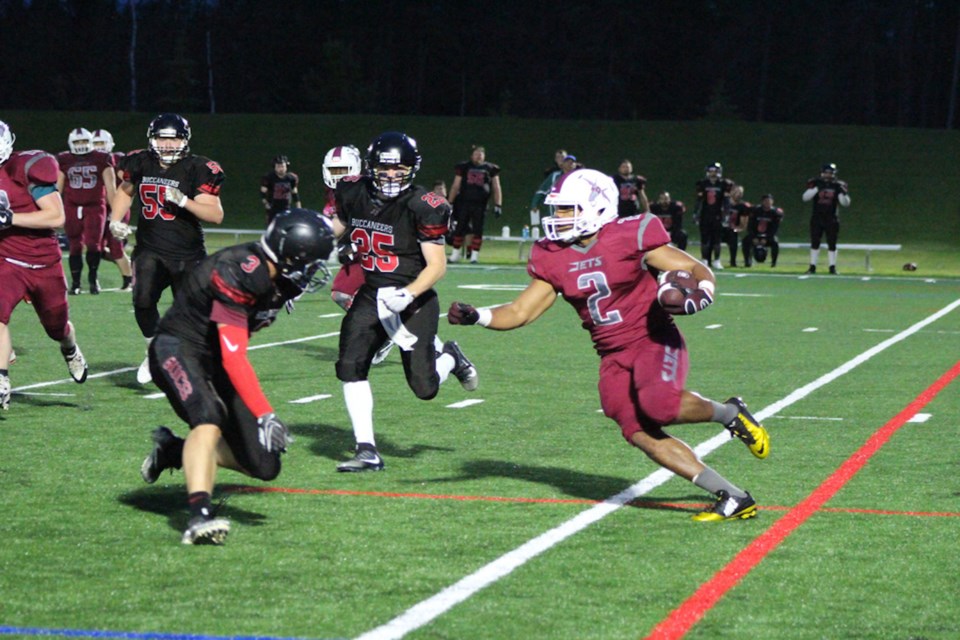 The Cold Lake Fighter Jets are preparing for a 'short and sweet' 2021 season. File photo

COLD LAKE – The Cold Lake Fighter Jets are lining up to kick-off the upcoming season.

The Alberta Football League (AFL) officially gave the go-ahead to teams earlier this month after waiting to see what provincial regulations would be in place.

“As of right now, the government regulations allow adult sports to do full practices outdoors,” detailed Damen Schaub, Fighter Jets vice-president and general manager. “We’re starting it up and they’re using the basis of ‘if the Calgary Stampede can go, then we can play football’ is basically their thoughts.”

Teams within the league had the option of opting out of the season if they didn’t believe they could field a roster. According to Schaub, the Fort McMurray Monarchs and Peace Country Cowboys decided against playing this season.

Schaub said their board discussed the possibility of not hitting the field.

“We reached out to our current player roster (to) see what their interest levels were like. It seemed like we had enough guys interested in making it possible.”

The Fighter Jets are encouraging new players interested in playing to tryout. The only requirement is they must be at least 18-years-old.

“It’s a great experience for new guys,” expressed Schaub. “The 2019 returning players are excited to make more memories and finish off what we started. It’s still a new program so getting in now helps build a solid core for the future of this franchise. There’s no regrets in joining something that’s great for the community and great for your mental and physical health, where you can make new friends and memories along the way.”

They’re currently holding open practices on Wednesday and Friday nights at 7 p.m. at the Thomas Varughese Memorial Field, which is located behind the Cold Lake Energy Centre. Tryout camp is scheduled from June 25 to 27.

This season will see the Fighter Jets playing every team once.

The first week of play Cold Lake will be facing off in enemy territory against the Edmonton Elite on July 17. July 31 will be their first home game against the Calgary Wolfpack, followed by a road game on Aug. 7 when they face the Central Alberta Buccaneers.

The regular season will finish up on Aug. 14 against the Airdrie Irish.

“It’s short and sweet, but it’s something for the guys and it was necessary to keep our league going to have something of a season so we’re not losing guys to retirement,” noted Schaub.

He added, “It’s kind of the COVID-19 norm. Every league across the world has had to abbreviate their seasons.”

What exactly playoffs will look like is unknown, Schaub stated, but they’re scheduled to happen on Aug. 21 and 28. Schaub said the AFL has a meeting scheduled for July 5 to iron out the details and to “make sure every team is ready to play.”

With the province moving ahead with the Open for Summer Plan, Schaub doesn’t believe there will be any issues in accommodating fans during games at their field.