Finishing the season on a high note

The Cold Lake Figure Skating Club has a lot to celebrate, even though their season was cut short
May 20, 2021 10:30 AM By: Robynne Henry 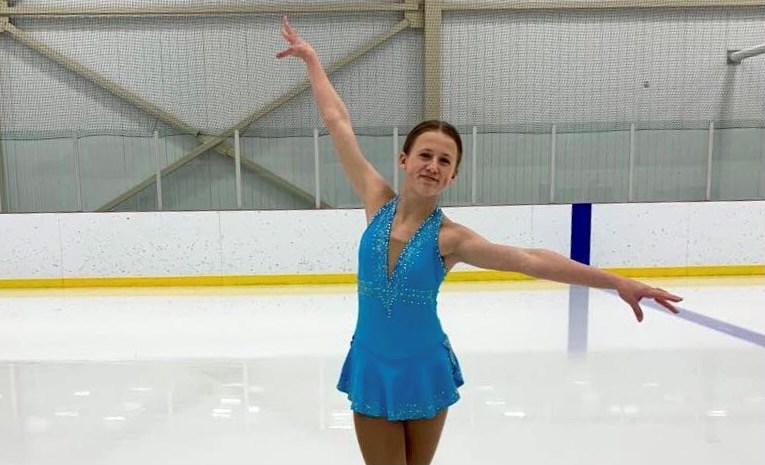 Cold Lake Figure Skating Club member Jessica Walsh was selected as one of the top nine athletes in Alberta for Women's Juvenile U14 on the 2021 Skate Canada: Alberta-NWT/Nun Junior Development TeamPhoto Submitted

COLD LAKE – A Cold Lake figure skater has proven she’s one of the best in her age category.

Jessica Walsh was selected as part of the top nine athletes in Alberta for women’s juvenile on the 2021 Skate Canada: Alberta/Northwest Territory and Nunavut Junior Development Team.

“Basically, what it means is it’s a competitive level that she’s skating at for her age,” detailed Rachelle Rupp, head coach for the Cold Lake Figure Skating Club. “All of Alberta recruits their competitors in that level.”

This wasn’t the only accolade Walsh received before their season was cut short due to provincial health restrictions. She, along with fellow Cold Lake figure skaters Grace Fedor and Kyla Rupp, all received triple gold status.

“That’s a really big thing,” their coach noted. “What that means is, in figure skating there’s four different disciplines, and so they’ve reached three out of four levels of gold testing. If you think about it, each different level has at least 10 different levels to reach gold, so they’ve passed and were able to achieve every level to get to the gold status.”

Due to COVID-19, a video of Walsh was submitted to be considered for the junior development team where she was judged on her doubles, jump combinations, step sequences, and spins.

When Walsh heard the news from her mom that she had been chosen, she had to contain her emotions because she was at school.

“I was just really excited,” she told Lakeland This Week.

Rupp said, “She definitely works hard and puts a lot of her energy into skating. It definitely has paid off for her.”

Walsh isn’t a stranger to being chosen for these sorts of groups. When she lived in Meadow Lake, SK, she was chosen to be part of Saskatchewan's junior development team and held a place there for two years.

The 14-year-old has been lacing up her skates since she was two. Her older sister got into the sport first and she accompanied her to the rink with their family. When she was old enough, she signed up and hasn’t looked back since.

Walsh isn’t a stranger to competing. She’s been attending competitions and showing her skills since she was five-years-old with her sister beside her.

When asked why she enjoys that aspect of the sport, Walsh said “it’s just fun because you get to see what’s out there and to make new friends.”

Like many sports this year, COVID-19 cut their season short and prevented competitions from going ahead. Even the team Walsh made will be different, with everyone hoping the provincial health restrictions are relaxed enough to allow for a competition season.

“We’re hoping that by next fall, we’ll be back at it,” Walsh noted.