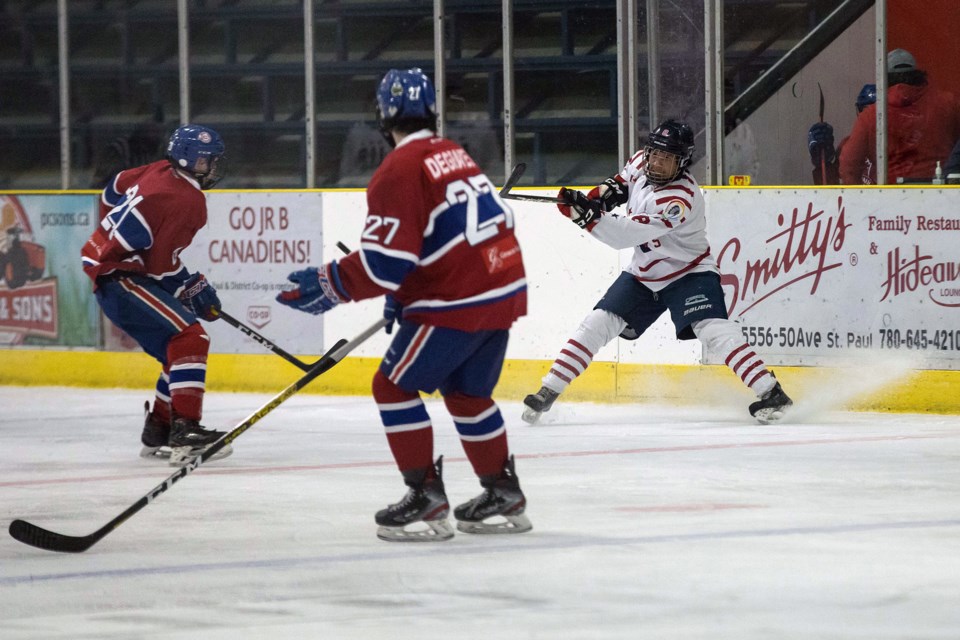 The Lac La Biche Clippers have only played one game this season, which was at the Clancy Richard Arena in St. Paul. Janice Huser photo.

The Junior B hockey season is officially taking a break - like most sports across the province - following the announcement of new restrictions on Nov. 24. The province-wide restrictions are in place for three weeks.

The updated regulations are in response to the rise in active cases across the province, and throughout the Lakeland over the past few weeks.

Stricter guidelines for the province mean that the Lac La Biche Clippers, the St. Paul Canadiens, and the Cold Lake Ice will now have to wait to see when they will be hitting the ice again.

Ali Fyith, the manager for the Clippers, says team officials, players and supporters are disappointed, but they knew going into the season would be unpredictable.

“The season was already condensed with the COVID protocol, we were booked for 12 games. So that was already a little disheartening for some of the kids in the community, and hockey lovers in general,” said Fyith. “We also knew that we are in a pandemic that no one’s ever seen before. It’s a moving target that changes rapidly.”

The Lac La Biche Clippers were only able to play one game this season against the St. Paul Canadiens with a score of 7-2 for the Canadiens. The second game against the Canadiens was cancelled following speculation that a player from the St. Paul Canadiens had contracted COVID-19. Every Lac La Biche player has been tested for the virus and gone into isolation, according to Fyith. He adds that the team is healthy and COVID-19 free.

“All of our team has been cleared, they are all out of isolation as of now, and healthy thankfully,” said Fyith. “We have monitored their symptoms with a health check on our team, we had everyone get tested. St. Paul did the same, and they had all of their coaches and players come back negative as well.”

Although the community has a healthy team, they can't lace up at all.

Practices will be cancelled for the Clippers — and all minor hockey and junior levels of sports — during the forced three-week shutdown. But to boost morale during this time, the team is staying in touch through social media platforms. Fyith says the general consensus from the team is that they are just looking forward to getting back on the ice, whenever it is safe to do so.

“They’ll be excited to return when we can hopefully do that. Ultimately, the Junior B team just wants what’s best for the community of Lac La Biche,” said Fyith. “We want everybody to be safe, following the rules and protocols that we put in place with the league, and working close with the government. We’re going to continue to do that, like everybody else, and we are in this together.”

With files from Janice Huser