Macaulay commits to the University of Alaska Fairbanks 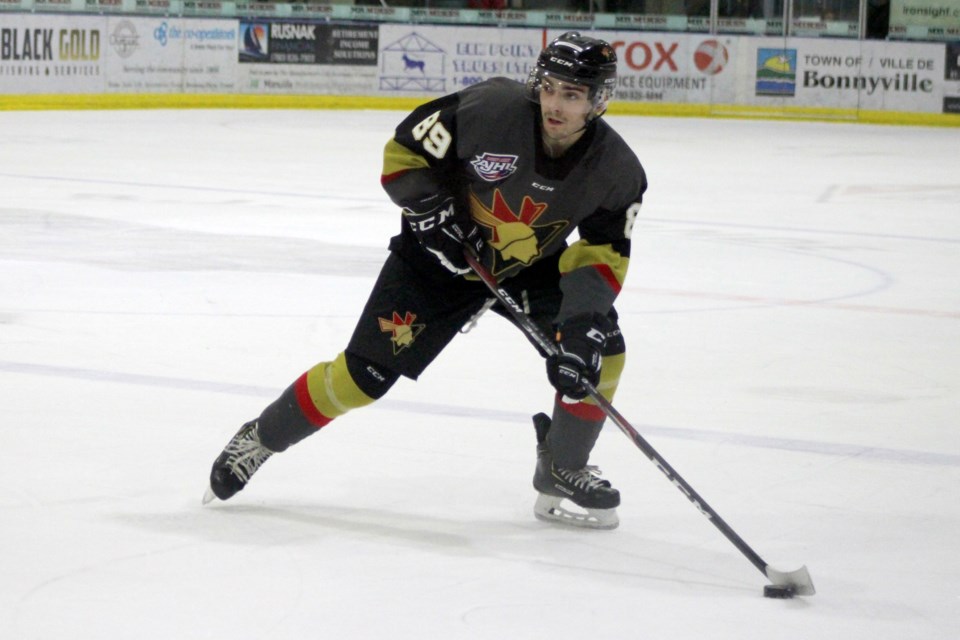 Bonnyville-native A.J. Macaulay made his hockey dreams of playing in the NCAA come true by signing with the University of Alaska Fairbanks. File photo.

BONNYVILLE – A.J. Macaulay will be trading in his Bonnyville Jr. A Pontiacs jersey for an Alaska Nannoks'.

The Bonnyville-native committed to the University of Alaska Fairbanks, which will see him joining the roster for the 2022/23 season.

“I’m super excited,” Macaulay told Lakeland This Week. “Even just to go up there and visit will be super exciting. I saw a PowerPoint (presentation) where I saw pictures of the camp and everything. It looked nice on there but I just want to see it in person. I’ve never been to Alaska before, so I think it looks beautiful up there.”

While a few schools reached out to the defensemen, there were two big factors that made the University of Alaska Fairbanks catch his attention.

“Their coaching staff seemed like really good people and the number one thing is development and moving their players on to the pro level. As well as I think the geographical aspect of Alaska fits my personality. I’d rather go to a place like that than a big city setting.”

Macaulay started his hockey career in the Bonnyville rinks. He played most of his minor years at home, before heading to Llodyminster for AAA bantam for two years and major midget. He spent one year playing for the Northern Alberta Extreme outside of Devon before he made his way back home as a Bonnyville Pontiac.

In his first year as a Pontiac, Macaulay scored one goal and had 13 assists in 55 games.

Playing for the local Alberta Junior Hockey League (AJHL) was a dream for Macaulay.

“They were always involved with hockey skates and stuff like that,” he recalled. “As kids, we always idolized them and it’s almost like a giving back type thing. Even when I was young, the Pontiacs would come on the ice with us and we would be like ‘yeah, we want to play for the Pontiacs’ and it just kind of stuck.”

When he signed with the Pontiacs, Macaulay hoped the team would assist him with making it to the National Collegiate Athletic Association (NCAA), which the University of Alaska Fairbanks is part of.

“It’s always nice to check off those goals and create new ones,” he noted.

Macaulay plans to take the next couple of years to prepare himself for college-level hockey. He’s still undecided on what program he will take, but he has lots of time before he has to make a final decision.

“I’m kind of thinking biological science or sports management. I don’t have to decide on a major until I’m a sophomore, I believe. I can go there for two years and I can take classes that interest me and then be more specific after that.”

Until then, he hopes to continue hitting the ice as a Pontiac for the rest of his AJHL career and wants to see the team win a league championship.