Pontiacs proud of their season 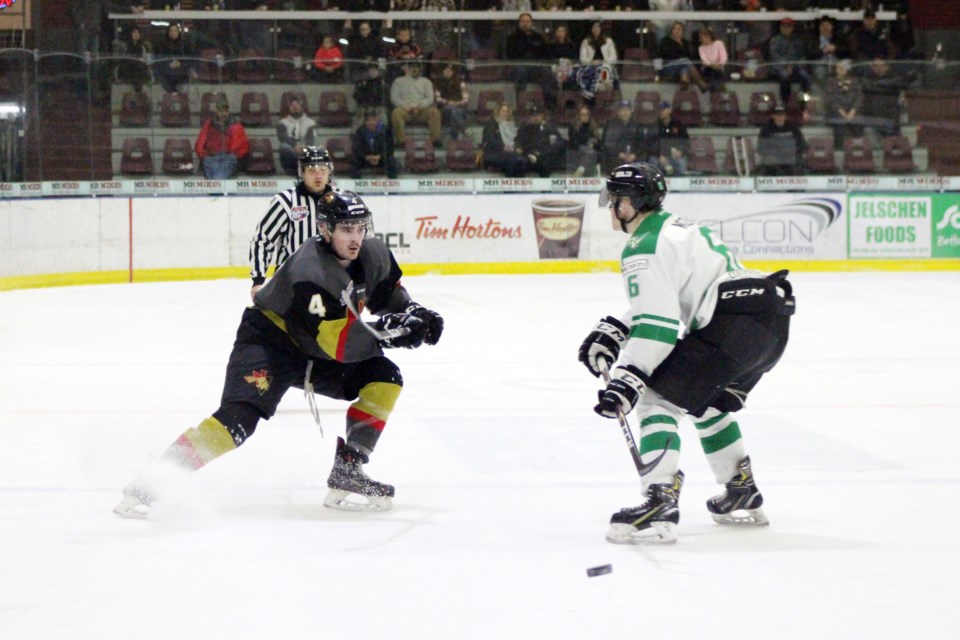 The Bonnyville Jr. A Pontiacs had their playoff run come to an end at the hands of the Drayton Valley Thunder. Photo by Robynne Henry.

BONNYVILLE – The Bonnyville Jr. A Pontiacs' season may have come to an end, but it was one that they can be proud of.

After finishing the regular season in fourth in the Alberta Junior Hockey League (AJHL) north division, the Pontiacs playoff dreams came to a halt when they fell to the hosting Drayton Valley Thunder 1-0 in game six of the best of seven series.

Head coach Rick Swan described their last matchup against the Thunder as “an exciting battle.”

Captain Joel Ray said the team was prepared when they hit the ice.

“Going into anybody’s rink for a playoff game is tough,” he noted.

The teams were evenly matched for the first period. The only goal of the evening went to Drayton Valley in the second frame.

“We put really everything that we could on net, and nothing seemed to go in for us,” Ray explained. “I think we gave it all the effort that we could have, and the bounces just weren’t going our way that game.”

The teams were neck-and-neck throughout the series, with the Thunder winning the first two games and the Pontiacs battling back to it tie up 2-2. Back-to-back wins in games five and six gave the Thunder the edge they needed to win it all.

Although it wasn’t the finish the Pontiacs wanted, their head coach was blown away by the effort they gave.

“You feel disappointed when you don’t win because at the Jr. A level, that’s the ultimate goal, and when you think about how the outcome relates to a person’s version of success, but you’re less disappointed when you ask your players to control what they can control and one of those things is to give absolutely everything that they have and leave everything on for the ice for 60 minutes.”

The final game not only marked the end of the season for the Pontiacs, but the last AJHL game for graduating players Ray, Daine Dubois, and Lucas Thorne.

“I felt like we had a good playoffs and I felt like I was playing my best,” noted Ray. “I really have no regrets about it, and I know the team was doing their best for me, Lucas, and Daine to try and keep our season and careers going here. It’s obviously tough to take right now, but I know we’ll look back at it and be happy with the effort that we put in.”

Thorne and Matthew McKim accepted scholarships to play for universities in the National Collegiate Athletic Association (NCAA) after they both achieved 80 points in the season, an accomplishment Swan said hasn’t happened since 2005/06 season.

Thorne was nominated for the AJHL most valuable player (MVP) honour, along with Ray receiving the nod for most dedicated player. Ray was also the recipient of the AJHL’s Inter Pipeline Scholarship.

Out of the 24 players, 20 are eligible to return to the ice as a Pontiac next season.

Swan said, “Our standard has risen, and we want to make sure that we bring in a product of individuals that are capable of reaching that high standard that we have.”

CAP Arena successful in bid for grant
Mar 24, 2020 12:00 PM
Comments
We welcome your feedback and encourage you to share your thoughts on this story. We ask that you be respectful of others and their points of view, refrain from personal attacks and stay on topic. To learn about our commenting policies and how we moderate, please read our Community Guidelines.