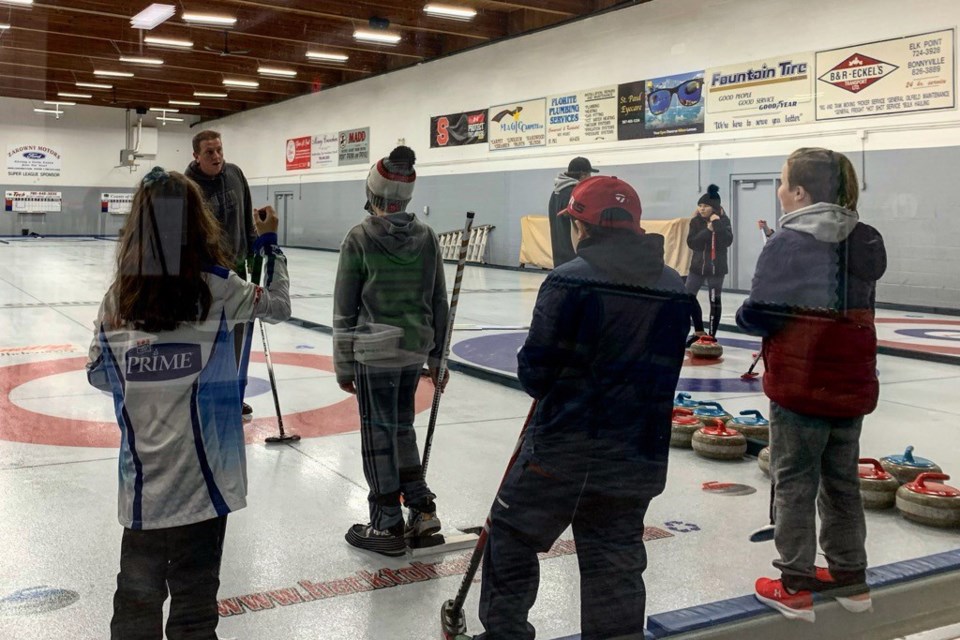 Young curlers in St. Paul only got in a couple practices this season, prior to the closure of the rink due to provincial restrictions.Janice Huser photo

ST. PAUL - Following in the footsteps of other curling clubs in Alberta, the St. Paul Curling Club announced on Tuesday night that it would be ending the season early because of restrictions in place due to the COVID-19 pandemic.

"I regret to announce that the St. Paul Curling Club will be closing its doors for the season as a result of the ongoing Government of Alberta restrictions," reads a letter signed by club president Troy Bohn.

While the club had hoped to get back to the ice following a temporary closure announced by the province in November, the length of time with enhanced measures in place has been extended for nearly 10 weeks.

"Effective today, we will be shutting down the plant for the season and laying off our ice technician," said Bohn, on Jan. 26.

The restrictions in place have caused financial hardships for many organizations, and the curling club is no exception. Operating expenses for the club are about $9,500 a month and "it's important to note that these expenses were incurred, regardless if our doors were open or not," explained Bohn.

Along with the closure of the facility, the club's scheduled casino dates were cancelled twice.

"We will be discussing the option of offering credits and/or partial reimbursements for league fees for the 2021/22 curling season," states Bohn in the letter. Exact details have not been determined.

"We need to be financially prudent to ensure that we are able to reopen next season."

Bohn thanked members for their ongoing support of the club.

"I look forward to see you all on the ice again next year."

During the Town of St. Paul council meeting on Jan. 25, it was noted by CAO Kim Heyman that the CAP Arena would be shut down early, also due to the closure of arenas and recreational facilities by the provincial government.

"The CAP has been closed," said Heyman.

She noted that Town of St. Paul staff who work at the arena have been notified and three people have been laid off. Typically, staff from the parks and recreation department simply transition to other tasks in the spring, but due to the early closure that isn't possible.

The CAO added that it's hard to even guess what will be happening with the restrictions in place.

Although some Albertans took to the streets earlier in the week to rally against the province's measures that have put the sport on hold for the past two months, St. Paul Minor Hockey president Bryce Balmer said there was no rally organized locally.

"Hockey Alberta has proposed a plan to the province to return to hockey safely," said Balmer. "If there is no new information from the government by Feb. 1, a decision will be made by Hockey Alberta in regards to league play and/or officially terminating the season."

But, that decision won't necessarily mean the end of hockey.

"A flexible or revamped look at a return to play model may be an option," said Balmer. Three versus three, or four versus four competition made be introduced to close out the season, for example.

"All of this depends on the government and what restrictions are lifted, if any," he added.