Lakeland sports associations left with questions after abrupt change to restrictions
Feb 7, 2021 11:33 AM By: Rob McKinley
Previous Next
1 / 1 The province has made a last-minute change to sport practices ... now allowing team practices in the first step of its 4-Step COVID framework. File: Bonnyville Nouvelle.
Expand
Previous Next

LAC LA BICHE - A press release issued by the provincial government on over the weekend has opened the possibility of some team sports teams and leagues being allowed to host practices and training camps. The surprise announcement comes just days after minor soccer and minor hockey associations across the province officially cancelled their season, with some associations offering player refunds.

"I think this announcement caught us all off guard especially since Hockey Alberta just cancelled the season," said Erick, responding to the Saturday morning press release issued by Alberta's Health Minister Tyler Shandro.

Starting Feb. 8, provincial officials are now saying children and youth will be allowed to participate in lessons, practices and conditioning activities for indoor and outdoor team-based minor sports and athletics. While practice times will be allowed, health officials are still prohibiting games from being played.

"I think this announcement caught us off guard ..."

The allowance is a change from the province's previous announcement on January 29 where only school-related sports activities were to be allowed to commence on February 8, in what is being called Step 1 of a four-step framework to ease restrictions. In that January 29 announcement, team practices or group exercise programs were still not allowed. But with just two days until the beginning of the Step 1 measures, provincial officials, including the province's Chief Medical Officer of Health Deena Hinshaw, changed their stance.

“Despite this small change, one thing remains the same: we all need to be cautious and make safe choices to limit the spread of COVID-19," said Hinshaw.  It is vital that everyone involved diligently follows the health measures as we move forward. Together, we can continue to reduce the spread and keep protecting our heath system.”

In Alberta communities, volunteers with sports associations like Lac La Biche minor hockey are now left with some choices to make — just days after making the difficult decisions to cancel their sporting seasons all together.

"I believe our best course of action is to see what next week brings as there are so many things to be considered," said Erick.

Part of those considerations for the hockey group is how to offer team practices after returning registration fees to all players. Ice rentals are part of the expenses covered by registration fees.

The new changes are also taking government officials some time to adapt, as the province's COVID-19 website on Sunday still showed restrictions on team practices. 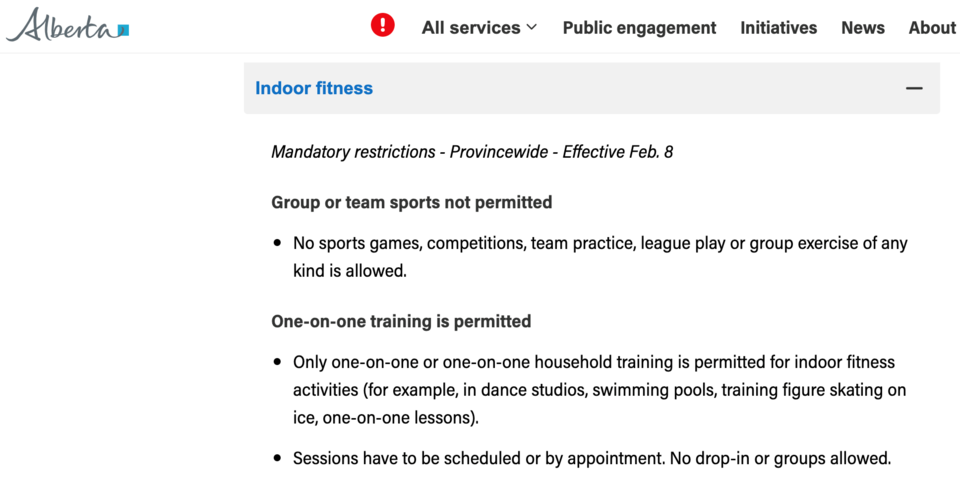 The Alberta government's COVID website still had previous information in its Step 1 restrictions on Sunday — despite a Saturday announcement that practices would be allowed.

Saturday's last-minute update to the February 8 start of Step 1 didn't make any additional changes to other areas included in the initial announcement, including the allowance for one-one-one training classes and partial openings of restaurants for table service.

The first step of the four-step framework is expected to run for three weeks. If a benchmark of 450 COVID-related hospitalizations across the province are reached, Step 2 will begin.