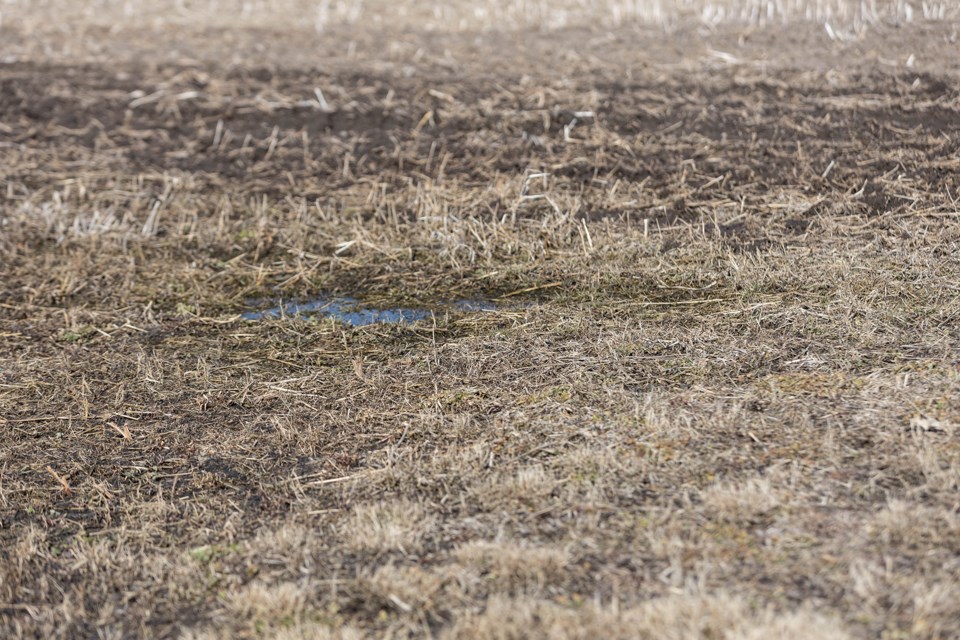 Soil moisture levels are low in many parts of the Lakeland, including St. Paul and Bonnyville regions.Janice Huser photo

LAKELAND - Don't believe everything you hear, especially when it comes to soil moisture.

Ralph Wright manages the Alberta Climate Information Service and he warns ag producers of the dangers of listening too closely to general predictions.

“If you see (a prediction) saying the prairies will be such-and-such, you have to be careful because any year in Alberta we have areas that are in drought and areas that are in excess moisture. Those big blanket predictions are very difficult to tie to anybody’s land,” he explained. “A good example is the drought in 2001/2002. In 2001 southern Alberta was suffering from a very serious drought, but up in your area you were okay. That entire situation reversed in 2002 where you were super dry and southern Alberta was wetter than normal."

In terms of what farmers can expect in our region currently, Wright said even that varies quite a bit.

“You are definitely drier than normal for soil moisture reserves,” stated Wright, adding the fall was also drier than usual.

Lack of rain and higher temperatures contribute to the current conditions, in addition to the winter season.

“Your snow packs were below normal this year for a couple of reasons, first of all, you didn’t get the amount of precipitation you would normally get over winter, and the other thing is you had some nice warm episodes,” Wright detailed. “Snow got beat up in the warm spells we had in December, then we had that cold weather mid-January to mid-February, but a lot of the snow left early because it warmed up again near the end of February and into March."

Dry conditions can be a blessing and a curse, he continued.

With the moisture levels being so low, there's an opportunity for the ground to take-in a heavy rainfall, should the area experience one similar to last year.

“If we get into another situation like that, it’s going to be good to say we’re dry so you have the capacity to absorb all of that moisture and not hamper the field operations so much,” expressed Wright.

However, Wright cautions farmers against seeding their fields too early in the season, even if things are looking good.

"(Fields are) relatively dry and people can get on them fairly soon. Just be careful about seeding too early because frost is always a risk, but sometimes seeding early is a benefit... Early seeding is wonderful if you don’t have a late-spring frost, because you can take advantage of the moisture early in the season, then escape the frost risk that you have in the fall.”

Wright noted it's too hard to predict what the future holds.

For example, just because a region experiences a dry winter, doesn't mean they're necessarily going to see the same in the warmer months. Wright described these variations as "big swings," when an area goes from extremely dry or moist to the complete opposite within a few months.

That being said, Wright explained, there are visible patterns.

“The other thing that is very important for producers, I know they understand this, but generally speaking... winter is the driest period of the year, October through to the end of March is very dry and you don’t start seeing the rains or rainy season beginning until about mid-May."

Soil moisture is an important aspect to seed germination and isn't just integral for crops, but also gardens.

"Without moisture, the seeds will not germinate. However, if you have too much, the seeds can rot. Every seed has a different tolerance, whereas some seeds, such as sweet peas for your garden, soaking them overnight helps to crack the seed coat and increases the germination rate of the seed, where others prefer much dryer conditions," Kellie Nichiporik, environmental program manager for the Lakeland Agriculture Research Association, detailed in an email.

She continued, "For gardeners looking to start their seeds, it's best to keep the soil moist, and consistent. If you let the soil dry out after the seed has started to germinate, it may result in the termination of that seed."