Towering spruce trees flanked the stage as the All Saints Ukrainian Orthodox Cultural Centre was transformed into a forest.
Oct 31, 2017 12:00 AM By: Lakeland Today Staff 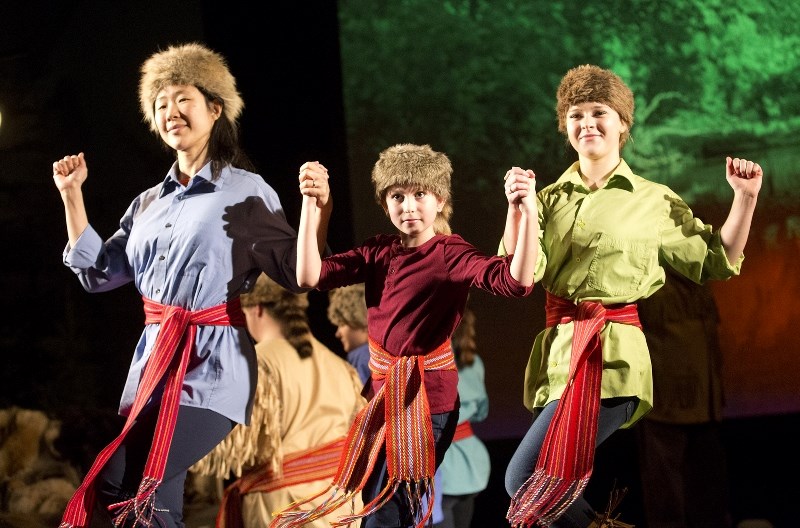 Towering spruce trees flanked the stage as the All Saints Ukrainian Orthodox Cultural Centre was transformed into a forest. The sound of drum rang out as the film opened, recognizing the grounds as Treaty 6 land, and thus commenced a journey that would transport the audience throughout shifting times and space, as they took in the Friday and Saturday night multimedia performances of 150 Years: Canada Yesterday, Today and Tomorrow.

The film, shot by local filmmaker Eric Spoeth in woods north of St. Paul, saw three teenagers walking and talking together, before entering a space that transported them to the stage, with key lighting changes creating a seamless transition as they entered their new, unfamiliar – and three-dimensional - surroundings.

The three find a white-haired man writing upon a desk, who tells them he is known by many names, whether it was a ‘magician’ or ‘Father Time,’ but described himself as a storyteller that would bring them back to their own time and place.

As the clock wound through the years, the three actors, played by Kamryn Coleman, Mathieu Malo, and Tianna Tanisichuk, flash through scenes of Canadian history, that unfolded to music that ranged from lively and captivating to seeking, written by Udo Mueller.

Canadian historic episodes came to life in brief vignettes, from the fur trading days, the setting up of homesteads, the railway and the First and Second World War, with First Nations history weaved throughout.

Filmed dance was echoed by live dance on stage, choreographed by Eva Miller, as the diversity of Canada was explored.

As the storyteller falls asleep, the clock flashes forward 50 years, to 2067, with the actors in the film convincingly played by similar-looking, but older, counterparts, as they together celebrate the birthday of the once-young First Nations girl they met in the woods. The faces around the table showed a mix of young and old, of different ethnicities and backgrounds, all sharing embraces and laughter as the camera pulled away into the sky, to show them waving from the ground.

In the closing moments of the show, performers brought out panels of art, each depicting scenes of Canadian life and history from the night, the handiwork of Glendon-area artist Marina Blake. The dancers, actors, musicians and artists all took to the stage as many in the audience stood to applaud an original extravaganza that cleverly together filmed and live performances, music, dance and art.

Artistic director Ken Fast said he hoped people left feeling inspired by the story, which is all about friendship, remembering history, and honouring Canada’s ancestors.

“It’s the type of thing you want the story to live on, after you step away from it. I certainly feel that way.”

The one-hour performance was first borne from a conversation between Spoeth and St. Paul & District Arts Foundation board member Val Pratch, when they learned that federal funding was available as part of Canada 150 grants.

“I think the initial vision, in my mind, was a multi-media piece, that could serve as a tool for reconciliation,” said Spoeth, adding they also saw the piece as reflecting the changing landscape of Canada over the years.

The pair wrote a one-page treatment as part of the grant application, and were successful. The final product took a year from conception to completion, with more than 100 people from the local region putting in more than 1,000 hours of time to bring that original vision to life.

“On a community level, the whole thing has been transformative, in bringing a love of the arts,” said Spoeth, noting many people who may never have seen themselves as actors, or dancers, or performers have discovered hidden talents and passions – which is one of the goals of the arts foundation.

“It’s really opening people’s eyes to the diversity of talent in the community.”

The grant and support from the County of St. Paul allowed the arts foundation to plan for a two-night showing, with Pratch saying the group has applied for further funding to put on the show in other communities, showcasing the “amazing talent” that was on display.

However, she noted, “It was a seamless performance, hard to replicate for it was given people who came together in a given time and with a place to share – difficult to replicate again.”

Dancer Emma Robertson expressed disbelief at the final product, saying it was altogether a “different” experience taking part in the production.

Summarizing the views of perhaps more than one in the audience, she said, “You just never think this could come out of a small town.”