Amendment made to Land Use Bylaw to allow flexibility with parking requirements for cannabis shops
Nov 16, 2020 8:00 AM By: Janice Huser 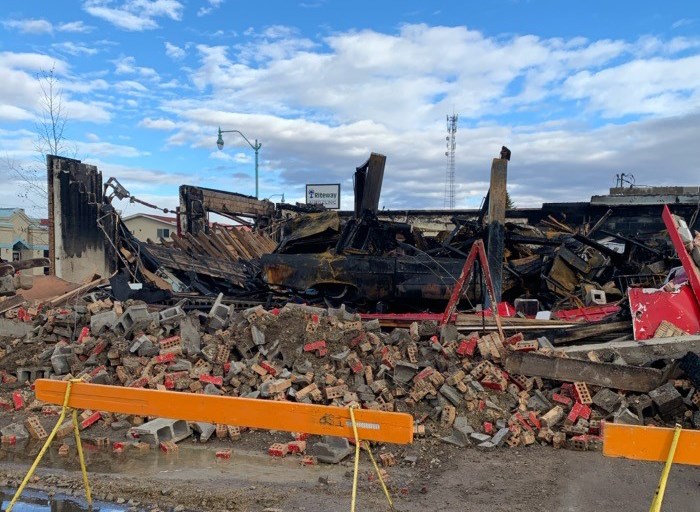 The owner of an automotive shop that burned on Oct. 26 has asked for fees to be waived at the St. Paul transfer station, as clean-up takes place. Council denied the request.

ST. PAUL - A request by a resident to waive the fees for disposing of some materials at the St. Paul Transfer station was denied by council at the Nov. 9 regular meeting.

Kelley Prymych asked council to consider waiving the fees for him to dispose of materials from a fire that occurred on Oct. 26

"With the unique and unfortunate circumstance that I have been faced with, in having to cleanup a very costly and uninsured accidental shop fire, I come to you and the town with a request of leniency to wave all dumping fees associated with the clean up and potentially a helping hand with use of cautionary men working signage if available," reads a letter, signed by Prymych.

The fire destroyed the automotive shop, which was located on St. Paul's main street.

"We do realize that the lack of insurance wasn’t anyone but our own faults however we are human, and we do make mistakes. It has already been an overwhelming and very expensive transition," said Prymych.

A motion to approve the request was denied by council, with councillors saying they did not want to set a precedent. Mayor Maureen Miller asked if there was an option to set up a payment plan, if needed. Administration said yes, that option could be available.

A public hearing for Proposed Bylaw 2020-14, a Land Use Bylaw (LUB) text amendment for a section that speaks to parking requirements for cannabis shops, was held on Nov. 9.

The change will require just one parking space per employee on shift at a shop, rather than also requiring public parking to be available. Public parking is available along the street, or avenue.

Speaking in favour of the amendment was Michael Forbes of Honeycomb Cannabis. He noted that some of the locations he's been involved with have much less parking that what the Town of St. Paul requires. He noted that interactions with customers are typically very quick at a cannabis shop.

Honeycomb Cannabis is looking to open a shop in St. Paul, and Forbes says he has already talked to the neighbouring businesses regarding parking. He notes those businesses have been "wonderful."

After the public hearing, motions for second and third readings of the bylaw were carried.

The Town of St. Paul is updating its Election Procedures Bylaw, to ensure everything is ready for the 2021 municipal election.

Municipalities are required to follow the Local Authorities Election Act (LAEA) for elections.

"Most of the information on election procedures is defined in the LAEA and the MGA . . . This bylaw is required to be passed no later than Dec. 31, the year before an election," according to the meeting agenda.

According to CAO Kim Heyman, the nomination period for the upcoming election opens Jan. 1 and closes one month before the election.

First reading of the updated bylaw was approved.

Town council passed a motion for approve $2,581 to the tourism committee, which is based on population - with the Town of Elk Point and the County of St. Paul also being asked to support the initiative.

Council is putting together a policy regarding live streamed public meetings. Videos will be kept accessible online to the public for three months after they are posted, according to the policy.

Minutes will still have to be recorded for the meetings, heard council. The policy was created using other policies that exist in other municipalities.

According to the policy, an effort will be made to have the meetings posted within three business days after the meeting.

A motion to proceed with administration's recommendation regarding the policy was carried.