Anyone looking for a bone-chilling psychological thriller this season may want to check out Mea Maxima Culpa by local filmmaker and director Eric Spoeth. It is an adaptation of the famous Edgar Allen Poe’s short story The Tell Tale Heart.
Dec 3, 2010 12:00 AM By: Lakeland Today Staff 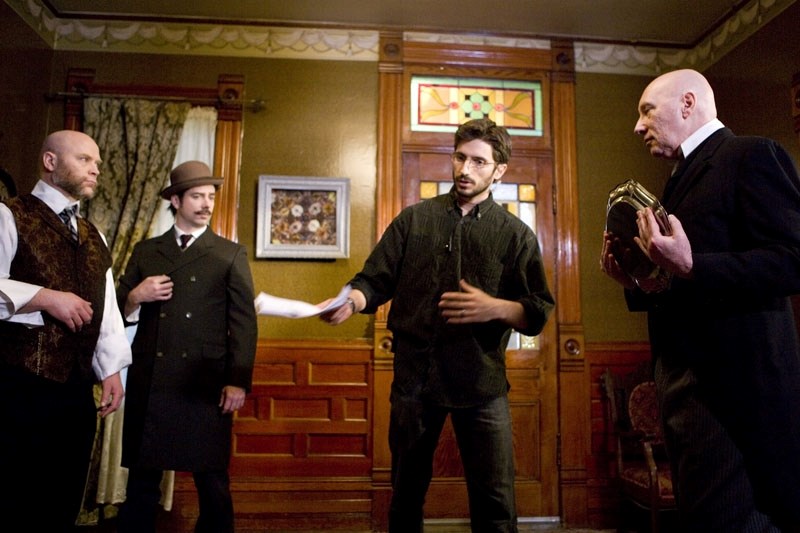 Anyone looking for a bone-chilling psychological thriller this season may want to check out Mea Maxima Culpa by local filmmaker and director Eric Spoeth. It is an adaptation of the famous Edgar Allen Poe’s short story The Tell Tale Heart.

“It is basically a film about mental illness,” explained Spoeth, who is from St. Paul. He said that the main character, a butler played by John Byrne, cares for a wealthy gentleman but is fixated on neatness and orderliness. The wealthy man, played by actor Frank C. Turner, is blind in one eye. “This one eye becomes an obsession (to the butler)… vexing him. So he plots to get rid of the eye even though he loves the master. Eventually he does a deed that he tries to cover up. When the police investigate, they don’t find anything but as the film reaches its climax, it becomes clear that the butler is haunted by the crime he has committed.”

Spoeth explains that his film goes beyond Poe’s story by going beyond the confession, showing a bit more of the repercussions of the incident. The co-producer for the project, Jason Sacha, wrote the adaptation.

“He used about 50 to 75 per cent of Edgar Allen Poe’s material and wrote more dialogue,” said Spoeth, explaining that Poe’s writing has a lot of narrative and describes what the characters are thinking - the challenge for the filmmaker was to express those thoughts visually and through dialogue.

The story is a period piece set at the turn of the century during the winter of 1899. It was shot in the Prince House at Heritage Park in Calgary.

“It came with all of the props and set dressing that I needed; I just had to supplement it a little bit,” said Spoeth. “I had a costume designer put together the wardrobe for the various characters and we did some research as to the accents used at the time.”

He said that he had difficulty finding a horse-drawn prisoners’ carriage but finally located a man named John Scott who did a lot of horse work for the Lord of the Rings show.

“Those are some of the pieces that were necessary to make it authentic,” said Spoeth.

Byrne, from Calgary, is a newcomer to film but has done theatre work before. Due to a genetic disease, eight years ago, he had a double lung transplant. Just one week after the completion of the film, he was selected to be a 2010 Olympic torchbearer.

Turner is a seasoned actor from Vancouver but he is originally from Alberta. He has appeared in over 120 Hollywood productions and has worked alongside stars such as Clint Eastwood, Robert De Niro, Sean Penn, Cuba Gooding and many others.

Spoeth began exploring filmmaking at about the age of 12, directing his brothers and sister in his short films. It began with an old school VHS video camera that his parents rented for him. He was just 17 when his first film was sent to a film festival in Edmonton.

He then spent a year in Australia studying filmmaking but has since returned to the St. Paul area. He has now completed four professional movies. Mea Maxima Culpa was funded through a grant from the Alberta Foundation for the Arts.

“Every film I have done, I try to build on the skills that I learned on the previous one and add a bit more to the production value and to the length, eventually building to a feature film,” said Spoeth.

Mea Maxima Culpa premiered at the Edmonton International Film Festival, held at the end of September, and now Spoeth is hoping to enter it in the international short-film festival, Festival du Court Metrage de Clermont-Ferrand, to be held in France in February. Sunshine Video may soon carry the film for rent. To find out more about the film, check http://www.spoeth.com.

Artwork of the late Margo Lagassé on exhibition
Jul 6, 2020 3:37 PM
Comments
We welcome your feedback and encourage you to share your thoughts. We ask that you be respectful of others and their points of view, refrain from personal attacks and stay on topic. To learn about our commenting policies and how we moderate, please read our Community Guidelines.