Gerry's Magic Carpets has been purchased by a local brother and sister duo who plan to continue to run the business with the same quality of service and products.
Jun 15, 2021 8:30 AM By: Janice Huser 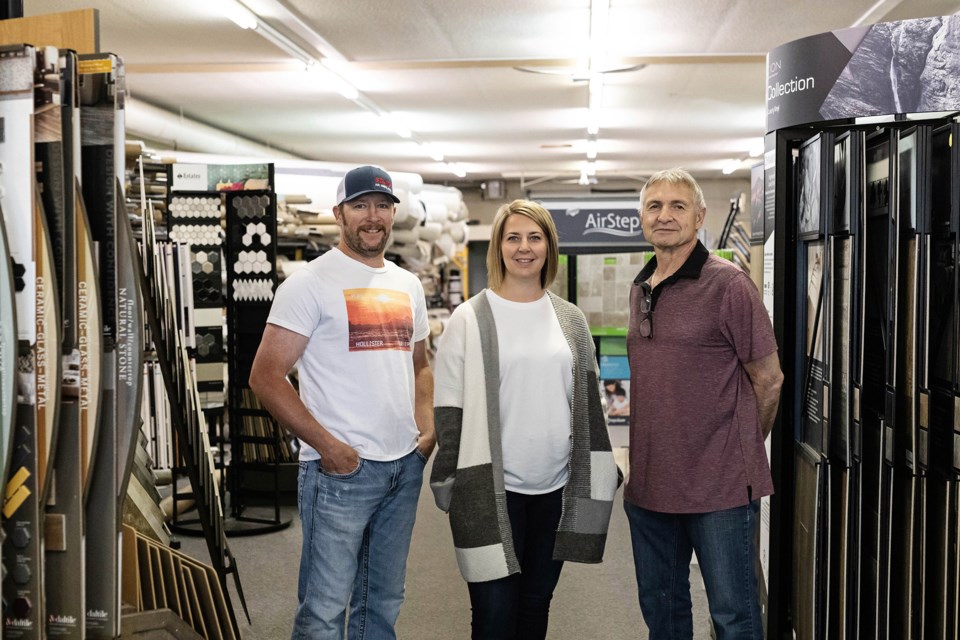 ST. PAUL - A sign located along Highway 29, west of St. Paul, points to the north, showing the way toward a long-standing business that many in the community are familiar with.

Contractors know the blue building, as do many people who have renovated or built a home. Gerry's Magic Carpets has been a staple in the construction community for over 30 years. It was in 1986 that Gerry Martin bought an already established business, Adray Carpet and Furniture, later known as Adray Carpet Warehouse. The business' roots in the community actually go back to about 1969.

When he purchased the business in the 1980s, Martin had been installing flooring for about a decade.

After a successful career in the industry, Martin has now decided to step away and enjoy a slower pace of life. While he has no specific plans for his nearing retirement, Martin admits he will no doubt miss dealing with people every day. His keen ability to chat with anyone, and create long-standing relationships is obvious. As soon as he hangs up the phone, he's quick to dial another number.

The foundation the business has been built on is something that drew Curtis Piquette and his sister Arianne Crook to the business. Piquette has been an electrical contractor for 15 years, and has been involved in construction since he was just a teenager. It was during one of Piquette's visits to Gerry's Magic Carpets that Martin mentioned his business was up for sale.

Looking for a bit more predictability in his day-to-day life, Piquette was drawn to the opportunity. Piquette and Crook will officially take over the business on June 14.

Last week, Piquette and Crook spent time at the business, learning the ropes from the long-time owner himself. Martin says he's happy that someone was able to purchase the business, and believes there is a need in the region for a place that specializes in offering flooring products and installation.

Piquette and Crook, grew up in the St. Vincent area, and have strong ties to the community. Piquette also believes it's in his family's blood to "be our own bosses."

While he acknowledges the new endeavour will be different, he's up to the challenge. Working alongside his sister, the pair brings a blend of skills to the table. Crook, who resides in the Bonnyville area, has a background in bookkeeping, human resources, and office management. The two say they got along well growing up, and with only 14 months between them in age, they often shared the same friends.

With Martin stepping into retirement, and the business changing hands, a slight name-change will be in order. But, the new owners are paying tribute to the former owner and have chosen Magic Floors and Finishings as the new name. A few expanded services are also in the works, in the form of other interior finishes.

In the end, it will be the same quality products and service that customers and contractors have experienced over the years, and the same location.

When asked what advice Martin has shared with the new owners, the first word that comes up is 'honesty,' quickly followed by 'generosity.'

Martin says he believes in giving back to the community, a notion that Crook and Piquette support.

"We have big shoes to fill," admits Crook.

Retirement will no doubt be a change of pace for Martin, who has created relationships with people far and wide, and recalls one incident when he was on a trip to Halifax. As he was walking out of a restaurant, a man stopped and said "Hi Gerry!"

While Martin didn't recognize the man at first, it turned out it was someone he had once sold flooring to.

And while he knows he will miss interacting with people on a daily basis, Martin says he also knows it's time to enjoy his retirement.