It’s only left the fire hall a handful of times for training purposes since it arrived in St Paul in late 2016, and it had yet to attend an actual fire call as of Friday evening, so the newness of the St.
0
Feb 7, 2017 12:00 AM By: Janice Huser 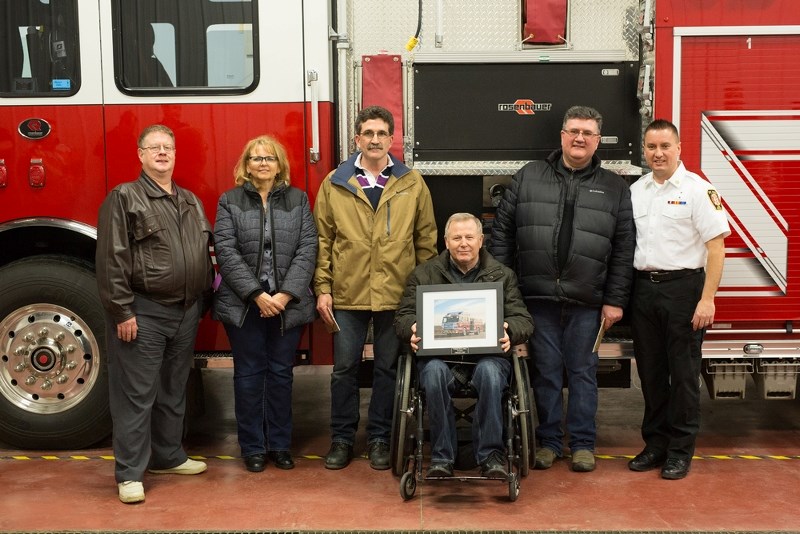 It’s only left the fire hall a handful of times for training purposes since it arrived in St Paul in late 2016, and it had yet to attend an actual fire call as of Friday evening, so the newness of the St. Paul Fire Department’s most recent purchase was still very noticeable.

The new fire truck, which is to be used only within Town of St. Paul limits, has been a work in progress since 2015, and on Friday evening, the large investment was on display, looking shiny and clean for guests.

Town of St. Paul council, staff, and volunteers with the St. Paul Fire department filled the hall on Friday night, while an official unveiling of the new piece of equipment took place. The truck has been in service since Dec. 9, but so far has been rarely used.

“We got the shiniest, and the biggest, and the best,” said Fire Chief Trevor Kotowich, as he spoke about the truck during the unveiling. He noted that the project actually came in slightly under the $550,000 budget set aside for it – coming in at $548,000.

“This truck will service businesses and residences for years to come,” said Kotowich, adding, “It will always be in town to offer protection.”

He acknowledged the support received from the Town of St. Paul toward the project.

The project began with Kotowich and other fire fighters touring a number of fire halls in the province, and then followed with a list of needs and wants. The truck was custom built in South Dakota and carried six firefighters, which will be an asset.

“It is the best truck that the money provided can buy,” said Kotowich.

Town of St. Paul Mayor Glenn Andersen also spoke to the crowd, and passed his thanks on to the fire department and its members, which he had personally belonged to for many years.

He acknowledged that he knows it takes a lot of time to plan a project of this size, and “usually it’s the mechanics in the crowd that know what they want.”

Andersen added that council was happy to support the project, and wanted something that worked for the fire fighters, but also looked good.

“On behalf of the entire community – thank you for what you do. We are glad to give you something that makes your job easier . . . We wish you all the best with it,” said the mayor.

Hospital fundraiser aims to raise over $100,000 for new equipment
Jan 22, 2020 1:45 PM
Comments
We welcome your feedback and encourage you to share your thoughts on this story. We ask that you be respectful of others and their points of view, refrain from personal attacks and stay on topic. To learn about our commenting policies and how we moderate, please read our Community Guidelines.