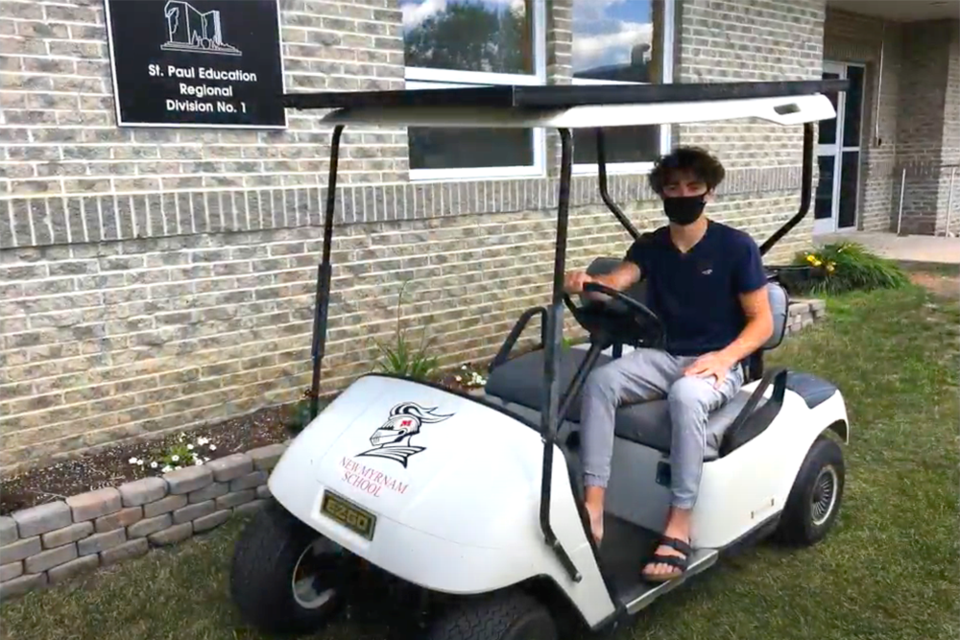 Students at New Myrnam School won $1,000 for their school by participating in a re-energy challenge, which involved refurbishing old golf carts.Photo supplied

MYRNAM - A group of young minds from New Myrnam School stood out in a unique challenge, winning first place and $1,000 for their school.

Students in Myrnam took part in the GreenLearning Re-Energy Challenge, turning used golf carts that were in need of repair into functioning renewable energy carts. A local community organization was selling the used golf carts, and students took advantage of the opportunity, retrofitting them with photovoltaic (PV) modules (solar panels) to create the end product.

The project not only covered curriculum outcomes, but it did so in an engaging and captivating way, all while teaching students that saving energy is achievable. The project allowed for students to use renewable energy and also reuse existing carts, reducing the need for recycling or re-manufacturing.

According to Robert Tymofichuk, a teacher at New Myrnam School, the project "captivated our students."

"It provided a real world context to the curriculum in many subjects - for example, our grade 9 science electricity curriculum outcomes were nearly all covered through the work on designing and creating our zero emissions renewable energy vehicle."

Students in various grade levels were able to take part in the project, and work to retrofit the remaining six golf carts will continue in the next school year.

"In the past four years New Myrnam School has been involved in projects that involve energy," explained Tymofichuk. "Each year, we come up with an authentic, engaging, hands-on project that is curriculum based. GreenLearning had a challenge to build an electric vehicle model. Each year, the projects are more intense so this past year we wanted to create a zero emissions renewable energy vehicle that we could use."

Students wanted the vehicle to have longevity and decided it was best to do a frame up restoration before retrofitting the carts with the special charge controller and large solar panel.

Two other sponsors helped make the project a reality.

"We had applied to Inside Education for their A+ for Energy Grant and were one of 25 schools selected from across the province," said Tymofichuk. "We were also one of the successful recipients... of the Alberta Student Action Challenge from Alberta Environment and Parks."

That funding helped the school purchase even used golf carts and start the process.

"As we complete the carts, the funds will be used to continue project based work at New Myrnam School," said Tymofichuk. And the innovation isn't going to stop any time soon at New Myrnam School - there are more projects coming up, including the construction of a net zero tiny home.

“We believe that youth are champions of a renewable energy future, and so it is amazing to see and support the remarkable work these students have done in reimagining golf carts into working models of solar powered, clean technologies,” said Mary McGrath, Executive Director at GreenLearning.

The Re-Energy Challenge is designed to encourage students to think critically and collaboratively about a complex environmental issue. The challenge is put out to students annually. GreenLearning is a national non-profit that creates free programs about energy, climate change and green economy that engage and empower youth to create positive change for our evolving world.