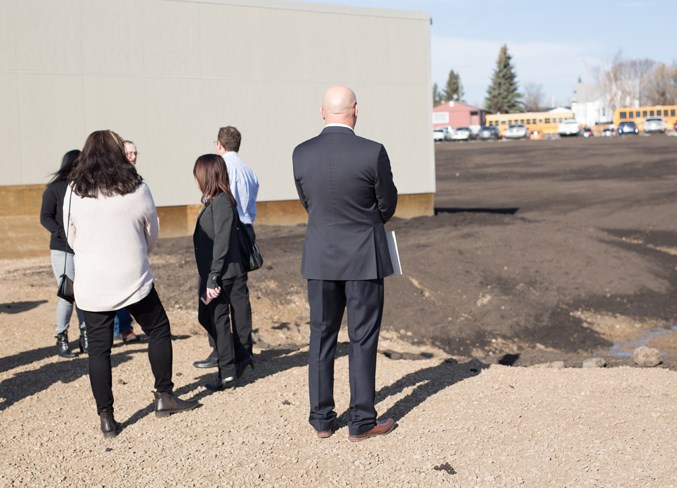 A tour that included UCP MLA Dave Hanson, St. Paul Education Regional Division board members, Superintendent Glen Brodziak, the Two Hills Mennonite School principal, and representatives from the Town of Two Hills and County of Two Hills took place on Thursday afternoon, as a way to voice further concerns about site work that has yet to be complete at the school.

In a story published in the Oct. 16 issue of the St. Paul Journal, a Government of Alberta spokesperson with the Office of the Minister for Seniors and Housing/Infrastructure was quoted as saying some of the setbacks at the site were due to the Town of Two Hills working on a storm sewer nearby, and the school division requesting a design change to the west bus loop.

The comment from the province also stated that the school had been using an entrance where no path was originally intended.

Concerns about the comments from the provincial government arose, following publication of the story. Last week's tour offered further information and context to the challenges being experienced on a day-to-day basis at the school.

Principal Ryan Morey began the tour in the same boot room that was the centre of conversation during the Oct. 10 SPERD board meeting, where photos were shown of the situation that had come about due to the wet and muddy site outside the school.

The boot room is the largest one in the school, and typically holds over 200 pairs of outdoor shoes for students from Grades 2 through 5.

"The kids use this entrance to go to the playground for recess," said the principal.

Morey explained that students have been carrying their boots through the school, to the front doors to get to the bus at the end of the day. Following a fall snowfall that resulted in muddy conditions, the mud on students' shoes would be strewn across the school, "making a mess everywhere."

Even after clean-up of the boot room took place, mud could still be seen on the walls, pointed out Morey. The principal described the site around the school as a "soupy mess." Efforts were made to reduce the mess, which included using an alternate entrance, but by that entrance also ended up full of mud.

"The next day we stayed inside for recesses all day because it was just too much of a mess," said Morey, addinng, "The fact is, that when this is finished . . . students will be using this entrance." Students won't be carrying their boots through the school to the front entrance forever, and the boot room is basically the main entrance for students from Grades 2 to 5.

Late this summer, it looked as though work would be done, and sod would be installed, said Brodziak, as he spoke on Thursday.

"We were looking at sod coming in and they were going to pave a pathway. . .  so a change order was put in, and we waited two, three weeks and then all of a sudden there was a discrepancy. Really, it was about pricing," said Brodziak. "So all of a sudden, that fell apart."

Black dirt was eventually brought in. Prior to the black dirt, it was just clay on the site, which still would have resulted in a mess following the wet snowfall, said Brodziak.

"At SPERD's expense, we brought the gravel in," he added.

Messages were sent to parents, from the school and SPERD, apologizing for the mess.

While some work has been done over the last couple of weeks, the area being worked on has been available for months, yet work wasn't done earlier, said Morey. To suggest the town delayed anything, is "ridiculous, because it had no impact whatsoever," he added.

"May, June, July, beautiful weather, could have got a lot of work done. . . nothing happened. That's been frustrating . . . To suggest we're using the wrong entrance is frustrating," said Morey.

The school construction project includes a number of partners, from the province to contractors and tradespeople.

"What we find in the meetings, is lots of finger pointing," said Morey. "We're kind of caught in the middle."

"It's our kids who are really the ones caught in the middle," added Brodziak.

"I think it's important that everyone sees and has a visual of what the school has been going through," said SPERD board chair Heather Starosielski, as she took part in the tour. It has been a project that's been in the works since 2012, and the division has a comparable project with Ashmont School that saw doors open, sod down, and the bus lane finished, in just two years.

"We can speculate on what's happened here at Two Hills Mennonite School. There's definitely, I think, some issues that are happening between the general contractor and the government, but again, we're not part of those conversations," said Starosielski.

She described the comments from the province stating the town and school board as being the reason work was held up as being "completely untrue."

Mayor of Two Hills Leonard Ewanishan said he felt the town and the school division have been working hand-in-hand throughout the project, and have a very good working relationship.

CAO of the Town of Two Hills Elsie Kiziak noted she was happy the school board and staff have come forward stating it wasn't the town holding up the project, saying, "we don't have to defend ourselves."

As the tour moved outdoors, an area with a large "swale" could be seen. The area has been described as being comparable to a moat, with a small amount of water running in it 24/7, and larger amounts when there is heaving rainfall or snow melting.

"This is not a swale," said Morey, as he looked down on the area. He noted that SPERD staff did offer the idea of putting a pipe underground, rather than keeping the area wide open, but that didn't happen. The principal said he has concerns about the possibility of the culverts freezing up and creating a "lake." The area is just a few meters away from one of the school's entrances, and leads directly into the small area of the playground that is currently usable.

On Thursday, during the tour, one child could be seen climbing down into one of the areas where a culvert exists, retrieving a soccer ball as a game took place nearby.

"Kids' soccer balls would go over all the time. So I'd go get them," said Morey, adding, one time he stepped into mud past his ankles. "If you stepped in there right now, you'd lose your shoe."

Safety concerns around the area continue to go unanswered, according to those in attendance. Requests to fence off the area have not been answered. While Morey says the province agreed to fence off one part of the swale, nothing has been done yet.

"For the last five and a half years, we've been having recesses where the K to 3 (students) go outside and the 4 to 6 (students) say in, and they alternate recesses, so they basically have two thirds of the recesses they used to," explained the principal.

As the tour ended, Starosielski said she's hopeful work will wrap up soon, and that it will be done properly.

"It's a concern for St. Paul Education. Once we completely take possession (of the school), it becomes our problem. So of course we want it done right the first time. So, we're trying to be patient and hopefully it gets done."