A large group of parents, children, students and other supporters took part in a peaceful protest on Thursday, in an effort to create awareness and find answers to a situation that’s been ongoing at École du Sommet for 50 days.
May 9, 2018 10:05 AM By: Janice Huser 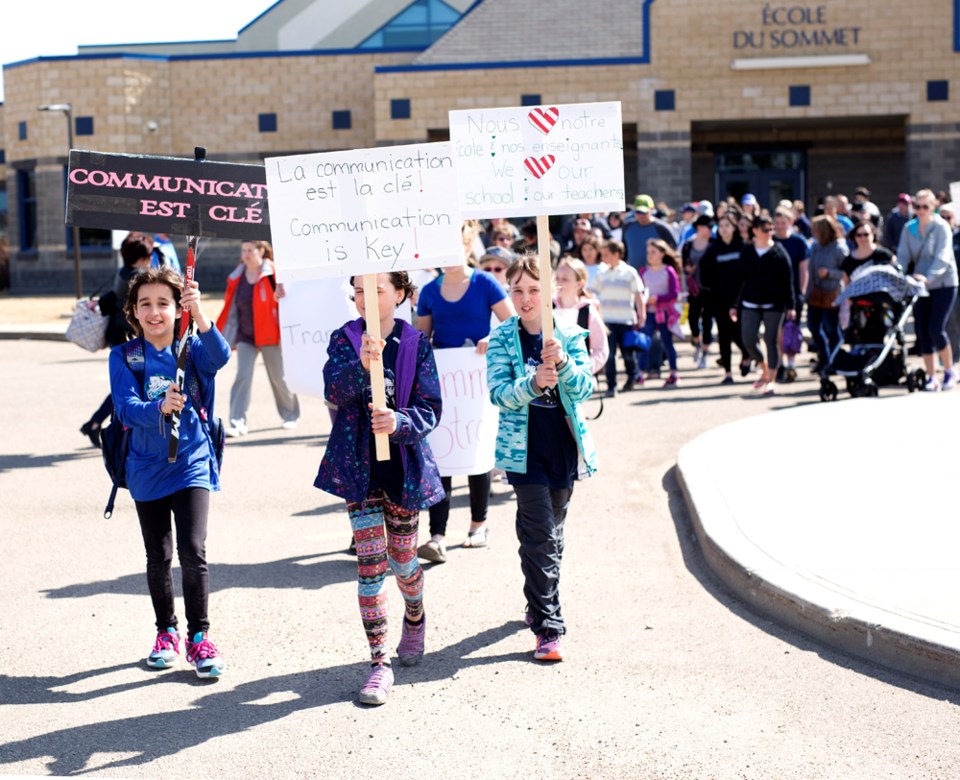 Parents and children took part in a protest that saw them walk from Ecole du Sommet to the ECFER office, May 3.

A large group of parents, children, students and other supporters took part in a peaceful protest on Thursday, in an effort to create awareness and find answers to a situation that’s been ongoing at École du Sommet for 50 days.

In March, parents found out that the school’s principal, Yvan Beaudoin, had been “suspended” although that term was later recanted according to parents, and they have since been told the principal is “absent.”

Parent spokesperson Suzanne Stybel read a statement prior to the protest on Thursday. The protest saw the large crowd walk from École du Sommet to the East Central Francophone Education Region (ECFER) office, on main street.

“Since day one, we the parents have made it clear that we will respect the legalities of the situation, but still require proper lines of communication while the board investigates this matter,” said Stybel. Parents state a lack of communication with the ECFER board as being an ongoing concern, along with the notion that some students were allegedly taken off school property for interviews, without parental consent.

Parents are upset that there was no disciplinary taken toward the board member(s) or division employee(s) who were involved in the alleged situation.

“We are outraged that in 45 days, our superintendent still has not returned any phone calls or emails about our concerns,” reads the statement. “All we have received are three letters, one on March 21, 2018 from central office staff, one on April 3, 2018, and one on April 30, 2018, from president Reginald Roy with no information pertaining to our real concerns, such as conflicts of interest within the board, and the high salary of our superintendent, to name a few,” reads the statement.

Parents questioned what appears they feel is a refusal by the board to communicate with parents.

“They continue to deny our requests for proper communication. What are they hiding from? To what purpose is this all serving? The further they shut us out, the more concerns are raised. People who have nothing to hide, hide nothing,” read Stybel.

Parents continue to have confidence in the school itself.

“An investigation of the principal and of the school was unnecessary to determine what we already knew to be true: we have full confidence in the team at École du Sommet.”

Parents feel the board has shown a lack of transparency, and created an environment that does not value welcoming, caring, respectful and safe learning, or one that values diversity and promotes a sense of belonging.

On Monday, Stybel noted that parents continue to feel shut out, with doors often locked at the board office, and phones calls going unanswered.

The written statement that Stybel read also noted that the parent group requested the resignation of superintendent Marc Dumont and board president Reginald Roy.

“As parents and stakeholders, we demand transparency, honesty, and better leadership for our children, teachers, and principals,” reads the statement. Stybel added that a letter requesting the resignation of Dumont and Roy was sent again on May 5.

Also in attendance during Thursday’s protest was a group of Grade 12 students from École du Sommet. Students were attempting to deliver a petition that had been signed by nearly all of the school’s junior high and senior high students.

The petition was asking the school board to return the principal to his position. Believe he was wrongly terminated.

Grade 12 student Nick Tucker described Beaudoin as being “Loving, caring, anything you’d want in a principal. (He) loves his job, loves his students.”

When asked if the students knew why their principal was absent, Tucker said he could not comment, noting everything was simply “hearsay” and rumours.

“We haven’t been given enough information . . . that’s another reason we are upset with the school board,” said Tucker.

Looking around at the crowd that had gathered, Tucker noted that the school community is “a tight knit community,” and “We’re just trying to do what’s right.”

After their first attempt to deliver the petition, students said they were told there was no one available at the board office to take the document.

Stybel later confirmed that the students slipped the petition under a door at the division office, and also emailed the petition.

The St. Paul Journal reached out to the ECFER for a response following Thursday’s protest. A statement from the board of trustees was received via email from Dumont.

“There are members of our community who would have us believe that our school system has come to a standstill. Nothing could be further from the truth. Our schools are operating. Our teachers are teaching. And our students are learning,” read the statement.

“Sadly, some parents are actually attempting to disrupt school life - through their actions, accusations, aggressive demands, bullying, and publicity stunts. They make it more difficult for us to provide that ‘welcoming, benevolent, respectful, and secure learning environment that values diversity and promotes a sense of belonging’ to which we, as elected school trustees are committed.”

The statement further stated, “These parents are adopting an approach that is not constructive and that will do nothing to resolve the human resource issue we are managing. In the meantime, we must make every effort to allow, Alain Mahé, the acting principal, and the teachers at École du Sommet to do their jobs and help our children get through the school year. That must be our top priority.”

The board again confirmed it has hired an “independent, experienced investigator” to put together a report “that will lead to a resolution of this issue.”

Hanson pointed to a “lack of information” that is feeding speculation and rumours around the dismissal of the principal.

The situation “drives a wedge between the parents and the elected board,” said Hanson.

In response, Eggen said, “We take this matter very seriously and we’re monitoring the situation very closely.” He acknowledged that the school board had undertaken an investigation.

Hanson noted that the high stress levels in the school have had an affect on students, and he asked Eggen if he could confirm or deny the concern that students may have been taken off school property without parental consent.

Eggen reaffirmed that an investigation was taking place around “this H.R. matter,” and “We hope to see a conclusion to this situation.” He added that it’s important to respect the process, and that it’s the school board in charge of the investigation, not Alberta Education.

An emailed statement from Alberta Education, following a request by the Journal to update the situation later in the week read: “Alberta Education’s first priority is ensuring that students and staff are in a welcoming, caring, respectful and safe learning environment.”

The email was received from Lindsay Harvey, Minister Eggen’s press secretary. She confirmed that the minister had received a handful of letters from concerned parents on the matter.

“In accordance with the School Act, East Central Francophone Education Region has the lead in conducting the investigation of this matter. It is our understanding that the board hired an independent person to investigate matters at École du Sommet and the investigation is underway,” said Harvey.

Alberta Education, citing the situation as a human resources matter between the employee and the employer, could not answer any further questions.

On Friday, Hanson said his main concern was that students were allegedly taken off school property without parental consent.

“To me, that is the biggest issue, regardless of what the issue is,” said Hanson. He added that it doesn’t matter who you are or where your kids go to school, it is unacceptable for someone to take a child off school property without permission.

When asked if he could clarify why the situation unfolded in the first place, he said, “I don’t know the ‘why.’ I wish I did. That’s the question everybody’s asking.” He added that if the board and teachers are being stifled because of a piece of legislation, “then come out and tell us which piece of legislation it falls under.”

Hanson said the situation is clearly causing a lot of grief among families at the school.

“Everyone talks about how the students are first, and how we’re most concerned about the students – well then prove it,” said Hanson, adding, “Let’s get this situation under control.”