Road to reconciliation starts with truth

Is it possible to repair the relationship between Aboriginal people and the institutions responsible for establishing and running Indian Residential Schools (IRS) in Canada? The answer is “Yes,” according to Chief Wilton Littlechild, one of three com
Jan 11, 2010 12:00 AM By: Lakeland Today Staff 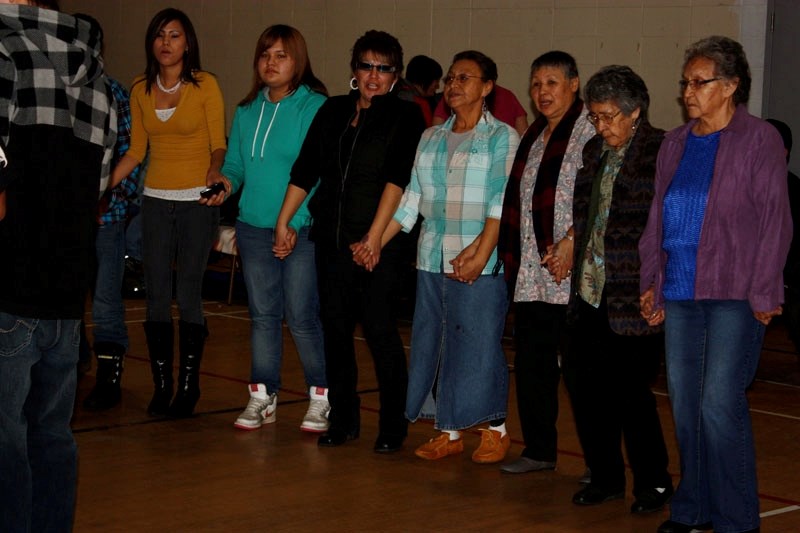 Hundreds of people attended the third annual memorial feast and round dance, held in honour of deceased former students of Blue Quills and all other Indian residential schools, last Friday night at the SPAN gym.

Is it possible to repair the relationship between Aboriginal people and the institutions responsible for establishing and running Indian Residential Schools (IRS) in Canada? The answer is “Yes,” according to Chief Wilton Littlechild, one of three commissionaires on the Truth and Reconciliation Comission (TRC), who was in St. Paul last week to attend the third annual Indian Residential School gathering.

“We are just beginning to explore what (reconciliation) means and what it looks like,” said Littlechild. The road to reconciliation, according to Littlechild, begins with discovering the truth about residential schools, which attempted to assimilate native children into the mainstream Canadian culture. Past students of such schools remember being separated from their families and not being allowed to speak their own language, among other things.

Littlechild explained that the first step in the reconciliation process and part of the mandate of the TRC is story gathering.

“Anyone who wants to tell their stories about their experience in residential schools, both negative and positive, we want to hear those stories and collect them,” said Littlechild, explaining the information will be used to establish a national research centre so that everyone has access to the history of the schools.

Recording devices were set up in rooms at St. Paul Abilities Network (SPAN), where the event took place, to collect stories. For some, these stories bring back powerful memories of emotional and physical abuse, so talking about them can be very difficult. There were a number of residential school health support workers on hand to assist anyone who may have needed help.

Edward Marten, an Indian Residential School resolution health support worker, had a booth set up in the SPAN gym about using art to help people tell their stories.

Marten attended Holy Angels Residential School in Fort Chipewyan until he was 15, when he ran away to live on his own. As an adult, he struggled to heal from the wounds left by attending Holy Angels. He said it took him over three months to draw his first picture of his experience at the residential school.

“While I was doing it, anger set in,” said Marten. “I was mad at my mother and dad. I was mad at the residential school priests but I had to go back through all that to get the help that I needed.”

He explained that after the first image was completed, he felt compelled to continue to draw the story of his life in a series of pictures.

“Healing came through the art,” Marten said, adding that as he completes one picture, more come to him. Through the pictures, he has ultimately found a path to internal peace and learned to focus on what he really values in life - his wife and two children.

Marten explained that art is a good medium for many people who just can’t put the experience into words. He now offers workshops throughout the province about how to use art for healing.

Eric Large, a residential school coordinator who is from Saddle Lake, was one of the local residents that chose to share his story with the TRC. He said he wrote six pages but could have easily written 600 pages on his experiences attending Blue Quills Residential School.

Large said that one of the best things to come out of the IRS gathering is when individuals reach out and ask for help from him and his organization to overcome past negative experiences. “Sometimes they don’t realize that it affects their families and their community.”

Littlechild explained not everyone can come forward because sometimes the wounds are too deep. He said that is why the story gathering process is completely optional but he marvels at the ability of some former residential school students to forgive and to move on.

Council opts for temporary solution for skatepark safety concern
Oct 21, 2020 2:00 PM
Comments
We welcome your feedback and encourage you to share your thoughts. We ask that you be respectful of others and their points of view, refrain from personal attacks and stay on topic. To learn about our commenting policies and how we moderate, please read our Community Guidelines.