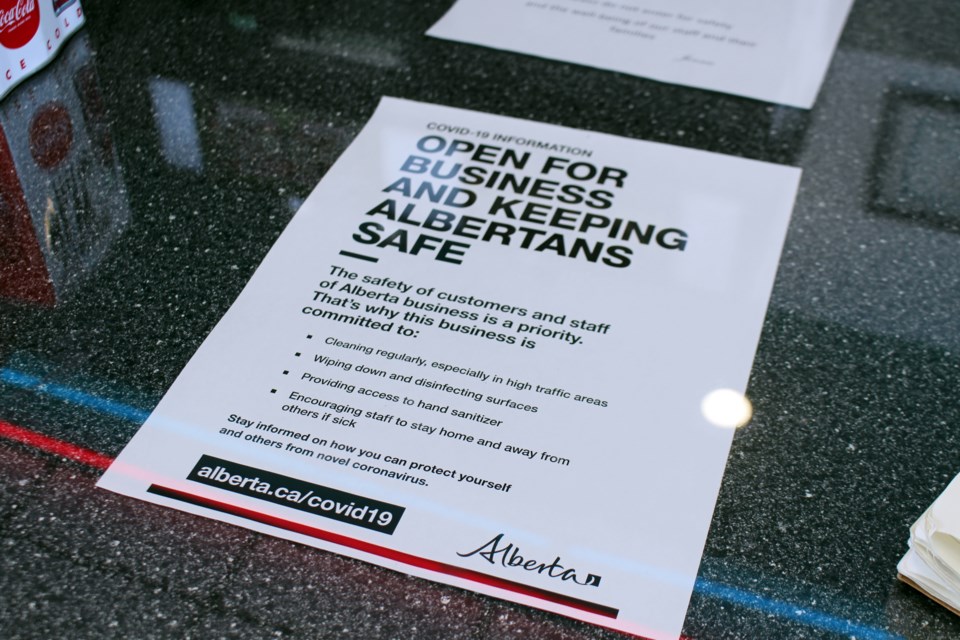 Jennie’s Diner and Bakery is among the restaurants hoping to keep their doors open, and they’re taking precautions to ensure the safety of their workers and customers. Photo by Robynne Henry.

BONNYVILLE – Local businesses are facing an uncertain future as the coronavirus pandemic continues.

“It’s scary in a way because I don’t know how this is going to impact us,” said Jennie Hamel, owner of Jennie’s Diner and Bakery. “If people don’t come in, we still have bills to pay, which means we’re not going forward.”

Mitch Sylvestre, owner of Sylvestre Source for Sports, added, “The whole problem with this thing is if you knew it was going to be six to eight weeks long, then you could react.”

On Tuesday, March 17, Premier Jason Kenney declared a state of public health emergency in Alberta due to the increasing number of COVID-19 cases in the province. Albertans are prohibited from visiting casinos, nightclubs and bars, recreation centres, and fitness facilities.

Sit-down restaurants, cafés, coffee shops, food courts, among other businesses in the food service industry, can only have up to 50 per cent of their capacity to a maximum of 50 people. Take-out, delivery, and drive-through services are still available.

While the majority of stores and businesses are permitted to remain open at this time, the push for self-isolation and mandated quarantines that come with the coronavirus are keeping people in their homes and local streets empty.

“With that, businesses are starting to worry. What’s it going to look like for me two months down the road? We have businesses that are probably going to close their doors because of the economic reality we’re currently living in, and now they’ve got this fear of what’s going to happen,” explained Bonnyville and District Chamber of Commerce executive director Serina Parsons.

Both Hamel and Sylvestre have seen significant drops in their foot traffic in recent weeks, which they were expecting when the province started introducing greater measures to combat the spread of the disease.

The global nature of the pandemic is a travel agent's worst nightmare, with flight and border restrictions in place around the world.

Travel agent Marlene George, with Bonnyville-based Go Travel with Marlene and Sherry, said they started seeing an influx in clients cancelling vacations even before non-essential travel was prohibited.

“If I didn’t cancel my own trip, I would have been kind of forced to do it now the way other people are,” she noted. “I guess the mode of thinking is that it’s not an option anymore, with borders closing and airlines shutting in and things like that.”

George has seen all of their suppliers “being very lenient with their cancellations and rescheduling practices right from free rescheduling to full refunds.”

“Some are offering full refunds while others are offering cancellations with a $100 fee kind of thing for administration fees or whatever. That’s in place to help people who didn’t purchase any sort of extra insurance to cover their trips. I think what they’re offering is excellent,” she continued.

When the dust clears around the world, George believes it’s going to take some time for people to feel comfortable about packing their bags and hopping on a plane.

Ensuring his staff can continue to work the number of hours they're used to is a priority for Min.

“Unless the government shuts us down, I like to keep my workers with the same hours as much as I can.”

“I’m hoping to keep staff on for as long as I can. Hopefully, the government comes out with some employment insurance (EI) programs for them. I’ve got some employees from other countries, and some of them have no back up. We’re trying to keep them eating as much as we can, and we’ll see what happens.”

The balance of trying to keep their doors open and making sure their employees and customers are safe is a constant battle for local businesses.

“It’s not that we don’t want you here, it’s that my staff can’t afford to be sick. They can’t afford to take it back to their families, so if you want us to stay open and be safe, think about that first,” she told the Nouvelle, adding they’ve increased their cleaning schedules to an almost hourly routine.

“We’re double disinfecting everything that’s on the tables, we’re doing extra wipe downs, and trying not to reuse stuff for anybody. Anything anybody puts on the table, it goes back and gets washed before it goes back to anybody else.”

What will happen in the coming days, weeks, and even months is a cause for concern for many local business owners, but Parsons wants to assure them they're not in this alone.

“Be patient, and take it day by day. The government, Alberta and Canada chambers, everyone is working tirelessly to make sure that we come out on the other end of this, but right now we’re in the early stages of everything where public health and safety is number one. Addressing that is very time consuming, so we don’t have a lot of answers right now.”

Municipalities offering a helping hand
Mar 26, 2020 5:30 PM
Comments
We welcome your feedback and encourage you to share your thoughts on this story. We ask that you be respectful of others and their points of view, refrain from personal attacks and stay on topic. To learn about our commenting policies and how we moderate, please read our Community Guidelines.