Bonnyville celebrates the resiliency of businesses

The Bonnyville and District Chamber of Commerce hosted the Our Resiliency Runs Deep Awards on Thursday, May 27
May 31, 2021 4:00 PM By: Robynne Henry 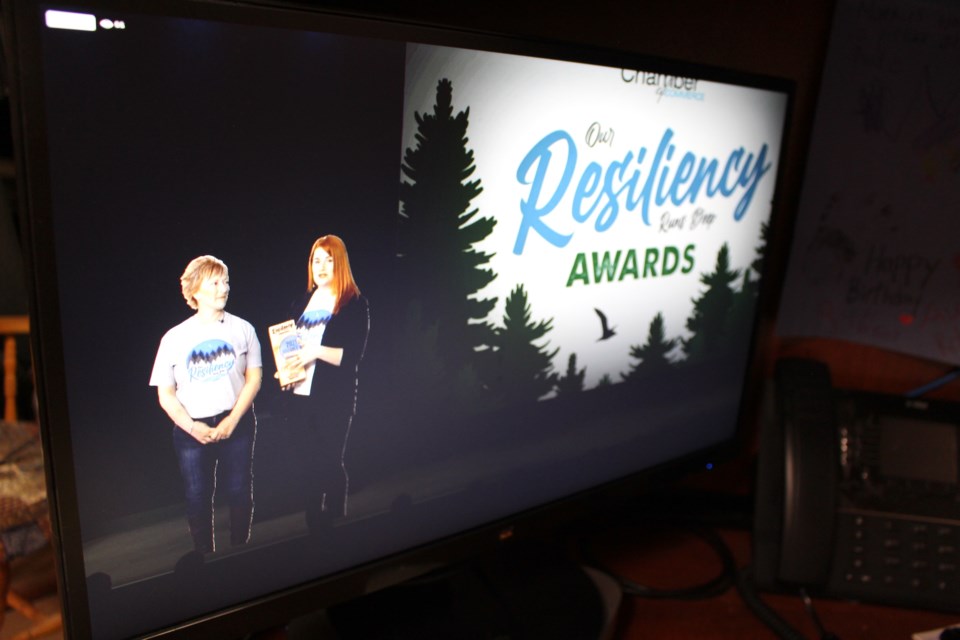 (left to right) Bonnyville and District Chamber of Commerce President Lise Fielding and executive director Serina Parsons were the hosts of the Our Resiliency Runs Deep Awards on Thursday, May 27. Photo by Robynne Henry.

BONNYVILLE – The resiliency of businesses who call Bonnyville home were on virtual display.

The Bonnyville and District Chamber of Commerce hosted their inaugural Our Resiliency Runs Deep Awards on Thursday, May 27, where local entrepreneurs were recognized for surviving and thriving during the COVID-19 pandemic.

Chamber president Lise Fielding stressed the evening was about the local business community and celebrating them.

“It’s about everything you’ve overcome and continue to overcome,” she said during the ceremony. “It’s about how you faced immense challenges and came back even stronger. Tonight, it’s about our community, who have rallied together to nominate you. Nearly 100 nominations representing over 35 businesses were brought forward for these amazing awards. Tonight is about the successful ways we’ve come together and shown resiliency throughout such an unprecedented time.”

Executive Director Serina Parsons added, “It’s about our businesses and everything that we’ve all overcome in the last year. That’s really what these awards are all about.”

Parsons said that when the idea for the Our Resiliency Runs Deep Awards first came up, it was a chance for the chamber to focus on the positives that happened in a difficult year.

“We could talk forever and a day about the challenges that have been faced by our businesses, faced us as individuals, and faced our community over the last year and a half and even longer,” she expressed. “But tonight, we wanted to show that in times of struggle, when things get hard, we come together. I’m so proud to be part of this community and so proud to be able to represent our local businesses tonight and to say ‘thank you for your persevering, for everything that you’ve done and thank you... to all of our community members, to nominate so many businesses that we’re celebrating this evening.”

The internal leadership award went to Lakeland Co-op while emerging entrepreneur was snagged by Gouda and Brie Charcuterie.

Mythik Games was chosen for the adaptation award, which Parsons described as the category that “celebrated a business that successfully pivoted their business model in order to stay competitive.”

The local board game and escape room business began offering Game Night in a Box, where families could gather around the table to enjoy board games when the pandemic began and they were forced to close their doors.

Co-owner Myk Morris offered his appreciation to those who nominated them for the awards.

“It’s really awesome to have a community that comes out and supports us the way they have with all the hardships that have happened with COVID-19,” he noted. “It’s a true honour. We can’t thank everybody enough, and we can’t wait to see everybody once we’re allowed to be open for in-person entertainment again.”

The award for social media presence was given to Underground Barre, and Core Juice Co. was chosen for the courage to come back category.

The give back award had some stiff competition, with nine nominees vying for the honour.

It went to the Lakeland Credit Union. Among the many ways they give back to the local communities was a $100,000 donation they made to the food banks in Bonnyville and Cold Lake last year.

CEO John Peters said they were “ecstatic and excited” to win.

“Hopefully in the years to come, we can continue to give back to the Bonnyville community,” he expressed.

The pandemic perseverance award was described by Parsons as the evening’s “Best Picture.”

“It's the award that we’ve all been waiting for because it really has a little bit (of everything) and is all-encompassing everything that we have done tonight,” she explained. “A business that has shown resiliency, strength, has pivoted their social media, has pivoted their business model... and overall, not only survived but thrived during this pandemic and that’s an amazing thing.”

The business that won had been nominated in three of the categories and Parsons said their application “really stood out.” It was Journey North Cider Co.

Co-owner Kelly Fieger said, “It’s really nice to be recognized for everything that we’re trying to do around town. We want to bring people into town and get the tourism going. COVID-19 has been really tough but we’ve been doing everything that we can to get our product out there and put Bonnyville on the map.”

There was also the frontline hero award, which recognized a worker who kept everything going during the pandemic. The honour went to Sobeys cashier Wanda Gaboury.