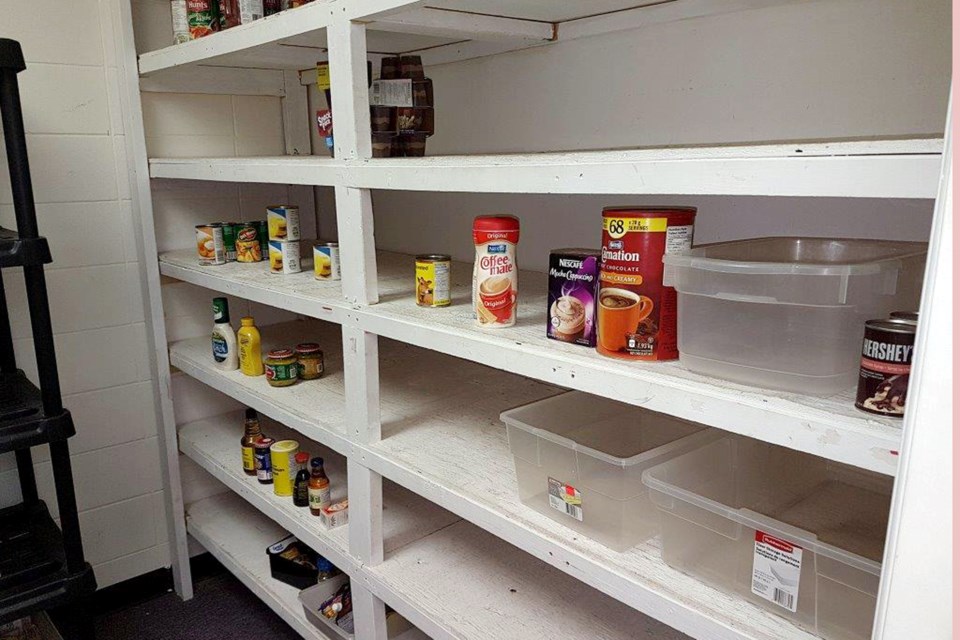 The Bonnyville Food Bank's shelves are getting bare as donations have declined. They're looking for support to keep up with the demand they’re anticipating in the near future. Photo submitted.

BONNYVILLE – Local food banks are keeping up with demand, and preparing for what’s to come.

Bonnyville Friendship Centre assistant executive director Pauline Mawer, who oversees the food bank, said they saw roughly 240 clients in March, which is on par with their numbers for this time of year.

“Probably for the rest of April, I’ll be seeing a lot of these people who have been laid off, who have no income coming in,” she explained.

Mawer stressed “the food bank is for the whole community.”

“There’s a misconception that we only serve the aboriginal community, and that’s not true. If you’re hungry, please come see me… I know at this time and moment in this month with all that’s going on, people are afraid to go outdoors but we can get them to you somehow.”

Since the Bonnyville Friendship Centre closed their doors to the public in March, the number of donations they've received had a significant decline. Right now, they’re encouraging residents to make monetary donations through bonnyvillefriendshipcentre.com to allow them to purchase items needed for their clients.

The only people allowed in the building are staff, but hamper pick-ups are still happening on Tuesdays.

“What we do is we go to the door, they stand six-feet back, we push the cart out, they take the hamper, we pull the cart in, and sanitize and wash it.”

Mawer added, “We get the clients ready ahead of time with their name and we just have to add the meat and bread. That way, they’re not standing out there for a long time and we’re not rushing.”

For those who aren’t able to get to the Bonnyville Friendship Centre, drop-offs can be arranged. Mawer has been in contact with the Bonnyville and District FCSS, who offered to assist by having their staff members do deliveries.

The Cold Lake Food Bank is also preparing for an influx of clients, though they haven't noticed an increase yet.

“The main goal of the food bank is to operate as safely as we can, but not out of fear or without compassion,” expressed board member Randy McDonald. “We want to see people’s needs met and we want to do it in a loving way instead of a fearful way.”

“A lot of our volunteers are older and they chose that they don’t want to expose themselves, and we support them,” noted McDonald.

McDonald said they’re working to keep everything moving, and are following the guidelines put in place by Alberta Health Services (AHS).

The Cold Lake Food Bank is accepting monetary and food donations, which can be made through coldlakefoodbank@incentre.net or by phone at 780-201-6589.