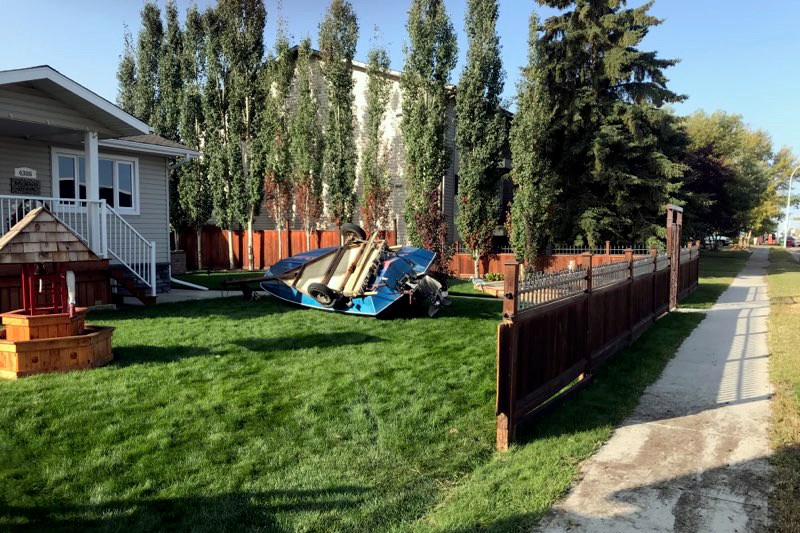 A trailer and boat ended up in a yard along main street in Bonnyville on Sept. 18. Photo submitted.

BONNYVILLE – A driver received multiple violation tickets after a blue speedboat sailed through a fence and into someone’s yard on Friday.

Bonnyville RCMP responded to a report on Sept. 18 after the incident occured due to a broken piece of equipment.

“He was hauling a blue speed boat behind his truck and the hitch popped out, ripped the safety chain out, the boat disconnected and went through the fence at 4306 50 Ave.,” said Sgt. Kim Hillier.

Members attended and assisted in the completion of appropriate documents, and multiple violation tickets were issued as a result of the collision.

Hi Energy Gym was the target of a break and enter. Bonnyville RCMP received a report on Sept. 16 that the local gym was broken into the night before.

“Property was rifled through and multiple items were stolen, including martial arts gi, shoes, personal items, fitness equipment, and clothes,” explained Hillier. “Some property has been recovered and returned to the complainant, however, many items remain outstanding.”

Anyone with any information is encouraged to contact Bonnyville RCMP at 780-343-7200.

A “much-needed” laptop has been stolen from Kehewin School.

“The vice-principal of the Kehewin Elementary School reported that the school had been broken into over the weekend and they were now missing a much-needed laptop,” Hillier said. “This investigation remains open and tips from the public are being sought.”

A member from the Lakeland Crime Reduction Unit conducted a traffic stop and located a wanted male on Sept. 12.

During the search of the vehicle, the male was found to have throwing knives in his possession.

Monte Badger, 36, of Kehewin has been charged with weapons possession contrary to an order, failure to surrender to authorization, and failure to comply with a release order condition.

He was scheduled to appear in court on Sept. 17.

Then, while conducting patrols on Hwy. 55 near Hwy. 881 on Sept. 14, a member from the Lakeland Crime Reduction Unit observed an older model F250 pick up truck parked on the side of the highway.

The vehicle matched the description of a truck that had been reported stolen out of Elk Point earlier this month and further investigation confirmed it was indeed the truck.

The vehicle was towed to the Bonnyville detachment for analysis.

Staff from the Red Apple filed a report after a customer left two fake $100 bills with staff.

The money was given to the employees who were working at the time, who then realized right away they weren’t real and advised local RCMP of the male who brought in the bills.

The local detachment received a report on Sept. 14 of unknown people in a vacant apartment with the door locked.

The door was breached while the suspects were inside and a 28-year-old male and a 25-year-old female were arrested.

Both accused were released on undertakings to appear in court.

RCMP continue to received reports of vehicles being stolen or broken into, throughout the Bonnyville area.

A complainant reported on Sept. 13 that his 2005 Maroon Ford F250 was stolen from the 44 Ave. area. The license plate was BJH 8590, it was low on gas, and the complainant still has the keys of the vehicle. Members made extensive patrols, however, they were unable to locate the stolen truck.

RCMP also received a report on Sept. 15 that someone’s 2005 Red GMC Sierra truck had been stolen at some point during the last 10 days. The complainant had left his truck in a parking lot on 55 Ave., and then left for work camp for two weeks.

“The break-in caused damage to the door lock, steering column and ignition,” Hillier said. “The vehicle was rummaged through and registration was taken. RCMP will be reviewing surveillance video in an attempt to identify suspects.”

Two cargo trailers were also broken into recently, and numerous tools and generators were stolen from a shop. Video and serial numbers are being provided to the RCMP and any information on the theft would be welcome.

RCMP investigate shooting in Cherry Grove
Oct 21, 2020 1:35 PM
Comments
We welcome your feedback and encourage you to share your thoughts. We ask that you be respectful of others and their points of view, refrain from personal attacks and stay on topic. To learn about our commenting policies and how we moderate, please read our Community Guidelines.