Bringing the crowns to Bonnyville

There's royalty among us, as not one, but two local girls brought home crowns from an Alberta-wide pageant. Riwa Kamaleddine won the title of this year's Miss East-Central Alberta and Dominique Simard was named Miss Teen East-Central Alberta.
Mar 21, 2017 1:00 AM By: Kristen Heliotis 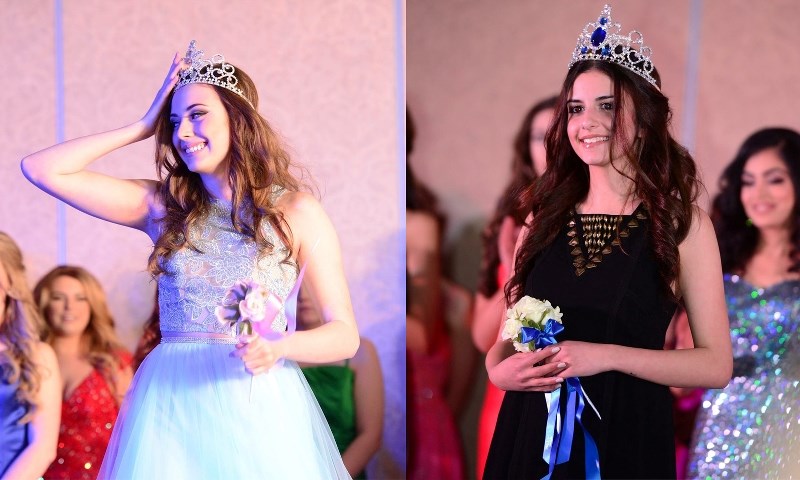 There's royalty among us, as not one, but two local girls brought home crowns from an Alberta-wide pageant.

For the 19-year-old Kamaleddine, this was her first experience in the pageant world. Something she's always wanted to try, the HR student finally found time to take a break from her studies and make the trip south to compete.

“I wanted to take this opportunity, and I'm so glad I did. You make so many friendships there and you learn so many things… You're meeting new people, you get to have a voice, and those are the reasons I applied,” said Kamaleddine.

Submitting her application only a couple weeks before the pageant, she didn't have much time to prepare. Each contestant is required to complete an interview before they're accepted to be in the pageant, as well as an in-person interview the weekend of. The day of the pageant there's an opening number, the swimsuit portion of the competition, and then the evening gown.

“I didn't have much time to look for an evening gown, so it was just something in my closet. I was a little nervous about that but it all worked out in the end.”

Contestants also must come up with a platform – an issue they're passionate about that, if crowned, they'll use their title to help bring awareness to. For Kamaleddine, it's the growing problem of eating disorders.

“A lot of people think it's not a mental illness, they see it as a choice. I want to bring awareness, to a lot of young girls especially who want to be thin and get a better body without putting the effort in. I want to show there are so many other ways to gain your ideal body without inflicting self-harm.”

Stressing the need to put more of a focus on healthy eating and exercise, the topic is one that the new Miss East-Central Alberta can relate to.

“Being in a world where having the perfect body is something you're judged on, I got affected with eating disorders a few years ago,” expressed Kamaleddine. “It was a friend that helped me through it. I realized that not eating, or not keeping it in my stomach afterwards, is not a healthy way to go about it.”

Going against the pageant stereotypes, the Miss Alberta pageants focus on self-confidence and body-positivity. Kamaleddine explained that the girls competing are even told the judges aren't looking for the skinniest girl, but someone who takes care of their body.

“Being in the pageant world, there are all types of bodies. There's not one that's perfect. That's what I want girls to know, that all bodies are perfect, their body is perfect.”

Now that she has the crown, Kamaleddine will be reaching out to foundations that deal with eating disorders, and is considering starting her own. Through those contacts, she's hoping to fundraise and take on speaking engagements.

“I'd like to speak to schools. I have a sister around that age – she's going through the age where your body is a huge thing and they want to look like girls in magazines. I want to be able to talk to them and reach out.”

The newly crowned Miss Teen East-Central Alberta, 16-year-old Simard, used the opportunity to take her love of animals to the next level. For her platform, Simard focused on animal cruelty and abuse – giving a voice to those that wouldn't otherwise have one.

“I am so passionate about animals. They have helped me through a lot in my life, through anxiety, depression; I don't know a time when an animal's ever made my day worse,” said Simard, who has two rabbits of her own, and two family dogs. “I just thought, I hate the way some people treat animals so I want to be their voice.”

The pageant was also a first for the Bonnyville Centralized High School student. She's been preparing for the competition since submitting her application in December, brushing up on her public speaking skills and walking in high heels.

“I wasn't too scared going there. I was just thinking there are a lot of girls; I didn't think I'd win. Once I had the interview, the nerves hit. On the stage, under my dress, my legs were shaking.”

On the Saturday (March 11), Simard explained the contestants went through the interview and were marked on the swimsuit portion. The following day, the pageant kicks off with the opening number where each girl introduces herself. After a quick change into the evening gowns, Simard's favourite part of the pageant, the girls present their platforms. Of course, it wraps up with the crowing.

“My heart stopped, I couldn't stop smiling,” Simard said of when they called her name. “I felt so proud of myself for accomplishing it and I felt so happy that my voice really meant something to others, it really affected other people.”

Now holding the title of Miss Teen East-Central Alberta, she's waiting anxiously to hear what her assigned charity will be to start fundraising for it. In line with her platform, Simard also plans on doing fundraising for the SPCA.

Both Kamaleddine and Simard will go on to compete for the national title this summer. They are currently in the process of gathering sponsorships to help get them there.

Kamaleddine is preparing to travel to Toronto, ON in July for the Miss World Canada pageant, and Simard will be heading to Miss Teen Canada in August.

Local students leading by example
Jul 4, 2020 10:00 AM
Comments
We welcome your feedback and encourage you to share your thoughts. We ask that you be respectful of others and their points of view, refrain from personal attacks and stay on topic. To learn about our commenting policies and how we moderate, please read our Community Guidelines.