Lakeland students put their cardboard creativity to the test during Skills Alberta’s Northern Cardboard Boat Race at NAIT. On Tuesday, Nov.
0
Nov 27, 2018 1:00 AM By: Robynne Henry 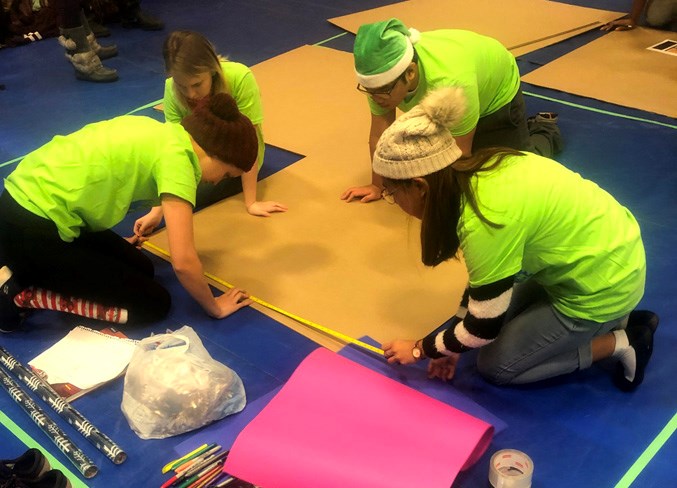 On Tuesday, Nov. 20, groups of four from junior and senior high schools in Northern Alberta worked together to build a cardboard boat that would hold up to the ultimate test: making it across a pool.

Each design was sent sailing across the water loaded up with students to see how long could stay afloat.

“You have to design a boat beforehand. You have from inception-wise, the beginning of September to build a design,” explained Daniel Dargis, NDHS teacher. “You could build it here (at home) and test it in the local pool, refine it, and bring your plans to the competition where they supplied you with the materials.” 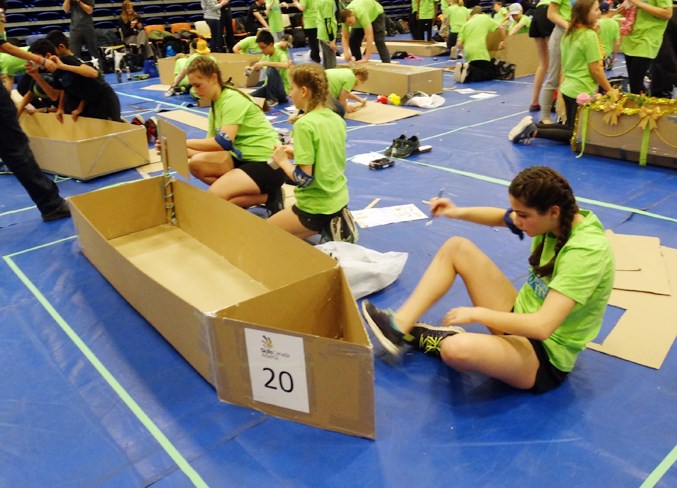 Students from H.E.B. show off their boat building skills.

The overall design was needed before teams could get started on construction. Students were awarded points for how close they could build the boats to match their sketches.

Some of the elements used included packing tape, duct tape, pieces of cardboard, and a mystery item that was revealed the day of.

“This year, it was a skipping rope, and students had to figure out how to incorporate it into their design,” said H.E.B. teacher Lisa Shankowski

“When you’re around a lot of kids the time goes by really fast,” she explained.

The other Glendon group managed to place 38th, while Dr. Bernard Brosseau came in 11th, H.E.B landed in 25th.

One team from Glendon was also awarded the Titanic Award, which is given to the team with the best and most dramatic sinking.

In terms of the senior division, NDHS finished in ninth

“For our first go, the students had an excellent day. It was a good experience for them... It’s nice to see students working really well as a team together,” he recalled.

Cassandra Schmidt, a Grade 11 NDHS student, encouraged others to go see what teams were building for the competition.

“It was really cool, but kind of stressful. We didn’t really get to finish taping the entire boat, and it didn’t end up working out. But, it was a fun experience to be able to go, and have some team building opportunities with other people from my grade,” Schmidt said.

Shankowski, who’s been bringing students to the event for four years, sees the cardboard boat race as a great way for students to practice critical thinking and problem solving skills.

“Basically taking real-life problems, and having them practice solution building. Part of it turns into a cardboard boat race, which is really fun for them,” she expressed.

Jada Kozicky, Grade 8 student at H.E.B., said her team “learned how to use our time wisely,” while constructing their boat. She suggested groups in the future to make their boats smaller to prevent a cave-in during the race portion.