It was a day spent showcasing their talents in the trades when local students took part in the North East Regional Skills Canada Competition.
0
Mar 26, 2019 1:00 AM By: Robynne Henry 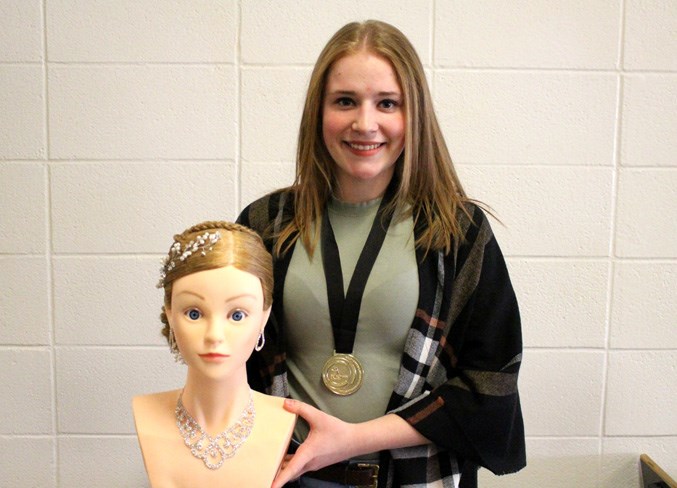 It was a day spent showcasing their talents in the trades when local students took part in the North East Regional Skills Canada Competition.

After participating last year in the braiding category, Anderson said it was great to come back this time with the win.

“This year, I learned more about doing fancier designs and incorporating more things to do an evening, or bridal, or day wear. I learned to do all of these new things, and I was like ‘okay, I love braiding, but I did that last year. Why not bridal?’”

The Skills Canada competitions bring together high school students from across the province to compete in the trades, including baking, carpentry, and video production.

When it was announced that she had placed first, Anderson asked her dad if they had called the right name.

“It was something that showed I had made my mark. I was there and I competed to win. It was really cool, actually, because I’ve never won a medal before.”

As one of the only students from BCHS participating this year, Anderson felt she was representing her school.

“It was a big deal because I was one of the only kids that competed from Bonnyville, and when you go and you’re the only one from your school, you’re not just representing yourself, but, you’re representing your teacher, your school, and your town, as well. It can be a little stressful, but in the end, you come home and you’re like ‘I did it, and I got first place.’ It’s a really big accomplishment.”

Therese Richard, cosmetology instructor at BCHS, was happy to learn one of her students claimed the top prize.

“After seeing all of the other ones, I sat in my house and went ‘come on, she has to win.’ I was glad to hear the news,” she said.

Although she hasn’t won before, Anderson noted it made her work even harder to prepare for this year’s event.

BCHS principal Corey Baker said, “We’re super happy Erin put herself out there, and she was being judged. You have to take a risk and stand up for yourself and be confident in your abilities. She’s building good skills that will serve her well here, and in the future.”

Both Anderson Yukim have earned a spot at provincials in Edmonton in May.

Munday said the competition was a great way for him to work on his passion for video production.

“I knew there were some things that I could improve on, so I think that next year we’ll have a better grasp of what to do. It was my first year, and I was pretty proud of my teammate and I.”