MD of Bonnyville council is looking into the maintenance requirement for the portion of the Iron Horse Trail that goes through the municipality
Jun 4, 2021 12:00 PM By: Robynne Henry 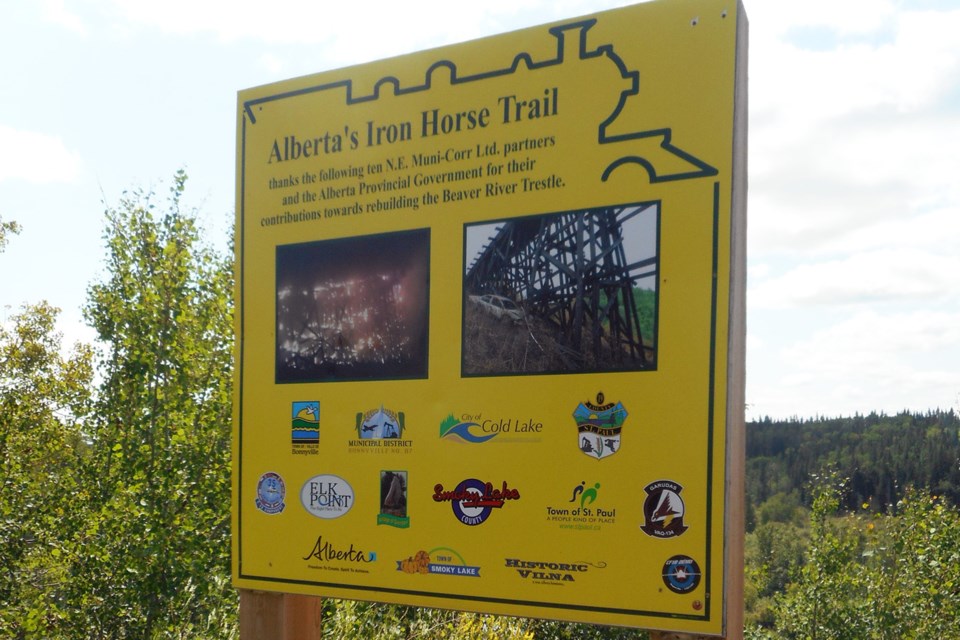 MD of Bonnyville council discussed maintenance requirement for the Iron Horse Trail after being approached by the Village of Glendon to look after a portion of it that they previously paved. File photo.

BONNYVILLE – The MD of Bonnyville is looking for some clarification when it comes to the maintenance of the Iron Horse Trail.

During their June 2 committee meeting, council discussed what their responsibilities were for a portion of the trail they paved that goes through the Village of Glendon.

Coun. Ed Duchesne, who represents the MD on the North East Muni-Corr Trail board, brought the subject up after it was put forward by the village and Muni-Corr representatives.

“There’s been questions being raised about the maintenance of the... portion that we paved through the village,” Duchesne told council. “It’s a maintenance agreement question and it’s been stated that the MD of Bonnyville is supposed to be maintaining a section once it was built and I believe there was no agreement in place when we did pave that (portion).”

There currently isn’t an agreement in place for the MD to look after the portion of the trail and the village and Muni-Corr thought the MD should maintain it, Duchesne stated.

“I’m not sure how we want to proceed with that. I think it’s something that was forgotten during the process of paving that for them and it wasn’t finalized.”

He continued, “I don’t think there was an agreement made for the maintenance of that at all. I don’t remember anything coming across to us and we’ve talked about it with the directors and there’s nothing in place. I think we’ll have to come up with something.”

The MD, along with nine other municipalities, make up the North East Muni-Corr Trail board. The non-for-profit board acquired the land in 1999 and it eventually became the Iron Horse Trail. An agreement was signed by everyone involved, which included the requirement that each community was responsible for the maintenance of the portion of the trail that went through their area.

When the question was raised about who was in charge of looking after the stretch of trail through Glendon before the MD paved it, Reeve Greg Sawchuk noted it was the responsibility of the village.

“Each municipality looks after their own maintenance,” he explained.

Coun. Mike Krywiak agreed, “There was nothing in the agreement that the MD will be taking care of the trail. We thought they would be happy with us paying for paving a portion. I don’t recall any such agreement at all. It’s up to each municipality to do their own.”

CAO Al Hoggan suggested administration look into the maintenance and report back to council in two weeks with their findings.

“At that point, we’ll have much better answers to what the agreement says and potentially have reached out to some of the stakeholders to see what they would like us to do.”

This isn’t the first-time council has discussed Glendon and their portion of the Iron Horse Trail. They passed a motion during their Oct. 21 meeting to deny a $25,000 annual grant to the village and recommended each municipality ‘maintain the sections of the Iron Horse Walking Trail within their own municipal boundaries.’

MD council will discuss the matter further at their June 15 meeting, including the agreement with Muni-Corr and what exactly their responsibilities are for the part of the trail that goes throughout the municipality.