The Town and MD of Bonnyville officially announced they adopted their Intermunicipal Collaboration Framework agreement on April 14
Apr 14, 2021 10:15 AM By: Robynne Henry 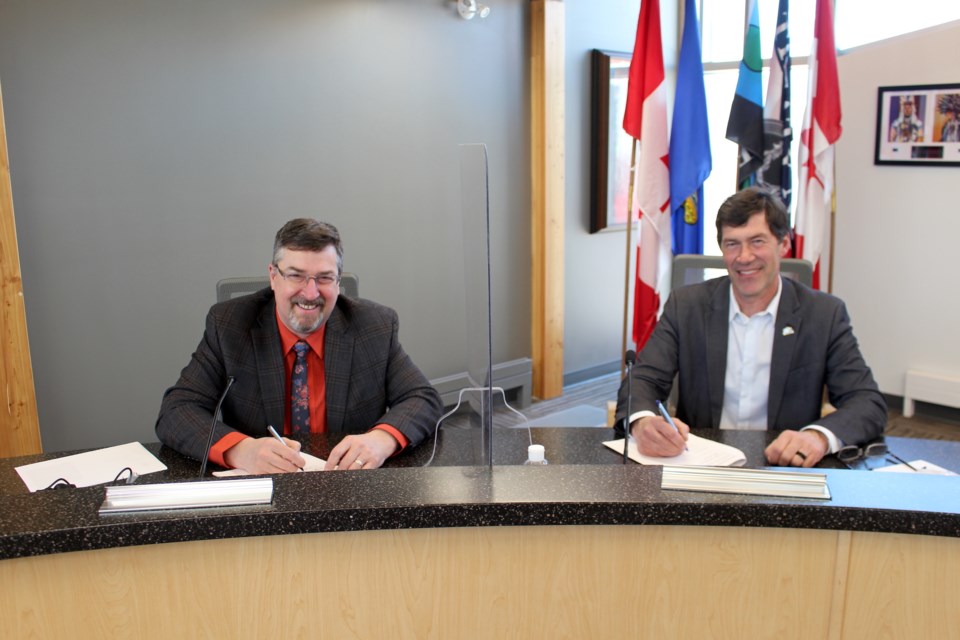 BONNYVILLE - The Town and MD of Bonnyville have put pen to paper for their Intermunicipal Collaboration Framework (ICF) agreement.

The ICF directs communication and cooperation on services utilized by residents from both municipalities.

Based on negotiations, the MD will pay the town a lump sum cost-share calculated at $1.5-million for a list of various services that they provide. Any future variance or change to the calculation will be discussed by a joint Intermunicipal Committee for consideration and approval.

“This ICF solidifies the cooperative relationship the MD has long had with the Town of Bonnyville,” said MD Reeve Greg Sawchuk in a press release. “Our council continues to be in favour of providing financial support to the town where justified and when calculated through a transparent and fair process.”

There were a couple of factors that went into determining the amount the MD would provide, including how many MD residents live within the town's service area, and the population of the town itself.

The municipalities already have agreements in place, which weren't included in the most recent ICF agreement, as they share the costs for the Bonnyville Regional Fire Authority (BRFA) and 911 centre, and the Bonnyville and the District Centennial Centre.

In a press release, Town Mayor Gene Sobolewski said, “The Town and the MD of Bonnyville continue to enjoy a positive cooperative and collaborative relationship to the benefit of our region. The ratification of the ICF further demonstrates our resolve to better our town and the region in our ongoing effort to provide efficient service delivery to our rate payers. I congratulate the town and MD councils for making this possible.”

The Municipal Government Act (MGA) required towns, cities, municipal districts, villages, among others who share a common boundary to create an ICF by April 1. As part of the ICF agreement, the municipalities will come together again in five years to review the document.