The Town of Bonnyville will be making some anticipated upgrades to the pool this year, after receiving $125,000 in grant funding from the province.
May 22, 2018 1:00 AM By: Meagan MacEachern 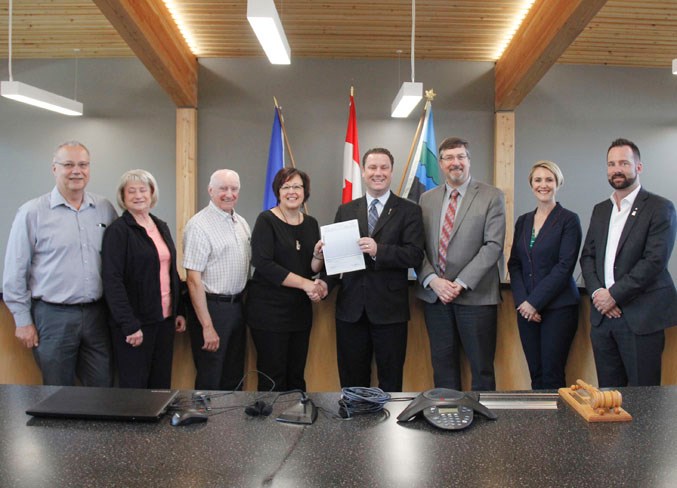 The Town of Bonnyville accepted a $125,000 cheque from Bonnyille-Cold Lake MLA Scott Cyr. The funding will be put towards upgrades to the local pool.

The Town of Bonnyville will be making some anticipated upgrades to the pool this year, after receiving $125,000 in grant funding from the province.

Through Alberta’s Community Facility Enhancement Program (CFEP) the Town of Bonnyville will be able to strike some things off of their must-do and want-to-do lists when it comes to the Bonnyville Pool.

“We have more needs at the pool than we have money to do it. In addition to all of the non-fun stuff, like filtration system improvements, heating system upgrades, we could spend millions and no one would ever know that we did anything. What we have been trying to do is triage a balance of must-do items and nice-to-do items,” explained assistant CAO for the Town of Bonnyville Bill Rogers.

The application for the CFEP grant was submitted in 2017. At the time, the town had capital funding set aside for some necessary repairs to the pool, including a new roof, filtration system upgrades, and improvements to the a-track system.

The town also had adding more features to the pool, such as a disability access chair or lift, on their radar.

Thanks to the provincial funding presented to the town on Friday, May 18, these items and more will be completed, hopefully before the new year.

“It’s fantastic, because a lot of people were talking about the improvements that are needed, and the town’s budgeting. Funds are a premium, and it’s nice to be able to get this funding to help assist,” Mayor Gene Sobolewski expressed.

Through the results of a recent Investing in Community Infrastructure survey conducted by the town, council realized just how important recreation is to not only town residents, but the region as a whole.

“As a result of the survey, the pool is a major concern and a major issue. There’s a lot of improvements necessary. This funding is going to go a long way in assisting, and it’s going right into the pot, right into the pool,” said Sobolewski. “We have a lot of life left in our existing pool, but there are repairs, maintenance, there’s things that have to be done. Unfortunately, with prior constraints and things like that, it just wasn’t a large priority. Now it is.”

Bonnyville-Cold Lake MLA Scott Cyr presented town council with the $125,000 cheque, and said he was happy to see the pool upgrades forge ahead.

“It’s something that I think is a good project moving forward. I think the Province of Alberta made a wise decision when they decided northeastern Alberta is a priority.”

He continued, “Getting our local youth engaged in sports and activities is a win for everybody, especially for them when they want to be out there releasing some of that energy. I have to say, whenever we have any project that moves the community forward in a very positive way like this, that’s good for everyone.”