Trails within the MD of Bonnyville getting worked on this year 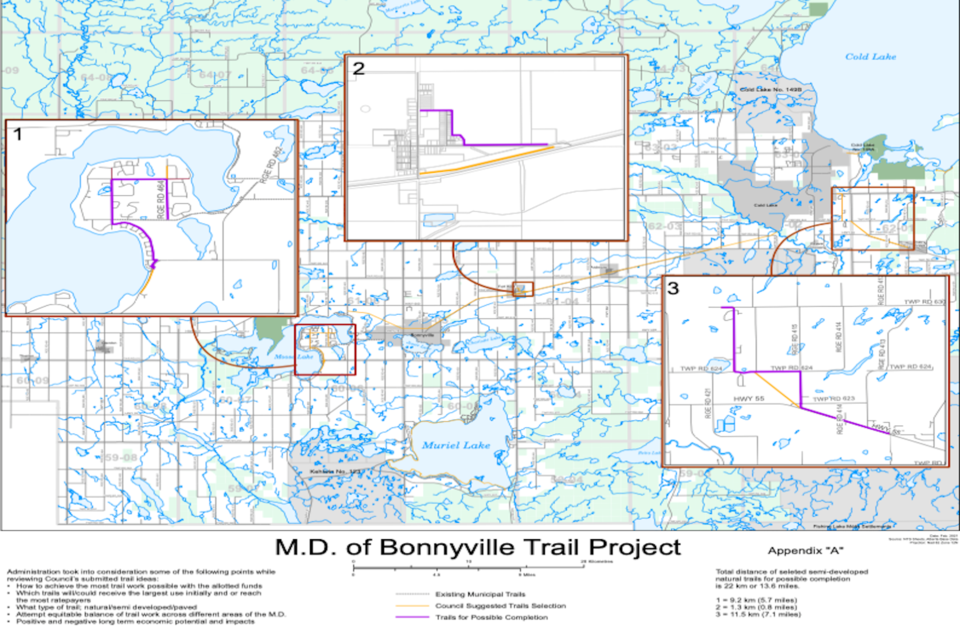 The MD of Bonnyville will be working on roughly 22-kilometres of semi-developed and natural trails in the coming year. File photo.

BONNYVILLE – Some trails within the MD of Bonnyville will get a facelift in the coming year.

Council passed a motion during their Feb. 17 meeting to complete approximately 22-kilometres of semi-developed and natural trails in 2021.

The MD defines a semi-developed trail as a smooth compacted service made of shale, crush, or gravel. It’s intended use is in medium-density areas and through parks, playgrounds, and multi-use trails.

Unsurfaced soil or turf that has no subgrade or base is what makes trails fall under the natural category. They’re best used in areas such as park reserves and forested trails.

Coun. Ed Duchesne was the only one to vote against the motion as he believes the $1-million the MD has put toward trail construction for the year is too much.

“You guys are spending way too much money on underutilized trails,” he told council.

Coun. Darcy Skarsen disagreed, “If you think they’re underutilized, Coun. Duchesne, I think you should spend a little more time over there because they’re very popular.”

The trails that would be worked on include one by Moose Lake by Rage Rd. 464, one surrounding Fort Kent, and a Cherry Grove trail that will see construction begin at Hwy. 55 to Twp Rd. 630.

Caroline Palmer, general manager of planning and community services for the municipality, explained administration took a number of considerations into account to pick which trails to add to the list after receiving feedback from council.

“How to achieve the most trail work possible with the allotted funds for 2021, which trails could receive the largest use initially or reach the most ratepayers, what type of trail, natural, semi or developed, paved, attempt equitable balance of trail work across different areas of the MD, and positive and negative long term economic potential impacts,” she said.

Palmer noted the total length of constructed trails may vary "depending on engineering requirements under submissions and budget limitations."

MD administration also included ways the trails could be updated in the future, which Skarsen was in favour of.

“I think it’s good and gives you the opportunity to grow or to upgrade it later on.”

Semi-developed and natural trails would include amenities such as bridges or culverts for pedestrians if they were needed, recycling containers, benches, parking, toilets and signage.

The maintenance requirements for the natural trail will be dependent on budgeting restrictions and availability, while litter and recycling would need to be picked up by MD staff.

The semi-developed trail would also need to be cleaned and would also require its surfaces and amenities to be repaired or serviced. Snow removal and sanding in the winter months would also be required, along with mowing and weed removal.