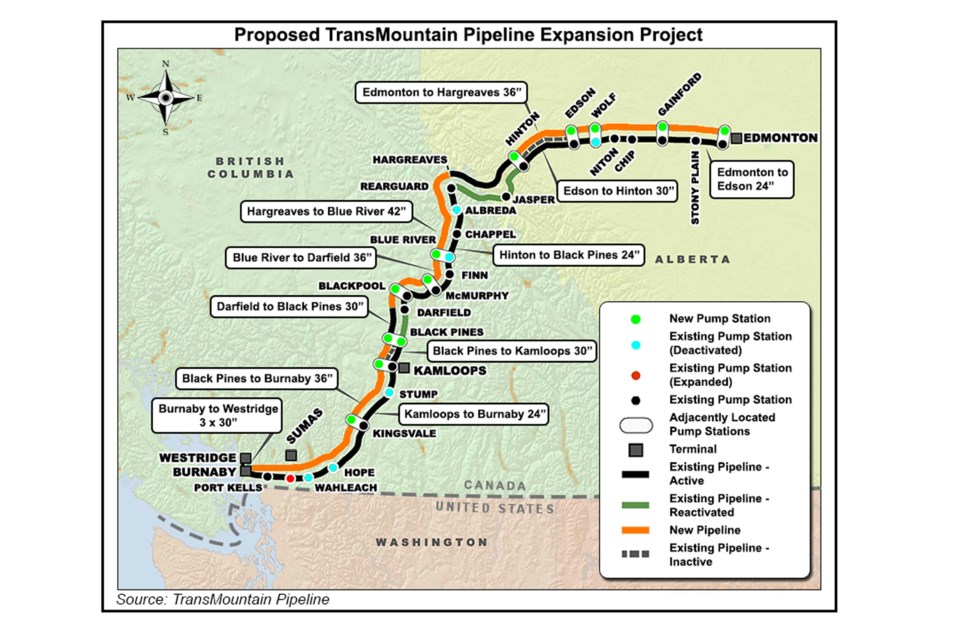 The Trans Mountain Expansion project is one-step closer to completion after the Federal Court of Appeal dismissed a legal challenge. File photo.

LAKELAND – The Trans Mountain Expansion passed another hurdle when the Federal Court of Appeal dismissed legal challenges regarding the federal government’s indigenous consultation.

Lakeland MP and shadow minister for natural resources, Shannon Stubbs, said the ruling is welcome, but it’s not enough.

“The reality is the (federal) Liberals’ mistakes and failures directly delayed the Trans Mountain Expansion by more than two years. It was supposed to enter service two months ago, in December 2019, but instead, that was when construction started,” she noted in a press release.

It was announced on Feb. 4 the court had rejected the First Nations communities’ protests filed after the project was approved for a second time in June 2019.

Stubbs continued, “When asked, the finance minister (Bill Morneau) wouldn’t say all the legal obstacles to the construction of the Trans Mountain Expansion ended with this ruling. He cannot confirm this because groups opposed to the Trans Mountain Expansion currently have an application before the Supreme Court challenging the Liberal’s second approval of the project in June of 2019. This doesn’t include the speculation by parties to this legal challenge that they would appeal as a result of the ruling to the Supreme Court in the near future.”

Representatives from the Coldwater Indian Band, Squamish Nation, Tsleil-Waututh Nation, and the Ts’elxwéyeqw Tribe, who are among the indigenous communities involved in the appeal, outlined to the court how they weren’t adequately consulted by the federal government. In the ruling, the court found the Government of Canada had “engaged in adequate and meaningful consultation with indigenous peoples.”

This means the construction of the 1,150-kilometre pipeline expansion from Strathcona County to Burnaby, BC, which will increase the capacity from 300,000 barrels per day to 890,000 per day, can continue.

Stubbs noted that while this is a step in the right direction for the project, there are still a lot of unknowns.

“There’s no public timeline, in-service date, or budget for the construction. The Liberals have no plan to deal with anti-energy activists that are prepared to break the law to stop this project.”

Bill C-69, which Stubbs described as the “no more pipelines bill”, is something that “private sector experts and economists say will result in no new private sector pipelines proposed or built in Canada.”

She added, “There’s no plan to give the private sector the confidence to invest in building the new infrastructure required to get Canadian energy to global markets.”

The Trans Mountain Expansion originally received approval in 2016. That decision was turned down two years later when the Federal Court of Appeal found there was insufficient consultation with indigenous communities and the impact on marine life in British Columbia wasn’t taken into account.

The expansion was given the green light again in June 2019, and indigenous communities requested the court review it for a second time.

Stubbs stressed that the federal government owes Canadians more when it comes to the Trans Mountain Expansion.

“The Liberals failure to use the full powers available to them to move the project forward and their continued moving of the goal posts to approve the Teck Frontier oil sand mines, is what’s causing the crisis in confidence of job creators and investors that Canada is a place where big infrastructure projects can still be built.”

BCHS raises the curtain on The Drowsy Chaperone
Feb 23, 2020 3:00 PM
Comments
We welcome your feedback and encourage you to share your thoughts on this story. We ask that you be respectful of others and their points of view, refrain from personal attacks and stay on topic. To learn about our commenting policies and how we moderate, please read our Community Guidelines.