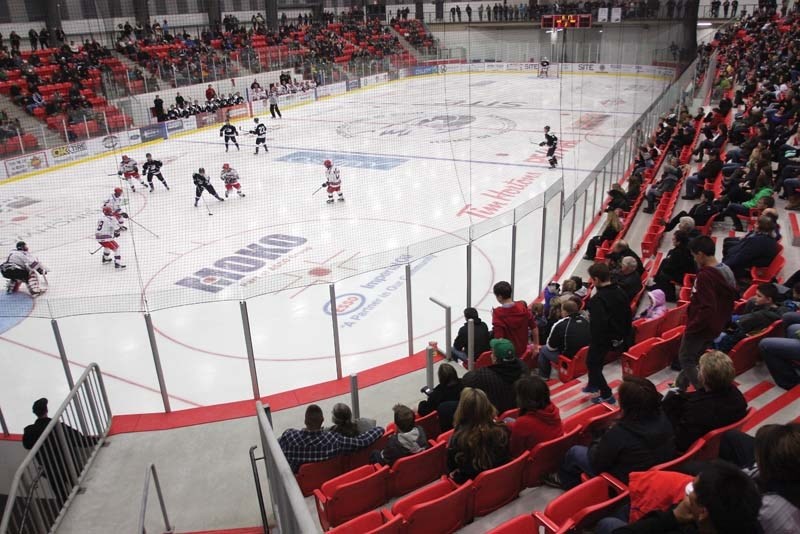 The City of Cold Lake will be looking into installing handrails in the Energy Centre arena after being approached by the local age friendly society. File Photo

COLD LAKE - Age Friendly Cold Lake is holding onto hope that the City of Cold Lake will install handrails at the Energy Centre.

This is one of the ways they're pitching the city can help make Cold Lake a more age-friendly place to live.

"One of the things we came across in our discussion with seniors over the last year or so was that very issue at the Energy Centre," she outlined.

Seniors attending the Energy Centre to watch their grandchildren play hockey were intimidated by the stairs at the arena.

"There's nothing to hold onto, there's no railing. That stopped some of them from going," expressed Stonehocker.

The question isn't if council will approve the installation, but which ones. During their corporate priorities meeting on Tuesday, April 20, they discussed the options out there and how they hold up to one another.

CAO Kevin Nagoya said administration is proposing handrails be placed in the main corridor stairs. In order to allow attendees to watch a game or event without obstruction, and to remain within fire code, their suggesting a gap between them every few feet.

This also allows for someone to get from one side of the stairs to the other without issue.

Coun. Bob Buckle liked the idea of limiting the locations of the handrails.

“I am with Bob, less is better, but it is nice to have a place to walk up and down the steps and have some security while doing it,” Coun. Vicky Lefebvre agreed.

In addition to presenting them with the concept, they provided council with some options in terms of handrail style. While one possibility was a standard handrail that divided the stairs in two with a break every three steps, others were a single rail on each step.

While the second design would allow for a completely unobstructed view, it wasn't Coun. Duane Lay's favourite. He noted those needing to use the handrails would have to reach from one to the next, which could be a cause for disaster.

Coun. Kirk Soroka suggested reaching out to the Cold Lake Age Friendly Society to see what they think.

“I am kind of in the same boat as Duane, partially because he is the one that has the most experience with these kinds of things, so I would follow his lead,” he said.

“You never realize until you’re in that place... you start to see things through their eyes," expressed Coun. Chris Vining, adding council should consider handrails for the Reid Field House and North Arena as well.

Nagoya noted what the city adopts at the Energy Centre may become municipal standard, something council will have to keep in mind as they discuss the topic further.

Stonehocker was glad to see council was considering their request.