The Cold Lake John Howard Society had to stop offering their Mat Program due to a funding shortfall, however, they continue to help those in need with outreach services and a space to get out of the elements and enjoy a hot meal.
Jul 4, 2021 10:00 AM By: Meagan MacEachern 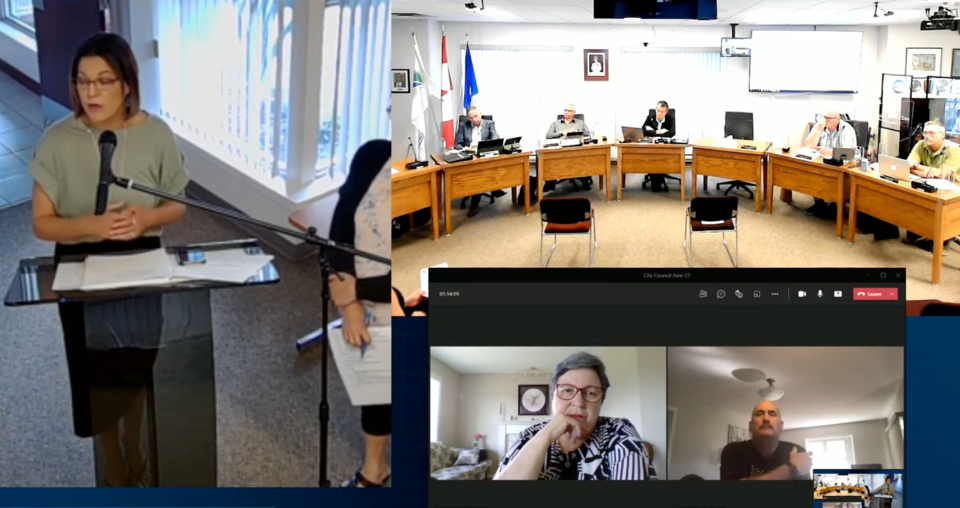 Candace Sutterfield, board member for the Cold Lake John Howard Society, explains their programming to city council during a meeting in June. File Photo

COLD LAKE - The Cold Lake John Howard Society is providing more than just a roof over the heads of those without a home; it's offering programming that could change their lives.

“There’s nowhere else for these individuals to get the programming and the positive environment they are making for them,” expressed Cold Lake RCMP Sgt. Ryan Howrish during the society's delegation to city council in June.

He explained how police officers are noticing a difference in the people the local John Howard Society helps.

“We are really appreciative of their efforts,” Howrish said.

The Cold Lake John Howard Society is a non-profit organization that offers "support for members of the community through increased awareness of social justice, crime prevention, and public safety education," their website states.

In addition to acting as a place to escape the elements, they offer outreach programming and meals.

According to Candace Sutterfield, board member for the local John Howard Society, they were forced to discontinue their overnight program due to insufficient funds.

During the months it did run, the Mat Program was well utilized.

In March they had 67 individuals spend the night, which increased to 94 in April, 109 in May, and up until June 8, when the program was finished, they had 26.

The initial $75,000 in funding they had received for the overnight shelter through the Alberta Rural Development Grant has run out, and the costs are too high to continue to offer it, Sutterfield detailed.

She added, one of their biggest expenditures was security.

“Security was kind of a kicker, but we brought security in from the advice of the city, and also for the safety and security for the individuals themselves and also our paid staff,” she explained.

Without the Mat Program, most of their usual clientele are either camping or sleeping in the banks.

Sutterfield noted that it's normal for these programs to stop running during the warmer months, and the society continues to offer their daytime services while searching for funding so they can once again open their doors for the Mat Program.

For the most part, the society runs through the work of volunteers and Portage College students completing their practicum, aside from the outreach worker who is a paid member of city staff and works Tuesday to Thursday, 9 a.m. to 3 p.m.

According to city CAO Kevin Nagoya, the money to cover the position was provided through Alberta's MOST fund.

“A lot of people utilizing that building aren’t houseable at this point – they're on the streets, they are unkept, their addictions and mental health may have already spiraled out of control – with that outreach portion, at the end of the day, what we’re really hoping for is to get these individuals from here to here, so they can be houseable,” Sutterfield stressed, adding simple steps that may seem easy to the average person can be quite challenging for someone suffering from mental health issues or an addiction.

She continued, “Outreach is pretty unique, no other community was doing the outreach portion of it."

Coun. Chris Vining said the benefits of a program like this include a decrease "in social disorder."

This could include aggressive panhandling and people hanging out in back alleyways.

Howrish said he asked his supervisors if their officers had noticed a decrease in criminal activity, like the instances Vining had mentioned, in the downtown area.

He continued, "Across the board, from the members who are down there arresting the individuals they are used to arresting, they're saying there's a huge difference."